Sticky bombs, assembled in Afghanistan, can be detonated remotely or with a time-delay fuse and are powerful enough to blow up a car 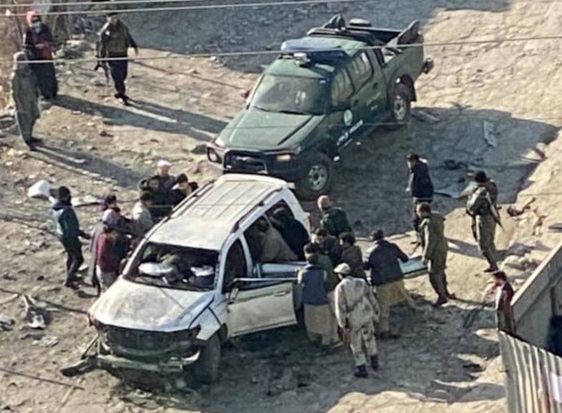 People stand around a car damaged in a bomb attack on the street in Kabul, Afghanistan December 15 2020 in this picture obtained from social media. Picture: REUTERS/TAMANA ASHNA/SUPPLIED

Kabul — Killings by small, magnetic bombs slapped under vehicles are unnerving Afghan officials, activists and journalists, who blame the Taliban for the attacks that are increasing, despite peace talks aimed at ending two decades of war.

At least 10 government officials and their aides have been killed by “sticky bombs” in recent weeks, mostly in the capital Kabul. The tactic, senior security officials and Western diplomats say, is meant to instil fear while avoiding large-scale civilian casualties.

“Internal intelligence memos reveal that the Taliban are systematically eliminating mid-career, ambitious government officials and other prominent individuals who are clearly against their hardline stance,” said a senior Western diplomat responsible for Afghanistan.

The rebels “are not killing the government's top brass as they can't afford to generate large-scale furore, for it would impinge upon the peace process,” the diplomat told Reuters on condition of anonymity, as he is not authorised to speak to the media.

A Taliban spokesperson said the group was behind some of the attacks but targeted only officials of the government that the group is both warring and negotiating with.

“We will continue to target the enemy and continue to eliminate important government figures, but not journalists or social activists,” said Zabihullah Mujahid, a spokesperson for the militant group.

“We are directly attacking those people who are fighting against us either on the battlefield or those plotting against us from their government offices.”

Afghanistan’s interior ministry blames the Taliban for all the sticky bomb attacks.

Taliban leaders are in neighbouring Pakistan during a break in the peace talks in the Qatari capital Doha, which have taken three months to agree on procedural ground rules. The rise in violence mars the best hope for ending the war that has ravaged Afghanistan since the 2001 attacks on the US.

“Despite the talks, the militants were achieving desired the results of inculcating tremendous fear,” the diplomat said.

The militants have also stepped up widespread attacks against government forces in the provinces in an effort to establish new strongholds.

Sticky bombs, assembled in Afghanistan, can be detonated remotely or with a time-delay fuse and are powerful enough to blow up a car. They have been used since the early years of the war to sow terror among Afghans and expatriates working to safeguard the economy and fragile democracy.

The devices can be crude or sophisticated — but planting them is cheap, simple and hard to defend against.

Recent arrests reveal that target vehicles were stuck in traffic, where attackers on motorbikes or on foot could attach a bomb.

“In most cases young men were also involved in sticking magnetic bombs for a small amount of cash,” said Rahmatullah Andar, a spokesperson for the National Directorate of Security, Afghanistan's anti-terror agency.

Rising unemployment due to Covid-19 has made it easier for the Taliban to recruit young boys who wash cars on the side of the roads, vendors and beggars to collect information on intended targets, said another official at the directorate.

Although the sticky bomb attacks remain sporadic, they are having a psychological effect.

“After breakfast, I take a few minutes to think which route I should take to work to stay alive,” said Rahmatullah Rahim, a bureaucrat in the ministry of law and justice. “The fear is intense.”

MTN terror financing case now in the hands of US judge