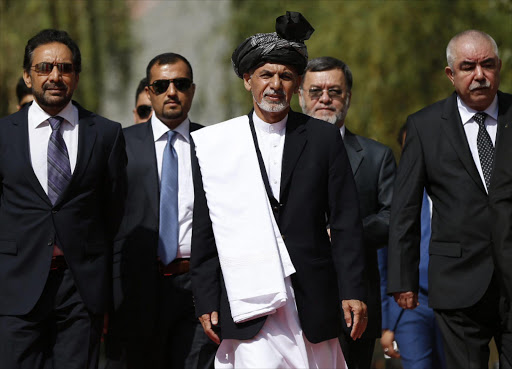 Kabul — Afghan President Ashraf Ghani wants Taliban fighters to integrate into the country’s armed forces and join efforts to eliminate Islamic State (IS) militants, the first clear indication of the government’s vision for its defence and security apparatus if peace talks in Qatar progress.

“The reason we want peace with Taliban” is because once the militants are re-integrated into Afghan society “we will be able to isolate these much more larger networks” of the IS and Al-Qaeda, Ghani said at the Doha-based think-tank Centre for Conflict and Humanitarian Studies.

During a two-day state visit to Qatar that ended on Tuesday, Ghani met with local leaders and his own government’s negotiators to push peace efforts forward. US special envoy on Afghan reconciliation, Zalmay Khalilzad, is also in the Persian Gulf country to support the process.

Despite a month of talks, Afghan government representatives and the Taliban are yet to agree on a code of conduct or procedural rules intended to guide the formal talks ahead. The main sticking points relate to the type of Islamic jurisprudence meant to serve as legal guidance for the talks and whether a US-Taliban peace deal reached in February would serve as the basis of the talks.

Fears of heightened IS recruitment are growing with the militants hoping to gain power while the Taliban is looking to become part of the future government.

“The US-Taliban deal is a major opportunity for IS to recruit,” said Kamran Bokhari, an analyst on South Asia for Washington-based Centre for Global Policy. “The current climate represents fertile ground for IS to attract the more radical fighters among the Taliban, who are susceptible to its narrative that the Talibs have compromised on the jihadist cause.”

The US is pulling troops out of Afghanistan after their agreement with the Taliban. US President Donald Trump, who is seeking re-election next month, had pledged to get his country out of “endless wars”. The US has already reduced forces to about 8,000, handed over some bases to the Afghan government and is looking to withdraw all forces by May next year.

Under the terms of that deal, the Taliban is committed to stop attacking American forces and prevent the nation from becoming a safe haven for terrorists such as the IS and Al-Qaeda or other terrorist groups that pose a threat to Afghanistan or the West.

According to the UN, the IS has as many as 4,000 fighters in Afghanistan, mostly in the country’s east, and have created a network of cells in many cities including Kabul. The Taliban views them as foreigners and is currently fighting them over territorial gains.

The IS is said to be responsible for some of the worst attacks on civilian gatherings and Afghan army including one on a prison in eastern Jalalabad city where they freed about 400 of their prisoners and killed 40 people. An attack on a Shiite wedding party in capital Kabul late last year killed more than 60 people.

Former president Hamid Karzai has said such attacks are likely to continue until the government and the Taliban reach an agreement.

Taliban ceasefire hinges on agreement with US negotiators

The appointments, including several military officials to top posts, follow a coup in August that deposed President Ibrahim Boubacar Keita
World
11 months ago
Next Article

Afghan reconstruction cost US $130bn and 5,100 dead or injured

Afghan reconstruction cost US $130bn and 5,100 dead or injured