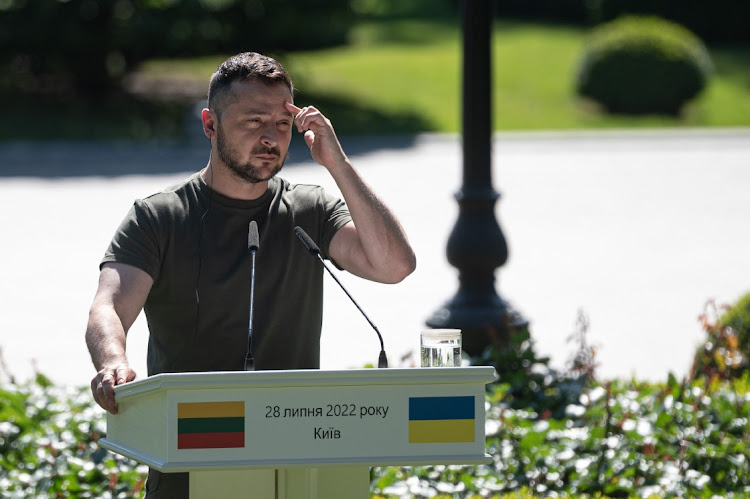 Ukrainian President Volodymyr Zelensky dismissed the importance of the first grain export shipment from his country since Russia invaded, saying it was carrying a fraction of the crop Kyiv must sell to help salvage its shattered economy.

His downbeat comments, via video to students in Australia on Wednesday, came as an inspection of the ship was completed in Turkey before it continues to its final destination in Lebanon under a deal aimed at easing a global food crisis.

The ship, Razoni, departed from Ukraine’s Odesa port on the Black Sea early on Monday carrying 26,527 tonnes of maize to Lebanon’s Tripoli. It followed a UN-brokered grain and fertiliser export agreement between Moscow and Kyiv in July — a rare diplomatic breakthrough in a drawn-out war of attrition.

But Zelensky, speaking via an interpreter, said more time was needed to see whether other grain shipments would follow.

“Just recently, thanks to the UN in partnership with Turkey, we had a first ship with the delivery of grain, but it’s still nothing. But we hope it’s a tendency that will continue,” he told the students.

He said Ukraine had to export a minimum 10-million tonnes of grain to urgently help bring down its budget deficit which was running at $5bn a month.

A senior Turkish official said three ships could leave Ukrainian ports daily after the Razoni’s departure, while Ukraine’s infrastructure minister said 17 more ships had been loaded with agricultural produce and were waiting to set sail.

Known as Europe’s breadbasket, Ukraine hopes to export 20-million tonnes of grain held in silos and 40-million tonnes from the harvest now under way, initially from Odesa and nearby Pivdennyi and Chornomorsk.

“The war ... is almost killing the economy. It’s in a coma,” Zelensky added. “Russia’s blocking of the ports is a great loss for the economy.”

The president has repeatedly warned that Moscow may try to obstruct exports despite signing up to July’s deal.

Russia, which blockaded Ukraine’s ports after beginning on February 24 what it called “a special military operation”, has said it wants to see more done to facilitate the exports of its own grain and fertilisers. But it has hailed the departure of the first grain ship from Ukraine as positive.

It has denied responsibility for the food crisis, saying sanctions by the West, which regards the war as an unprovoked imperial-style Russian land grab, have slowed its exports.

The exports from Ukraine, one of the world’s top grain producers, are intended to ease price rises and shortages, with famine looming in some parts of the world.

“The good news is that the Kremlin wants a negotiated solution,” Schroeder told Stern weekly on Wednesday, adding he had met Putin in Moscow last week.

“A first success is the grain deal, perhaps that can be slowly expanded to a ceasefire.”

Ukraine’s General Staff on Wednesday catalogued continued heavy Russian shelling of Kharkiv and other towns and villages in its vicinity, as well as air and missile strikes on civilian objects. Moscow denies deliberately targeting civilians, something which it accuses Kyiv of doing.

Reuters was not able to verify battlefield reports.

Zelensky, in a late night address on Tuesday, said that his forces could not yet overcome Russian advantages in heavy guns and manpower despite arms supplies from the West.

“This is very much felt in combat, especially in the Donbas ... It is just hell there. Words cannot describe it,” he said.

Russia is battling to take full control of Donbas, the heavily industrialised part of eastern Ukraine.

It said at the UN that the conflict did not warrant Moscow’s use of nuclear weapons, but that it could decide to use its nuclear arsenal in response to “direct aggression” by countries of the Nato military alliance.

US ambassador to the UN Linda Thomas-Greenfield says US sanctions on Russia are intended to discourage the Russians from continuing their aggression ...
World
5 days ago

The world’s biggest soft-drinks producers cut ties with Russia over the Ukraine conflict, creating opportunity for Russian businesses and ...
Companies
4 days ago
Next Article