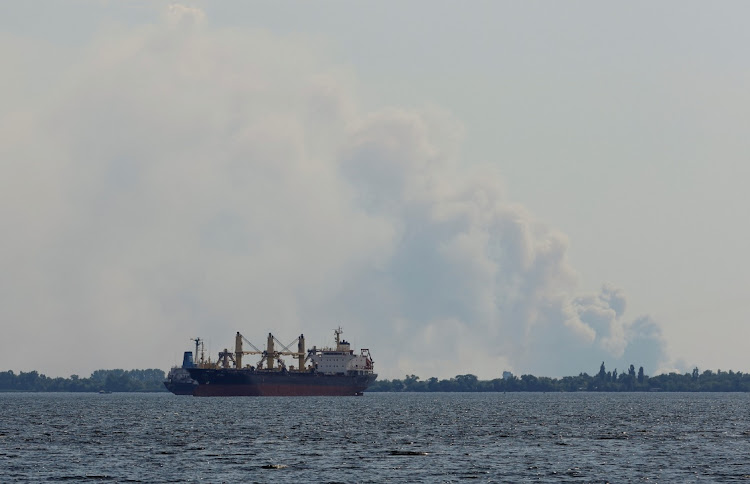 Smoke rises behind vessels on the Dnipro River during Ukraine-Russia conflict in the Russia-controlled city of Kherson, Ukraine, in this July 24 2022 file photo. REUTERS/ALEXANDER ERMOCHENKO

Kyiv — Ukraine stepped up its drive to retake the Russian-controlled south of the country by trying to bomb and isolate Russian troops in hard-to-resupply areas but said it saw evidence that Moscow was redeploying its forces to defend the territory.

Ukraine said on Thursday its planes had struck five Russian strongholds around the city of Kherson and another city in the area.

British military intelligence, which helps Ukraine, said it was likely that Ukrainian forces had also established a bridgehead south of a river that runs along the wider Kherson region’s northern border. “Ukraine’s counteroffensive in Kherson is gathering momentum,” it said in a statement.

Ukraine has retaken some small settlements in the north of the region in recent weeks as it tries to push Russian forces back, a potential prelude to what Kyiv has billed as a major counteroffensive to retake the south.

Russia said it was unfazed by Ukraine’s efforts. The Russian defence ministry said its planes attacked a Ukrainian infantry brigade in the far north of the Kherson region and killed more than 130 soldiers in the past 24 hours.

Kirill Stremousov, the deputy head of the Russian-appointed military-civilian administration running the Kherson region, has also dismissed Western and Ukrainian assessments of the situation.

Ukrainian President Volodymyr Zelensky’s “statement that Kherson region will be liberated in three to six weeks is ... a lie. All these counteroffensives that result in a large number of Ukrainian casualties are coming to nothing,” Stremousov told Russia’s RIA news agency on Wednesday.

Ukraine has used Western-supplied long-range missile systems to badly damage three bridges across the River Dnipro in recent weeks, making it harder for Russia to supply its forces on the western bank.

British intelligence said the strategy was starting to isolate Russian forces in the Kherson region. “Russia’s 49th Army, stationed on the west bank of the Dnipro River, now looks highly vulnerable,” it said in an intelligence bulletin.

Kherson city is now virtually cut off from the other territories occupied by Russia. “Its loss would severely undermine Russia’s attempts to paint the occupation as a success,” it said.

A Ukrainian strike on Wednesday on the Antonivskyi bridge, the sole span serving Kherson city, prompted its closure to traffic. That forced Russia to open a ferry service, the route of which it said would constantly change for security reasons.

Oleksiy Danilov, secretary of Ukraine’s National Security and Defence Council, tweeted that Russia was concentrating “the maximum number of troops” in the direction of the Kherson region but gave no details.

Oleksiy Arestovych, an adviser to Zelensky, said Russia was conducting a “massive redeployment” of forces from the east to the south in what amounted to a strategic shift from attack to defence.

RIA reported on Thursday that Russian security services had uncovered a group of Ukrainian agents in Kherson who had been paid to pass on the map co-ordinates of Russian forces there to Ukraine for targeting with artillery.

Zelensky said Ukraine would rebuild the Antonivskyi bridge over the Dnipro and other crossings in the region. “We are doing everything to ensure that the occupying forces do not have any logistical opportunities in our country,” he said.

Oleksiy Gromov, senior member of the Ukraine military’s General Staff, told a news briefing that the bridge was of great importance for the Russian defence and for Ukraine’s attempted offensive. “We have repeatedly struck the Antonivskyi bridge ... There is significant damage to the bridge’s structures,” Gromov said.

Fierce fighting is also under way in eastern Ukraine, where Russia is trying to take control of the entirety of the industrialised Donbas region.

Ukraine confirmed that Russian forces had captured the Soviet-era coal-fired Vuhlehirsk power plant, Ukraine’s second largest, in what was Moscow’s first significant gain in Donbas in more than three weeks. But it played down the importance of the setback.

Since Russia invaded its neighbour to the east in February this year, thousands have been left dead, injured and displaced, with the world economy in ...
World
1 week ago

The EU has decided to renew sanctions against Russia for a further six months, until the end of January 2023
News & Fox
1 week ago

Group revenue rose 31% in the firm's half-year to end-June, but profit climbed only 8%, with the conflict hitting demand for agrochemicals
Companies
1 week ago

Fate of Ukraine’s second-biggest power plant in the balance as Russia says it has overrun it, but Kyiv refuses to confirm
World
1 week ago
Next Article