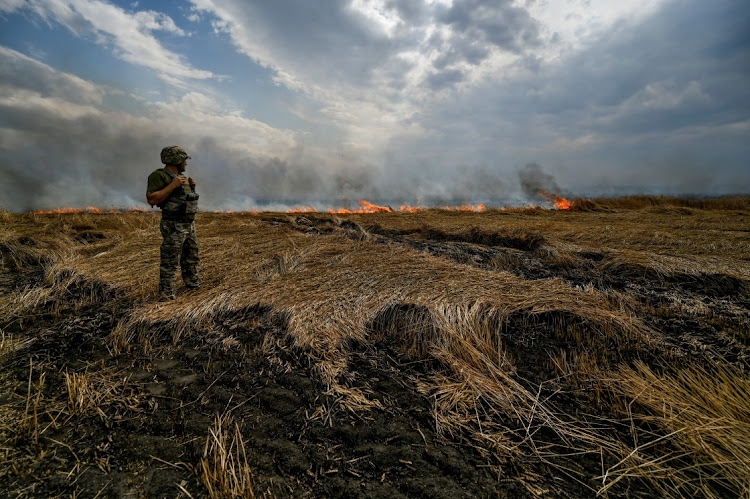 A Ukrainian serviceman stands on a burning wheat field on a border between Zaporizhzhia and Donetsk regions, Ukraine, July 17 2022. Picture: DMYTRO MOLIENKO/REUTERS

Kyiv — Ukraine pressed ahead on Sunday with efforts to restart grain exports from Black Sea ports after a missile attack on Odesa raised doubts about whether Russia would honour a deal aimed at easing global food shortages caused by the war.

President Volodymyr Zelensky denounced Saturday’s strikes as “barbarism” that showed Moscow could not be trusted to implement a deal struck just one day earlier with Turkish and UN mediation.

Public broadcaster Suspilne quoted the Ukrainian military as saying after the strike that the missiles did not hit the port’s grain storage area or cause significant damage and Kyiv said preparations to resume grain shipments were ongoing.

“We continue technical preparations for the launch of exports of agricultural products from our ports,” infrastructure minister Oleksandr Kubrakov said in a Facebook post. 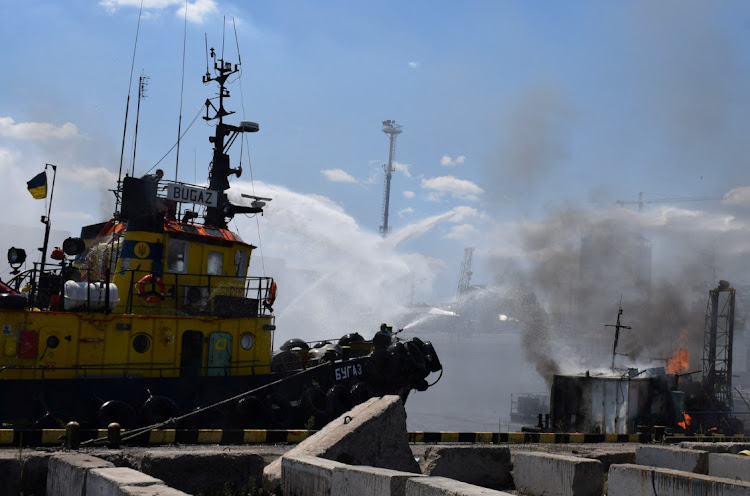 Firefighters work at a site of a Russian missile strike at the Port of Odesa, Ukraine, July 23 2022. Picture: UKRAINIAN ARMED FORCES/REUTERS

Russia said its forces had hit a Ukrainian warship and a weapons store in Odesa with missiles.

The deal signed by Moscow and Kyiv was hailed as a diplomatic breakthrough that would help curb soaring global food prices by restoring grain shipments from Ukrainian ports to pre-war levels of 5-million tonnes a month.

But Zelensky’s economic adviser said on Sunday the strike on Odesa showed deliveries could still get seriously disrupted. “Yesterday’s strike indicates that it will definitely not work like that,” Oleh Ustenko told Ukranian television.

While Ukraine had the capacity to export 60-million tonnes of grain over the next nine months, this could take up to 24 months if its ports could not function properly, he said.

As the war entered its sixth month on Sunday there was no sign of a let-up in the fighting.

The Ukrainian military reported Russian shelling in the north, south and east, and again referred to Russian operations paving the way for an assault on Bakhmut in the Donbas region in the east.

The air force command said its forces had shot down early on Sunday three Russian Kalibr cruise missiles fired from the Black Sea and aimed at the western Khmelnytskiy region.

While the main theatre of combat has been the Donbas, Zelensky said in a video that Ukrainian forces were moving “step by step” into the occupied eastern Black Sea region of Kherson.

The strikes on Odesa drew condemnation from the UN, EU, the US, Britain, Germany and Italy.

Video released by the Ukrainian military showed firefighters battling a blaze on an unidentified boat moored alongside a tug.  Reuters was unable to independently verify the authenticity of the video or the date it was filmed.

Russian news agencies quoted Russia’s defence ministry as saying that a Ukrainian warship and US supplied anti-ship missiles were destroyed.

“A docked Ukrainian warship and a warehouse with US supplied Harpoon anti-ship missiles were destroyed by long-range precision-guided naval missiles in Odesa seaport on the territory of a ship repair plant,” it said.

On Saturday, Turkey’s defence minister said Russian officials told Ankara that Moscow had “nothing to do” with the strikes.

According to the Ukrainian military, two Kalibr missiles fired from Russian warships hit the area of a pumping station at the port and two others were shot down by air defence forces.

The strikes appeared to violate Friday’s deal, which would allow safe passage in and out of Ukrainian ports.

Along with Western sanctions on Russia, it has stoked food and energy price inflation, driving about 47-million people into “acute hunger”, according to the World Food Programme.

Moscow denies responsibility for the food crisis, blaming the sanctions for slowing its food and fertiliser exports and Ukraine for mining the approaches to its ports.

Ukraine has mined waters near its ports as part of its war defences but under the deal pilots will guide ships along safe channels.

A joint co-ordination centre staffed by members of the four parties to the agreement will monitor ships passing the Black Sea to Turkey’s Bosporus Strait and on to world markets. All sides agreed on Friday there would be no attacks on them.

Russia President Vladimir Putin calls the war a “special military operation” aimed at demilitarising Ukraine and rooting out dangerous nationalists. Kyiv and the West call this a baseless pretext for an aggressive land grab.

Banks are coping with soaring inflation and rising interest rates, a pincer movement that squeezes borrowers, plus the Ukraine conflict
Companies
2 weeks ago

The war in Ukraine will speed up Europe’s shift to renewable energy from fossil fuel, Britain’s climate envoy says, even as it leads to nations ...
National
2 weeks ago

Britain’s spy chief estimates about 15,000 Russian troops have been killed since the February invasion, and ‘winter is coming’
World
2 weeks ago
Next Article

ECONOMIC WEEK AHEAD: Producer price inflation and trade balance to be focal ...

ECONOMIC WEEK AHEAD: Producer price inflation and trade balance to be focal ...