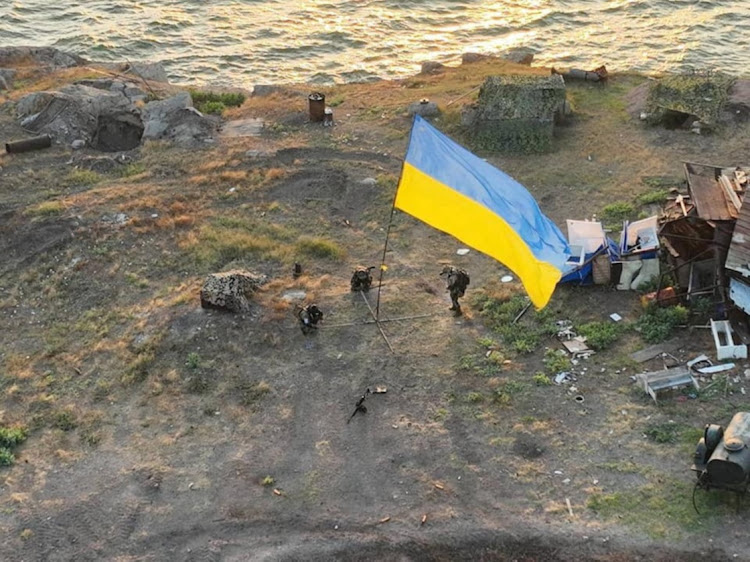 Kyiv — Ukrainian forces raised their national flag on a recaptured Black Sea island on Thursday in a symbol of defiance against Moscow, but Russian forces consolidated gains in eastern Ukraine and probed the defences of potential new targets.

Moscow responded to the flag-raising ceremony fast. It said one of its warplanes had struck Snake Island shortly afterwards and destroyed part of the Ukrainian detachment there.

The tiny island, located 140km south of the Ukrainian port of Odesa, is strategically important as it guards sea lanes. Russia abandoned it at the end of June in what it said was a gesture of goodwill — a victory for Ukraine that Kyiv hoped could loosen Moscow's blockade of Ukrainian ports.

Images released by Ukraine’s interior ministry on Thursday showed three Ukrainian soldiers raising the blue and yellow national flag on a patch of ground on Snake Island next to the remains of a flattened building.

Andriy Yermak, the Ukrainian president’s chief of staff, suggested the moment was one that would be repeated across Ukraine in the coming months. “The flag of Ukraine is on Snake Island. Ahead of us are many more such videos from Ukrainian cities that are currently under temporary occupation,” he wrote on Telegram.

In Moscow, the Russian defence ministry said several Ukrainian troops had landed on the island before dawn and taken pictures with the flag.

“An aircraft of the Russian Aerospace Forces immediately launched a strike with high-precision missiles on Snake Island, as a result of which part of the Ukrainian military personnel was destroyed,” ministry spokesperson Igor Konashenkov said.

Snake Island became a symbol of Ukraine’s refusal to bend to Russia’s will early in the war after Ukrainian forces stationed there delivered a salty riposte when asked by the commander of a Russian ship to surrender.

Russian forces in eastern Ukraine, meanwhile, kept up pressure on Ukrainian troops trying to hold the line along the northern borders of the Donetsk region, in preparation for an anticipated wider new offensive against it.

After taking the city of Lysychansk on Sunday and effectively cementing their total control of Ukraine’s Luhansk region, Moscow has made clear it is planning to capture parts of the neighbouring Donetsk region which it has not yet seized. Kyiv still controls some large cities.

Donetsk regional governor Pavlo Kyrylenko, who has complained of intense Russian shelling in recent days, wrote on Telegram that seven civilians had been killed by Russia in the region over the past 24 hours.

Reuters could not independently verify his assertion and Russia’s defence ministry says it does not target civilians and uses high precision weapons to eliminate military threats.

The general staff of the armed forces of Ukraine said Russian forces were moving more units into the Luhansk region to consolidate Moscow’s control there.

Ukrainian officials said on Wednesday that fighting was under way on the northern border between the Luhansk and Donetsk regions as Russian forces tried to make new inroads. But after Russian President Vladimir Putin said he wanted troops involved in capturing the Luhansk region to rest, a full offensive has yet to materialise.

The US-based Institute for the Study of War said Russia did not appear to have taken any new territory since its capture of Lysychank on Sunday. It assessed that “Russian forces are conducting an operational pause while still engaging in limited ground attacks to set conditions for more significant offensive operations”.

Putin launched his invasion on February 24, calling it a “special military operation”, to demilitarise Ukraine, root out what he said were dangerous nationalists and protect Russian speakers in that country. Ukraine and its allies say Russia launched an imperial-style land grab, starting the biggest conflict in Europe since World War 2.

After failing to seize the capital Kyiv early, Russia is now waging a war of attrition for Ukraine's Donbas region which comprises the Luhansk and Donetsk regions. Russia says it wants to wrest control of the eastern and heavily industrial region on behalf of Moscow-backed separatists in two self-proclaimed people’s republics.

Ukraine has repeatedly pleaded with the West to send more weapons to end a conflict that has killed thousands, displaced millions, and flattened cities. Ukrainian President Volodymyr Zelensky said in his nightly video message that his forces now had some of what they needed.

“At last, Western artillery has started to work powerfully, the weapons we are getting from our partners. And their accuracy is exactly what is needed,” he said.