Advance northwards thwarted, but city of Sloviansk and other civilian areas are being shelled heavily 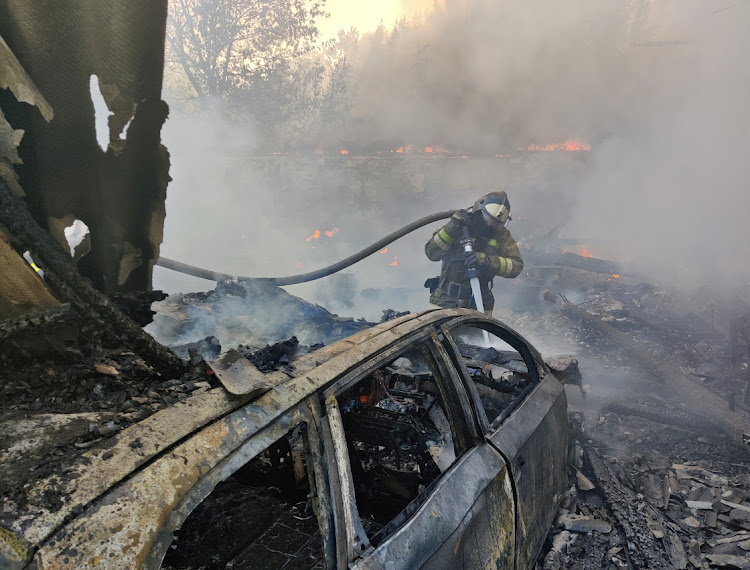 A firefighter works at a warehouse following shelling in Donetsk, Ukraine, on June 6 2022. Picture: ALEXANDER ERMOCHENKO/REUTERS

Ukraine has so far thwarted an attempted Russian advance into the north of its Donetsk region, but the city of Sloviansk and other civilian areas are being  shelled heavily, Ukrainian officials said on Wednesday.

Russia has sharpened its focus on Donetsk, the southern part of which it and its proxies already control, after completing its seizure of the neighbouring Luhansk region on Sunday with the capture of Lysychansk, now in ruins.

Moscow says pushing Ukrainian troops out of both regions is central to what it calls its “special military operation” to ensure its security, a now four-months-long offensive which the West calls an unprovoked war of aggression.

Donetsk and Luhansk comprise the Donbas, the industrialised eastern part of Ukraine that has seen the biggest battle in Europe for generations and which Russia says it wants to control on behalf of Moscow-backed separatists in two self-proclaimed people’s republics.

Ukrainian officials said heavy fighting had been taking place as Russian forces tried to push from Luhansk into Donetsk region and towards the city of Sloviansk.

“We are holding back the enemy on the border of Luhansk region and Donetsk region,” Luhansk governor Serhiy Gaidai said on Ukrainian television.

He said Russian regular army and reserve forces were sent there in an apparent effort to cross the Siverskyi Donets River. Two small settlements just inside Luhansk’s borders were the scene of fierce fighting.

“Luhansk region even now is fighting. Almost all the territory has been captured, but in two settlements fighting is ongoing” he said in a video briefing.

Gaidai and other Ukrainian officials have said Russian artillery forces is pounding targets in the Donetsk region.

Sloviansk mayor Vadym Lyakh said on Wednesday that the city has been shelled for two weeks.

“The situation is tense,” he said, speaking a day after local officials said Russian forces struck a market and a residential area in Sloviansk and killed at least two people. Russia says it does not target civilians.

Lyakh said 17 residents were killed and 67 wounded since President Vladimir Putin sent his troops into Ukraine on February 24. Its population of more than 100,000 before the war shrank to about 23,000 people. More people wanted to leave because of the shelling, he said.

The southern port city of Mykolaiv was also being shelled heavily, mayor Oleksandr Senkevych said in a briefing. Russian forces were assaulting the city with multiple-launch rocket systems. Mykolaiv shed about half of its pre-war population of half a million people, he said.

“There are no safe areas in Mykolaiv,” he said. “I am telling the people of the city that they need to leave.”

Russia’s invasion has killed thousands, displaced millions and flattened cities. It has also raised global energy and food prices and spurred fear of famine in poorer countries as Ukraine and Russia are major grain producers.

A Reuters reporter who visited Lysychansk on Tuesday, once a city of 100,000 people, found many buildings scorched and holed by shells, cars overturned and streets strewn with rubble, showing the ferocity of attacks.

Tatiana Glushenko, a Lysychansk resident, said people were still sheltering in basements and bomb shelters, including children and elderly.

Glushenko said she did not think she would be safe in other parts of Ukraine, so stayed in Lysychansk with her family.

“All of Ukraine is being shelled: western Ukraine, central Ukraine, Dnipro, Kyiv, everywhere. So we decided not to risk our lives and stay here, at home at least,” she said.

Glushenko now hopes peace will return to her ruined city, but for elderly residents Sergei and Evgenia the prospect of rebuilding from the ruins is daunting.

“We have to get out of here somehow,” said Sergei, sitting in a dark shelter with a torch.

“The roof is broken. You have to fix it, but how and how do you pay for it? Winter is coming soon too,” said Evgenia

“They are hunting down pro-Ukraine residents. They are making deals with collaborators, they are identifying apartments where servicemen lived, breaking in and taking clothing,” he said. “Everything is being destroyed.”

Reuters could not immediately verify this report.