Moscow has repeatedly warned both countries against joining Nato 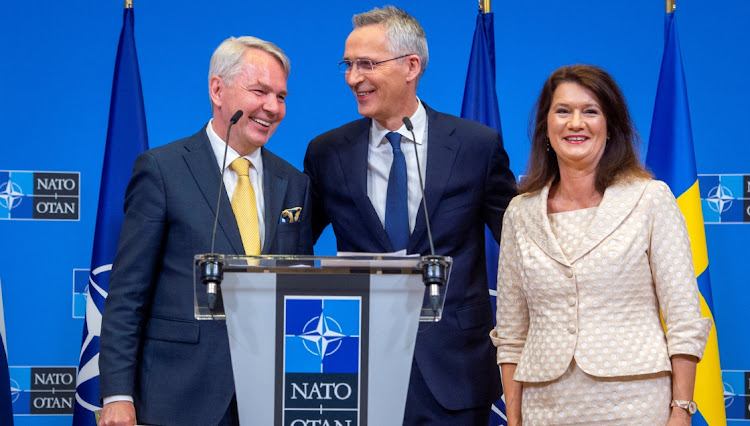 Brussels  — Defence alliance Nato’s 30 allies signed an accession protocol for Finland and Sweden on Tuesday, allowing them to join the nuclear-armed alliance once parliaments ratify the decision, the most significant expansion of the alliance since the 1990s.

The signing at Nato headquarters follows a deal with Turkey at last week’s Nato summit in Madrid, where Ankara lifted its veto on the Nordic membership bids after assurances that both countries would do more to fight terrorism.

“This is truly a historic moment,” Nato secretary-general Jens Stoltenberg said alongside the foreign ministers of the two countries. “With 32 nations around the table, we will be even stronger.”

The protocol means Helsinki and Stockholm can participate in Nato meetings and have greater access to intelligence but will not be protected by the Nato defence clause — that an attack on one ally is an attack against all — until ratification. That is likely to take up to a year.

It was at an allied summit in Madrid in 1997 that Hungary, Poland and the Czech Republic were invited to join, in the first of several waves of Nato’s eastern expansion — seen as an achievement for the West but which has angered Russia.

Moscow has repeatedly warned both countries against joining Nato. On March 12, the Russian foreign ministry said “there will be serious military and political consequences”.

Stoltenberg urged allies to swiftly ratify and assured the two Nordic countries of Nato’s support in the meantime.

“The security of Finland and Sweden is important for our alliance, including during the ratification process,” he said.

“Many allies have already made clear commitments to Finland’s and Sweden’s security, and Nato has increased our presence in the region, including with more exercises.”

Nato’s ambassadors and Stoltenberg stood together for a photo in which the foreign ministers of Sweden and Finland held up their signed protocols, before breaking out into applause.

“Thank you for your support! Now the process of ratification by each of the allies begins,” Swedish foreign minister Ann Linde said on Twitter.

However, Turkey’s President Recep Tayyip Erdogan warned last Thursday at the Nato summit that Finland and Sweden must first keep promises made to Turkey.

After weeks of diplomacy, Erdogan and his Finnish and Swedish counterparts agreed measures to allow the two Nordic countries to overcome a Turkish veto that Ankara imposed in May due to its concerns about terrorism.

According to a signed memorandum, Finland and Sweden pledged not to support the Kurdish militant PKK and YPG groups or the network of US-based cleric Fethullah Gulen, which Ankara labels a terrorist organisation.

STEVEN KUO: Russia is finished as a great power, so SA should realign

Like China, which is subtly stepping away from the Kremlin, Pretoria should redeploy nostalgic comrades
Opinion
1 month ago

Estonia, Latvia and Lithuania have made deep commitments to stand up to Russia’s invasion of fellow former Soviet state
News
1 month ago
Next Article