Some of the heaviest fighting of the war has taken place in the city, where street-by-street combat has raged for a month 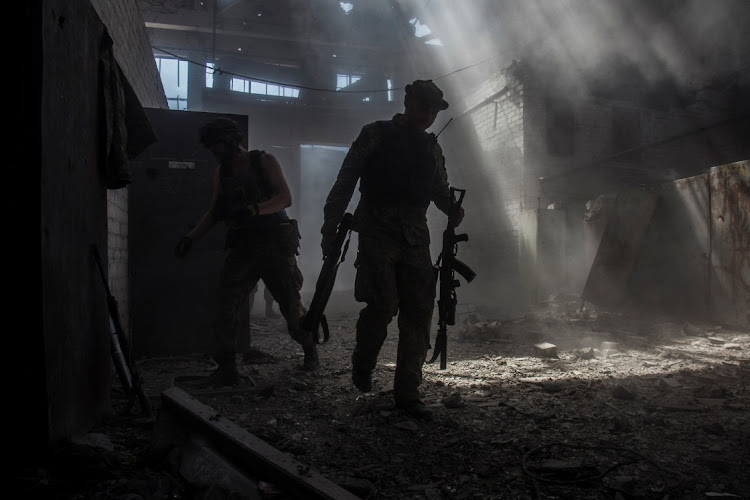 Ukrainian service members walk in the industrial area of the city of Sievierodonetsk, as Russia's attack on Ukraine continues, in this photo on June 20 2022. Picture: REUTERS/OLEKSANDR RATUSHNIAK

Kyiv — Ukraine signalled on Friday its troops were withdrawing from the city of Sievierodonetsk, scene of weeks of heavy fighting, a move that would be a significant setback in its struggle to defeat Russian forces.

Provincial governor Serhiy Gaidai said troops in the city had already received the order to move to new positions, but he did not indicate whether they had already done so or where exactly they were going.

“Remaining in positions smashed to pieces over many months just for the sake of staying there does not make sense,” Gaidai said on Ukrainian television.

The troops will “have to be withdrawn”, he said.

Gaidai was speaking on the day that marked four months since Russian President Vladimir Putin sent tens of thousands of troops over the border, unleashing a conflict that has now killed thousands of combatants and civilians, uprooted several million people, and has seen Ukrainian cities blasted to bits by Russian artillery and air strikes.

The war has also fuelled a global energy and food crisis.

Some of the heaviest fighting of the war has taken place in Sievierodonetsk, where street-by-street combat has raged for a month with Russia painstakingly taking more ground.

The battle is key for Russia to establish control over the last remaining Ukrainian-held sliver of Luhansk province, which along with Donetsk makes up the Donbas region, Ukraine’s industrial heartland.

Sievierodonetsk's fall would leave only Lysychansk — its sister city on the western bank of the Siverskyi Donets River — remaining in Ukrainian hands.

Russia’s tactics since its troops failed to capture the capital Kyiv in the early stages of the war involve ferocious bombardments of cities and towns followed by assaults by ground troops.

Analysts say the Russian forces are taking heavy casualties and face problems in leadership, supplies and morale. Nonetheless, they are grinding down Ukrainian resistance and making incremental gains in the east and south.

Ukraine’s general staff said on Friday the Russians were firing from tanks, mortars, artillery and jets, as well as mounting air strikes near Lysychansk and Sievierodonetsk and nearby towns. Reuters could not immediately verify the reports.

Despite Ukraine’s battlefield difficulties, it has been bolstered by support from the West. On Thursday, European leaders approved Ukraine’s formal candidature to join the EU.

Though the journey to full membership will take years, the move was a boost to Ukrainian morale — and will anger Putin.

Ukrainian President Volodymyr Zelensky told EU leaders in Brussels on Thursday their decision to accept Kyiv’s candidacy was among the most important for Ukraine since it broke from the Soviet Union 31 years ago.

“But this decision is not just being made for the benefit of Ukraine,” he said. “It is the biggest step towards strengthening Europe that could have been made right now...when the Russian war is testing our ability to preserve freedom and unity.”

Moscow launched what it calls its “special military operation” on February 24, saying it wanted to ensure security on its borders. Kyiv and the West say Putin launched an unprovoked invasion to grab Ukrainian territory and bring the country back into Moscow’s fold.

Russian control of the Donbas would allow it to link up with the already occupied Crimea to the south, which Moscow annexed from Ukraine in 2014.

Russian forces were blocking Ukrainian sea communications in the northwest part of the Black Sea and were seeking to resume the offensive in the Mykolaviv area, the general staff said.

A river port and shipbuilding centre just off the Black Sea, Mykolaiv has been a bastion against Russian efforts to push West towards Ukraine’s main port city of Odesa.

The decision to make Ukraine an official candidate, alongside Moldova, hints at a more assertive EU
News
2 days ago

Foreign Minister Luigi Di Maio quits Five Star Movement because of its refusal to back military assistance for Ukraine, though Prime Minister Mario ...
News
4 days ago

African countries who were oppressed should understand what Russia is doing to Ukraine, says Dmytro Kuleba
National
3 days ago
Next Article