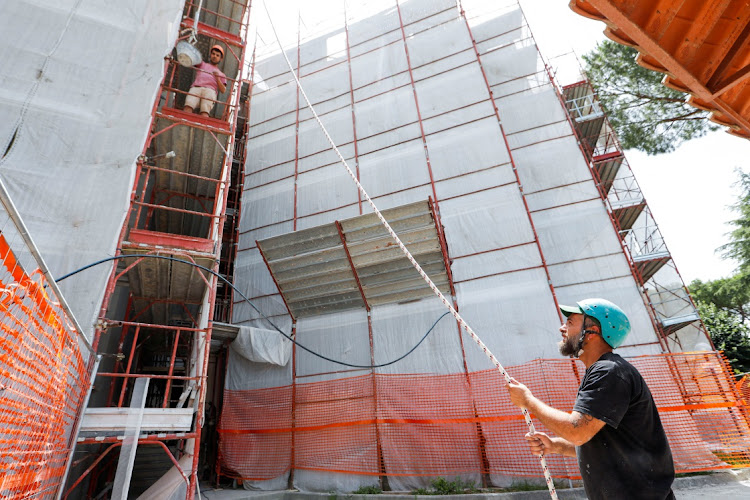 Rome — Innovative incentives for people to “green up” their homes revived Italy’s construction sector last year, boosted its economy and drew international praise. A few months on, it is close to ending in tears.

The complex system of tradable tax credits that supercharged the sector has ground to a halt, as the government clamps down due to suspicions of fraud, leaving builders unpaid for work done.

They and a business lobby group are warning of tens of thousands of bankruptcies and layoffs, which could tip Italy’s weak economy into recession.

Companies that have not been paid for about seven months have in turn stopped paying suppliers and consultants in a domino effect involving thousands of firms and workers.

“We are heading for a disaster, not just for the construction industry but for the whole economy,” says Norbert Toth, whose building firm in the central coastal town of Formia has shed 20 of the 30 workers it had six months ago.

The crisis is already starting to emerge in official data.

Construction output fell in April 2022 for the first time in nine months, building sector confidence in May was the lowest for six months, and the construction purchasing managers’ index was the lowest since January 2021.

Also potentially at risk are some of the €200bn ($210bn) of pandemic recovery funds Rome is due to get from Brussels. One condition for the payout is that Italy almost doubles the energy efficiency of its buildings by 2025 — something that could be in jeopardy without the incentives.

The highly vaunted schemes launched in 2020 have turned into a very Italian story of inventiveness, fraud and bureaucracy.

We are heading for a disaster.

Toth, 39, is co-founder of a group called National Construction Class Action, in which hundreds of small building companies like his own exchange messages and lobby politicians to try to keep the incentives alive.

Some of the firms, desperate for liquidity, are offering to sell tax credits worth tens of thousands of euros at huge discounts of up to 50%.

Under the most generous scheme, known as the “superbonus”, the state paid an eye-watering 110% of the cost of making buildings more energy-efficient, from insulation to solar panels to replacing old-fashioned boilers and window fittings.

It allowed homeowners to deduct the cost of the building work from their taxes over a five-year period, or sell the tax credit to the builder as a form of payment.

The builder could then sell it at a discount to another firm or a bank, which could in turn sell it to another, much like any other financial instrument providing liquidity to the system.

Despite much red tape and frequent tweaks to the rules, the scheme seemed like a roaring success.

In November, the European Commission’s Construction Sector Observatory (ECSO) called the superbonus “a very successful measure” and recommended it be extended to a wider range of buildings.

Other European countries, including Germany, Spain and France offered their own subsidies for green home improvements, though none as generous as Italy’s.

Then late last year, tax police said they had found suspected fraud worth over €2bn linked to green building incentives including, to a small degree, the superbonus.

That rang alarm bells among policymakers and Prime Minister Mario Draghi began sharply criticising the measure, which was introduced by the previous administration and renewed by Draghi.

“We don’t agree with the superbonus,” he told the European parliament last month, in an unusual case of a government criticising one of its own policies.

Draghi said it had not only spawned swindles, but had also driven up costs because clients, knowing they would be reimbursed, had no need to bargain with builders over prices.

Industry minister Giancarlo Giorgetti said it was “drugging the sector and contributing to inflation”.

This is not supported by Eurostat data showing Italian construction cost inflation in the fourth quarter of last year stood at 5.5%, well below the eurozone average of 8.9%.

In an anti-fraud drive, Draghi set limits on the number of times the tax credits could be sold from one bank or firm to another, undermining the mechanism the scheme was based on.

Regulatory uncertainty and ministers’ hostile comments hit confidence and, one by one, the country’s largest banks stopped buying the tax credits from customers and builders, leaving them out of pocket for work done.

A survey of the group’s members this month showed 60,000 firms lack liquidity, because they were unable to sell the tax credits they had accepted as payment for work.

These blocked credits amount to more than €5bn, the CNA estimates. As a result, 50% of the firms are delaying payments to their suppliers, 30% have stopped paying their taxes and 20% are not paying their workers, according to the survey. Almost 50% said they risk having to close their business.

Whether last year’s boom turns into a full-blown bust depends on what is decided in the coming weeks.

With the economy already stagnant, Italy’s alarmed parties have presented numerous proposals to parliament aimed at reviving the superbonus.

These include extending the types of firms to whom banks can sell their tax credits to include small businesses with turnover above £50,000 and allowing banks to use the credits to buy government bonds. It remains to be seen whether such ideas are acceptable to Draghi.

The construction firm owner Toth said industry data over the summer will be “awful” and the only way to save the scheme is to restore the unlimited tradeability of the tax credits, despite acknowledging some firms may have bent the rules.

“Last autumn everything was going so well,” he said. “It’s been truncated in such a brutal way.”

Construction of the R4.6bn office block in Cape Town was halted by a court order in March
National
1 week ago

Hopelessness and despair have plagued the region for generations, but there is now money available for renewal
World
1 year ago
Next Article