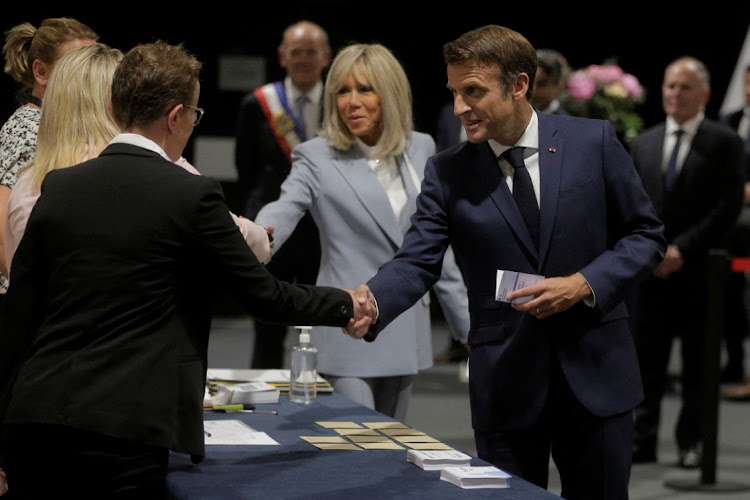 French President Emmanuel Macron and his wife Brigitte Macron arrive to vote during the final round of the country's parliamentary elections, in Le Touquet, France, June 19 2022. Picture: MICHEL SPINGLER/REUTERS

Paris — French President Emmanuel Macron and his allies on Sunday were likely to lose their absolute majority in the National Assembly and with it control of the reform agenda, a crushing outcome for the newly re-elected president.

Macron’s centrist Ensemble alliance were set to end up with the most seats in Sunday’s election, followed by the left-wing Nupes bloc headed by the hard left veteran Jean-Luc Melenchon, projections showed.

But Macron and his allies would fall well short of the absolute majority they would need to control parliament, and ministers and close aides acknowledged that, saying they would now have to reach out to others beyond their alliance to govern the country.

Finance minister Bruno Le Maire called the outcome a “democratic shock” and said they would reach out to all pro-Europeans to help govern the country.

“The rout of the presidential party is complete and there is no clear majority in sight,” Melenchon told cheering supporters.

United behind him, left-wing parties were seen on course to triple their score from the legislative election in 2017, but they failed to secure the outright win Melenchon had hoped for.

If confirmed, a hung parliament would open up a period of political uncertainty that would require a degree of power-sharing among parties not experienced in France in recent decades, or political paralysis and even possibly repeat elections.

Rachida Dati, from the conservative Les Republicains, called the result “a bitter failure” for Macron and said he should name a new prime minister.

There is no set script in France for how things will now unfold as Macron and Ensemble will seek to find a way forward to avoid paralysis.

Macron, 44, became in April the first French president in two decades to win a second term but he presides over a deeply disenchanted and divided country where support for populist parties on the Right and left has surged.

His ability to pursue further reform of the eurozone's second biggest economy would hinge on his ability to rally moderates outside his alliance on the Right and left behind his legislative agenda.

In another significant change for French politics, Le Pen’s party could score a tenfold increase of its MPs, and win as much as close to 100 seats, the initial projections showed — its biggest number on record.

The Les Republicains party and its allies could also get as much as 100, potentially making them kingmakers, as their platform is more compatible with Macron’s than any other group.

If official results, that have started trickling in, confirm Macron and his allies missed an absolute majority by a wide margin, they might either seek an alliance with Les Republicains or run a minority government that will have to negotiate laws with other parties on a case-by-case basis.

Macron had appealed for a strong mandate during a campaign held against the backdrop of a war on Europe's eastern fringe that has curbed food and energy supplies and sent inflation soaring, eroding household budgets.

“Nothing would be worse than adding French disorder to the world's disorder,” the president had said ahead of the second-round vote.

French diplomats to strike for first time in 20 years

French diplomats to strike for first time in 20 years