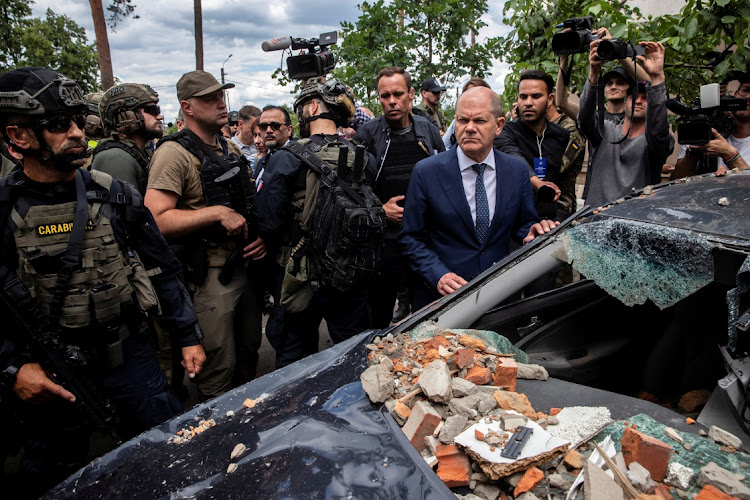 Kyiv — The leaders of Germany, France and Italy — all criticised by Kyiv in the past for support seen as too cautious — made a joint visit to Ukraine on Thursday, touring a town devastated by Russia’s invasion.

“It’s an important moment. It’s a message of unity we’re sending to the Ukrainians,” French President Emmanuel Macron said after pulling into Kyiv on an overnight train along with Germany’s Olaf Scholz and Italy’s Mario Draghi. They were joined by Romanian President Klaus Iohannis.

Air raid sirens blared as the visit got under way. They toured the ruins of Irpin, a Kyiv suburb devastated by fighting early in the war, when Russian forces left bodies of civilians littering the streets as they withdrew.

Noting graffiti on a wall that read “Make Europe, not war”, Macron said: “It’s very moving to see that. This is the right message.”

The visit took weeks to organise, while the three most powerful EU leaders all fended off criticism over positions described as too deferential to Russian President Vladimir Putin. Britain’s Boris Johnson visited Kyiv more than two months ago. 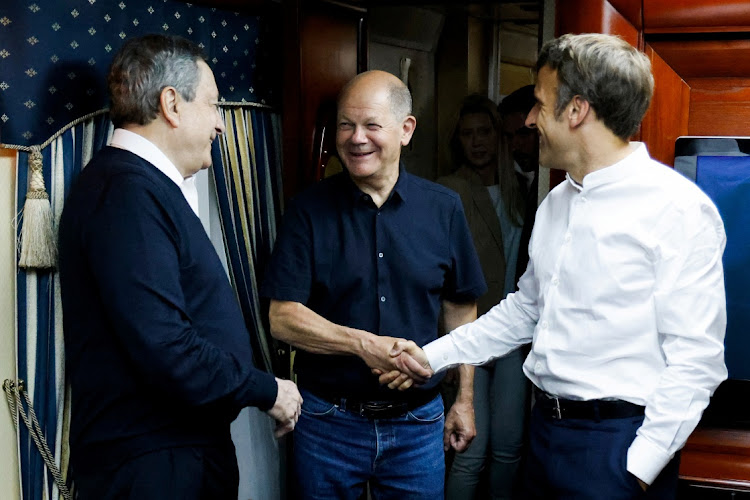 French President Emmanuel Macron shakes hands with German Chancellor Olaf Scholz next to Italian Prime Minister Mario Draghi as they travel on board a train bound to Kyiv after departing from Poland, June 16 2022. Picture: LUDOVIC MARIN/REUTERS

Still, the decision by the three to travel together held strong symbolism at a pivotal moment — a day before the EU’s executive commission is expected to recommend pushing forward with Ukraine’s bid to join the bloc, which EU leaders are expected to endorse at a summit next week.

Nato defence ministers were also meeting in Brussels and were expected to announce more promises of additional weapons for Kyiv. US President Joe Biden pledged $1bn worth of new aid on Wednesday, including anti-ship rocket systems, artillery rockets and rounds for howitzers.

“Every day, I struggle for Ukraine to get the weapons and equipment it needs,” President Volodymyr Zelensky said in his nightly video address to the nation.

Ukraine applied to join the EU just four days after Russia invaded in February, and another four days later Moldova and Georgia applied too.

“As of today we are already so much closer to obtaining this status than we could have dreamed even a few years ago. Ukraine has done everything possible to become a candidate,” Zelensky said.

Scholz, Macron and Draghi all say they are strong supporters of Ukraine, and have taken big practical steps to reduce Europe’s dependence on Russian energy and find weapons to help Kyiv.

But Ukraine has long criticised Scholz over what it regards as Germany’s slow delivery of weapons and reluctance to sever economic ties with Moscow, and was furious in June at Macron for saying in an interview that Russia must not be “humiliated”.

Italy has also proposed a peace plan, which Ukrainians fear could lead to pressure on them to give up territory.

“They will say that we need to end the war that is causing food problems and economic problems ... that we need to save Mr Putin’s face,” Oleksiy Arestovych, an adviser to Zelensky, told German newspaper Bild before the visit.

Germany’s defence minister said three multiple rocket launchers it has promised Kyiv could be delivered in July or August, once Ukrainians are trained to use them.

Kyiv says it urgently needs more weapons, especially artillery and rockets, to counter Russia’s firepower advantage. Kyiv is taking hundreds of casualties a day as the war has entered a brutal attritional phase in the east.

After Moscow launched its “special military operation” claiming its aim was to disarm and “denazify” its neighbour, Ukraine repelled an armoured assault on Kyiv in March.

Since then, however, Russia has shifted both its aims and its tactics, now trying to fortify territory it occupies in the east and south, and to seize more with slow advances behind massive artillery bombardments.

The main battle in recent weeks has been over the eastern city of Sievierodonetsk. On Wednesday Ukrainian forces holed up in a chemical factory with hundreds of civilians ignored a Russian order to surrender.

All remaining bridges linking the city with Ukrainian-held territory on the opposite bank of the Siverskyi Donets river were destroyed in recent days, but Ukrainian officials say the garrison is not completely cut off.

Ukraine still holds a pocket of territory in the wider, eastern Donbas region, which Russia has vowed to capture on behalf of its separatist proxies. Most of it is on the opposite side of the river, which Russian troops have struggled to cross.

In the south Ukrainian forces have been making slow inroads into Kherson province, the largest swath of territory Russia still holds from the areas it has captured since the invasion.

More than 500 civilians are said to be trapped inside a chemical factory in Sievierodonetsk, scene of some of the most intense fighting in the war ...
World
1 week ago

From blocked export routes to mined wheat fields and a lack of storage space, Ukraine will be out of the grain export market for a long time.
World
1 week ago

A Moscow court fined the Wikimedia Foundation $88,000 for refusing to remove what it termed disinformation from Russian-language Wikipedia articles ...
World
1 week ago
Next Article