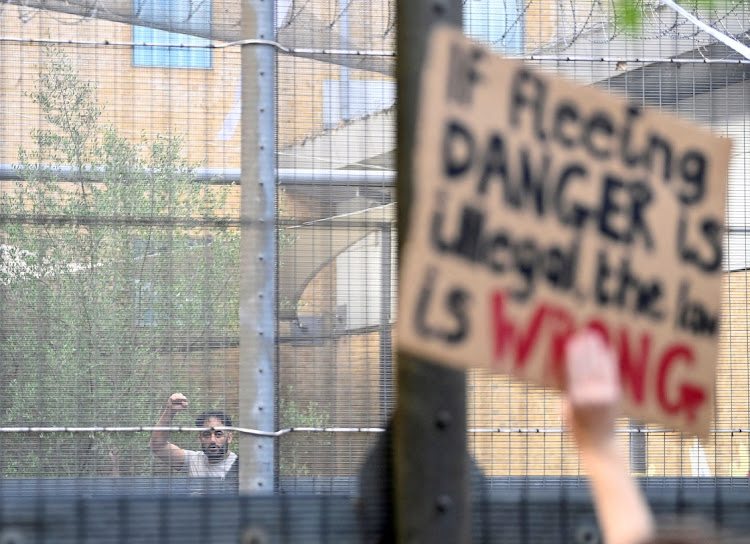 A detainee inside Brook House Immigration Removal Centre gestures as demonstrators protest against a planned deportation of asylum seekers from Britain to Rwanda, at Gatwick Airport near Crawley, Britain, June 12 2022. Picture: TOBY MELVILLE/REUTERS

London  — The Court of Appeal in London has refused to grant an injunction to block Britain from sending its first flight of asylum seekers to Rwanda, a plan the UN' refugee chief described as “catastrophic”

Britain has agreed to a deal with Rwanda to send some asylum seekers to Rwanda in return for an initial payment of £120m and additional sums based on the number of people deported.

The government has not provided details of those selected for deportation but charities say they include people fleeing Afghanistan and Syria.

Amid legal challenges, the number of people scheduled to leave on Tuesday's plane has fallen to less than a dozen. However, a High Court judge on Friday refused to grant a temporary injunction to block the flight, and on Monday three justices on the Court of Appeal upheld that decision.

Judge Rabinder Singh said they could not interfere with the original “clear and detailed” judgment, and refused permission for further appeal. A full hearing to determine the legality of the policy as a whole is due in July.

The government says the deportation strategy will undermine people-smuggling networks and stem the flow of migrants risking their lives by crossing the English Channel in small boats from Europe.

Human rights group say the policy is inhumane and will put migrants at risk. The UN High Commissioner For Refugees has said Rwanda, whose own human rights record is under scrutiny, does not have the capacity to process the claims, and there was a risk some migrants could be returned to countries from which they had fled.

“We believe that this is all wrong ... for so many different reasons,” UNHCR Filippo Grandi told reporters. “The precedent that this creates is catastrophic for a concept that needs to be shared like asylum.”

Initially, about 37 individuals were scheduled to be removed on the first flight to Rwanda, but the charity Care4Calais said that number has dwindled in the face of legal challenges to just eight.

Earlier, Prime Minister Boris Johnson said the government was determined to press ahead with the policy despite the legal challenges and opposition, reportedly including from Prince Charles, the heir to the British throne.

“It’s very important that the criminal gangs who are putting people’s lives at risk in the Channel understand that their business model is going to be broken and is being broken by this government,” Johnson told LBC radio. “They are selling people false hope and luring them into something that is extremely risky and criminal.”

The government said the deportation plan would deter the Channel crossings, though more than 3,500 people have reached Britain in small boats since the middle of April when the Rwanda scheme was unveiled, according to government figures

As the court hearings were taking place about 35 migrants arrived in Dover, some carrying their possessions in black bags, where they were taken away by British border forces.

The high court is separately hearing arguments from Asylum Aid, a refugee charity, which launched a second legal challenge to stop the government flying refugees to Rwanda.

Charlotte Kilroy, a lawyer representing Asylum Aid, said asylum seekers were not given enough time to challenge their deportation, meaning there was a high risk of unlawful and unsafe decisions.

This case is being heard by Jonathan Swift, the same judge who on Friday rejected granting an injunction.