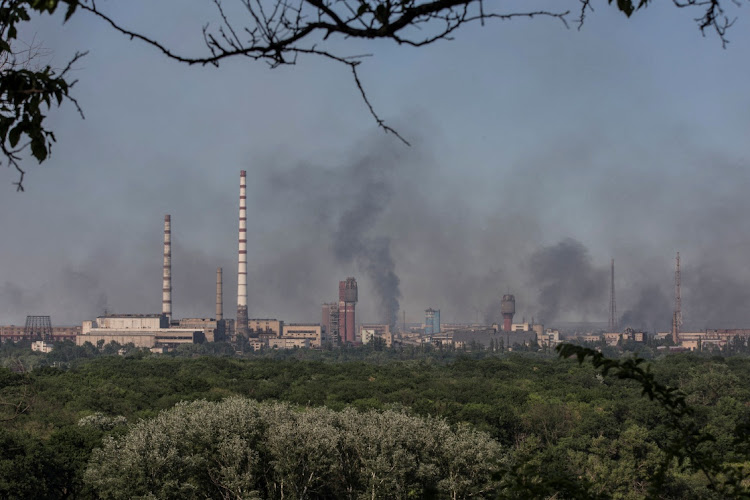 Smoke rises after a military strike on a compound of Sievierodonetsk's Azot Chemical Plant, amid Russia's attack on Ukraine, in the town of Lysychansk, Luhansk region, Ukraine on June 10 2022. Picture: REUTERS/OLEKSANDR RATUSHNIAK

Kyiv — Russian forces swarmed into the eastern Ukrainian city of Sievierodonetsk and pounded a zone where hundreds of civilians were sheltering, a Ukrainian official said on Monday — a scene that mirrored Moscow’s brutal assault on Mariupol last month.

Pro-Moscow separatists claimed the last bridge out of Sievierodonetsk had been destroyed and Ukrainian defenders there must now surrender or die. Ukraine said there was still another way out though it was severely damaged.

Ukraine has issued increasingly urgent calls for more Western weapons to help defend Sievierodonetsk, which Kyiv says could hold the key to the outcome of the battle for control of the eastern Donbas region and the future course of the war.

“The battles are so fierce that fighting for not just a street but for a single high-rise building can last for days,” he said on social media.

Russian forces now controlled about 70% of Sievierodonetsk, he said, and were destroying it “quarter by quarter” in one of the bloodiest assaults since they launched their invasion on February 24.

“Russians continue to storm the city, having a significant advantage in artillery they have somewhat pushed back the Ukrainian soldiers,” Gaidai, who is governor of the Luhansk region that includes Sievierodonetsk, said on Monday.

Russian artillery fire pummelled the Azot chemical plant, where hundred of civilians were sheltering, he said.

“About 500 civilians remain on the grounds of the Azot plant in Sievierodonetsk, 40 of them are children. Sometimes the military manages to evacuate someone,” he said, noting the lack of a ceasefire agreement or agreement on evacuation corridors.

Gaidai said the twin city of Lysychansk across the Siverskyi Donets river to the west was also being shelled by Russian forces, and a six-year-old child had been killed there.

Russia’s RIA news agency quoted a pro-Moscow separatist spokesperson, Eduard Basurin, as saying the last bridge over the river linking the two cities had been destroyed on Sunday. Ukrainian troops were effectively blockaded in Sievierodonetsk and should surrender or die, Basurin said.

Gaidai also said one crossing was destroyed on Sunday, but there was still another “half destroyed” bridge remaining, though it could not be used for heavy vehicles.

“If after new shelling the bridge collapses, the city will truly be cut off. There will be no way of leaving Sievierodonetsk in a vehicle.”

As Mariupol fell to Russia last month, hundreds of civilians and badly wounded Ukrainian soldiers were evacuated after being trapped for weeks in the Azovstal steelworks there.

Ukrainian officials have expressed concern about the fate of troops who surrendered after many were taken to Russia, and say cholera is spreading among remaining residents due to bodies left buried in rubble from destroyed residential buildings.

Ukrainian President Volodymyr Zelensky said in his nightly video address on Sunday that severe fighting was ongoing in the Donbas, “literally for every metre”.

Attacks that resulted in child casualties had created a lasting image of Russia for the rest of the world.

Putin launched what he called a “special operation” to restore Russian security and “denazify” its neighbour. Ukraine and its Western allies call this a baseless pretext for an invasion which has raised fears of wider conflict in Europe.

More than five million people have fled Ukraine, thousands have died and cities have been reduced to rubble in an assault that has sparked a global energy and food crisis by disrupting gas, oil and grain supplies from Russia and Ukraine.

After failing to take the capital Kyiv, Moscow turned its attention to expanding control in the Donbas, where pro-Russian separatists have held territory since 2014.

“Our boys are holding on but the conditions are tough,” he said. Vlasenko said the city had been without communications and normal services for a month.

In Pokrovsk, southwest of Sievierodonetsk, women, children and elderly, some in wheelchairs, boarded the only train evacuating people on Saturday from the conflict zone to relative safety in faraway Lviv, near the border with Poland.

“We held on until the last moment, we didn’t want to leave, but life has forced us to survive,” Lyuba, a woman from Lysychansk, told Reuters Television as she waited for the train to depart. “We are leaving, we don’t know where, to whom, but we are leaving.”

Ukrainian presidential adviser Mykhailo Podolyak issued the latest appeal for more weaponry, boiling it down into a list of equipment he said was needed for heavy weapons parity, including 1,000 howitzers, 500 tanks and 1,000 drones.

“We are waiting for a decision,” he said, adding that Western defence ministers would meet on Wednesday in Brussels.

Russia issued the latest of several recent reports saying it had destroyed US and European arms and equipment, hoping to send the message that delivering more would be futile.

Russia’s defence ministry said high-precision air-based missiles had struck near the railway station in Udachne northwest of Donetsk, hitting equipment that had been delivered to Ukrainian forces. There was no immediate word from the Ukrainian side.

Moscow has criticised the US and other nations for sending Ukraine weapons, threatening to strike new targets if the West supplied long-range missiles.

Alexei Navalny, is in Ukraine to see the impact of Moscow’s invasion and to report a true picture back to Russians
World
3 weeks ago
Next Article