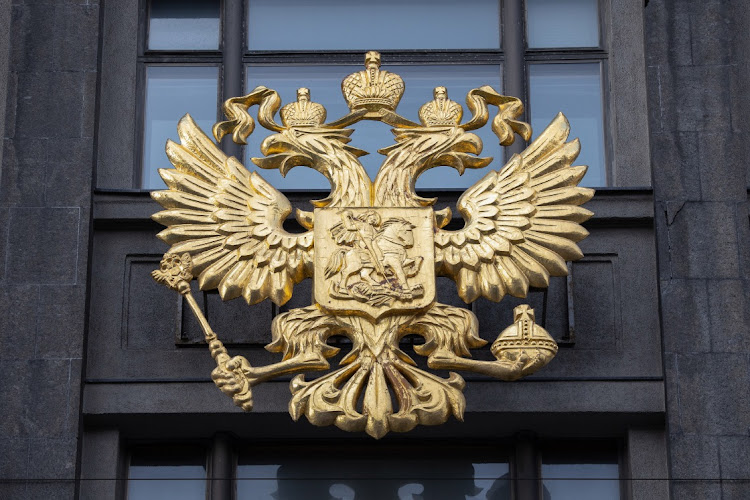 The coat of arms of the Russian Federation is shown on the front of the Duma building in Moscow, Russia, February 22 2022. Picture: BLOOMBERG/ANDREY RUDAKOV

London — Russia’s parliament on Tuesday passed a pair of bills ending the European Court of Human Rights’ (ECHR’s) jurisdiction in the country, a rupture provoked by Russia’s war in Ukraine.

The break removes a legal avenue that Russians, including jailed Kremlin critic Alexei Navalny, have used in the past to raise high-profile cases that had been rejected by national courts.

Parliament’s lower house, the Duma, approved two bills — one removing the country from the court’s jurisdiction and a second setting March 15 as the cut-off point, with rulings against Russia made after that date not to be implemented.

The bills were passed nearly unanimously, with only one deputy from the opposition Communist Party voting against. They must now be signed by President Vladimir Putin before becoming law.

In 2017, the court ordered Moscow to pay compensation to survivors of a hostage crisis who alleged failings on the part of the security services when they stormed a school seized by Islamist militants in 2004. The siege in the town of Beslan ended in a bloody gun battle in which more than 330 hostages died, including at least 180 children.

In February 2021, the ECHR ruled that Navalny, the country’s leading opposition figure, should be released from prison after being jailed on charges he described as politically motivated. Russia described the ECHR’s ruling as “unlawful”.

Russia was admitted to the Council of Europe, which was founded after World War 2 to promote human rights and democracy in Europe, under former president Boris Yeltsin in 1996. After the 2014 annexation of Crimea, Russia was stripped of its voting rights in the council’s parliamentary assembly, which it began to boycott from 2016.

On March 15, the committee of ministers of the Council of Europe decided to expel Russia from the organisation, of which the ECHR is part, in response to Russia’s deployment of troops to Ukraine in February.

Ukraine said the strike hit a rail car repair works, while Moscow said it has destroyed tanks
World
3 weeks ago

Western deliveries of longer-range arms to Kyiv would make Russia push Ukrainian forces further back from its borders, it says
World
3 weeks ago