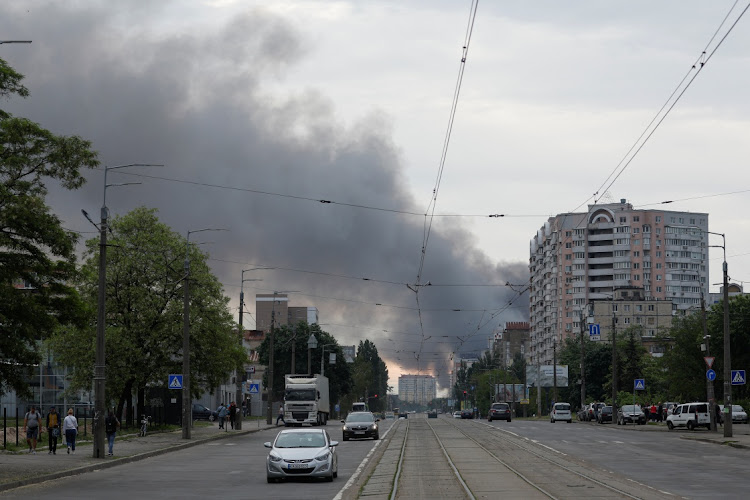 Kyiv — Russia struck Ukraine’s capital, Kyiv, with missiles early on Sunday for the first time in more than a month, while Ukrainian officials said a counterattack on the main battlefield in the east had retaken half of the city of Sievierodonetsk.

Dark smoke could be seen after the attack on two outlying districts of Kyiv. Moscow said it had hit a repair shop housing tanks sent from Eastern Europe.

Ukraine said Russia had carried out the strike using long-range air-launched missiles fired from heavy bombers as far away as the Caspian Sea — a weapon far more valuable than the tanks Russia claimed to have hit.

At least one person was admitted to hospital but there were no immediate reports of deaths from the strike, a sudden reminder of war in a capital where normal life has largely returned since Russian forces were driven from its outskirts in March.

“The Kremlin resorts to new insidious attacks. The missile strikes at Kyiv have only one goal — kill as many as possible,” Ukrainian presidential adviser Mikhailo Podolyak wrote in a tweet.

The attack was the first big strike on Kyiv since late April, when a missile killed a journalist. Recent weeks have seen Russia focus its destructive might mainly on front lines in the east and south, though Moscow occasionally strikes elsewhere in what it calls a campaign to degrade Ukraine’s military infrastructure and block Western arms shipments.

Russia has concentrated its forces in recent weeks on the small eastern factory city of Sievierodonetsk, launching one of the biggest ground battles of the war in a bid to capture one of two eastern provinces it claims on behalf of separatist proxies.

After retreating steadily in the city in recent days, Ukraine mounted a counterattack there, which it says took the Russians by surprise. After recapturing a swathe of the city, Ukrainian forces were now in control of half of it and continuing to push the Russians back, said Serhiy Gaidai, governor of the Luhansk region that includes Sievierodonetsk.

“It had been a difficult situation, the Russians controlled 70% of the city, but over the past two days they have been pushed back,” Gaidai said on Ukrainian television. “The city is now, more or less, divided in half.”

The claims could not be independently verified. Both sides say they have inflicted huge casualties in Sievierodonetsk, a battle that could determine which side carries the momentum into a protracted war of attrition in coming months.

Britain’s defence ministry said on Sunday that Ukrainian counterattacks there over the past 24 hours were likely to blunt any operational momentum that Russian forces had previously gained. Russia was deploying poorly equipped separatist fighters in the city to limit the risk to its regular forces, it said.

Moscow said its own forces were making gains in the city. Ukraine’s army said Russian forces continued to mount assault operations with the aid of artillery and controlled the eastern part of Sievierodonetsk.

“The situation is tense, complicated,” mayor Oleksandr Stryuk told national television on Saturday, saying there was a shortage of food, fuel and medicine. “Our military is doing everything it can to drive the enemy out of the city.”

In neighbouring Donetsk province, which Moscow also claims on behalf of its separatist proxies, Russian forces have been advancing in territory north of the Siverskiy Donets river, in advance of what Ukraine anticipates would be a push on the big city of Sloviansk.

Ukrainian officials said at least eight people were killed and 11 injured in Russian shelling in the province overnight.

In an interview with Russian state television, President Vladimir Putin said Moscow would hit new targets if the West supplies longer-range missiles to Ukraine. But he also dismissed the impact of advanced rocket systems promised by Washington to Ukraine last week, saying these would not affect the course of fighting.

The US is training Ukrainian troops on its HIMARS rocket launchers, which would be able to hit positions far behind Russian lines. Kyiv says such weapons will help it shift the war's momentum.

Putin, in excerpts of his interview quoted by Russian news agencies ahead of broadcast, said that if the West supplies longer-range missiles “we will strike at those targets which we have not yet been hitting”, without specifying the targets.

Russian forces had been hitting Ukrainian weapons systems and “cracking them like nuts”, he said, dismissing the new US rockets as “meant to make up for the losses of this military equipment” and not likely to change the battlefield balance.

Kyiv sharply rebuked French President Emmanuel Macron on Saturday for saying it was important not to “humiliate” Moscow, and to allow the Kremlin an “exit ramp” in future peace talks.

Ukraine has bristled over what it considers pressure from European allies to relinquish territory to secure a ceasefire, which Kyiv says would let Moscow solidify its grip on occupied areas and regroup for future attacks.

“Calls to avoid humiliation of Russia can only humiliate France and every other country that would call for it,” Ukrainian foreign minister Dmytro Kuleba tweeted in response to Macron’s remarks. “Because it is Russia that humiliates itself. We all better focus on how to put Russia in its place. This will bring peace and save lives.”

In an overnight address, Ukrainian President Volodymyr Zelensky said only Putin could give the order to stop the war: “The fact that there is still no such order is obviously a humiliation for the whole world.”

Donetsk governor asks for weapons to keep Russian troops out