Poles reach out to Ukrainian refugees despite huge financial cost 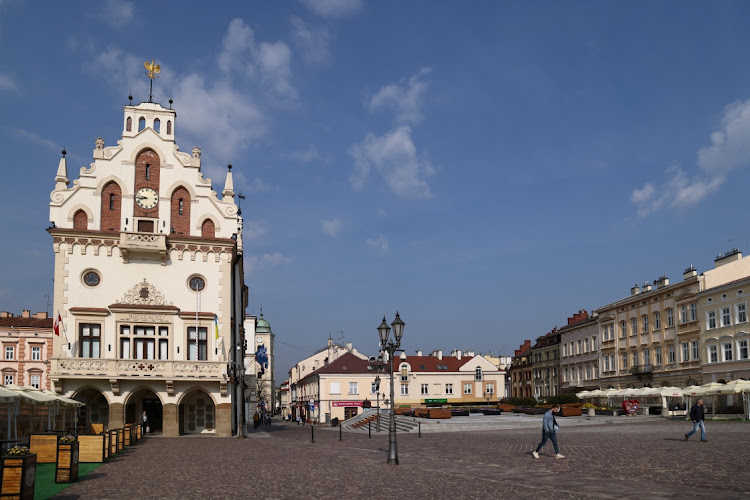 The old market place with the town hall in Rzeszow, Poland, on April 29 2022. Picture: REUTERS/JAKUB STEZYCKI

Rzeszow — When Ukrainians started streaming across the border after Russia invaded their country on February 24, residents in this Polish city — like many others across central Europe — sprang into action to help settle and house refugees.

Three months later Rzeszow’s population of almost 200,000 has swelled, at times by as much as 50%, and mayor Konrad Fijolek predicts the city will need new schools and housing to absorb refugees unable or unwilling to return home.

The pressures on his city illustrate the challenges facing central European nations as they shift to providing long-term assistance to refugees, who are mostly women and children.

“If we built a few thousand more flats here, they would definitely be occupied, even by those people who want to escape here and wait out the war but probably a large part of them will stay here more permanently,” Fijolek said.

“There’s not a single vacant place. We would really need and we will try to build more flats and there is a huge integration process ahead of us.”

Rzeszow, which lies on the River Wislok about 100km from the Ukraine border, has a well-preserved Old Town and is home to a number of universities. It’s also a growing regional tourist and investment hub.

Central European nations such as Poland, which had large Ukrainian communities before the war, have been a natural destination for many refugees, putting pressure on some local services and residents in a region already hit by sharp cost of living increases.

“We understand that Poland is probably also having a hard time because of this,” said Svetlana Zvgorodniuk, who left the western city of Lviv on February 27 with her daughter and granddaughter. “It’s difficult for the state to provide for so many people. We are very grateful.”

More than 6-million Ukrainians have fled their country, escaping a Russian invasion that has flattened cities, killed thousands and created Europe’s biggest refugee crisis since the end of World War 2.

‘I won’t chase them away’

Much of the burden of absorbing the refugees has fallen on Poland, where 1.1-million Ukrainians have registered for a national identification number, according to government data. That umber includes 519,000 children and means Ukrainians now comprise 7% of the children living in Poland.

At the Hotel Zacisze just outside Rzeszow, owner Krzystof Ciszewski has paid out of pocket to house refugees at the popular summer wedding venue and is still waiting for government compensation.

Now he worries about freeing up rooms to honour bookings from locals made well before the war started.

“We agreed immediately that ... we would accept anyone who wanted to stay here for an unspecified period of time,” Ciszewski said. “Somehow we have continued to provide for the refugees but for how long I am not sure. I won’t chase them away.”

The Polish minister in charge of the refugee crisis, Pawel Szefernaker, acknowledged there were problems and said he would follow up on the situation in Rzeszow.

The government has so far sent 1.3bn zlotys ($297m) to local communities to help defray costs of housing refugees. The government has also formed a team to co-ordinate efforts to help refugees in areas including education, health care, jobs and social policy, he said.

Fijolek said many families have told him they haven’t received compensation yet despite accommodating refugees for months.

“While numerically, there are more refugees in Warsaw or Wroclaw, the scale of population growth in Rzeszow is the highest.”

From towns such as Rzeszow to bigger cities in the region such as Warsaw or the Czech capital Prague, Cyrillic writing at public offices and job-seeking adverts on social media signal a growing Ukrainian presence in the region.

In the Czech Republic, a summer crunch looms because mountain and tourist areas that have taken in a large number of refugees need space for the holiday season starting in June.

“The difficulty is a lot of them are concentrated along the borders and areas outside larger towns such as in mountain areas where there is not enough social infrastructure, there are not enough schools, there are not enough quality jobs and health care,” said Jakub Anderle, the migration co-ordinator of People in Need, Prague-based non-profit organisation. “That is the biggest challenge.”

At the Resort Eden in the Krkonose mountains straddling the Polish border, manager Jiri Licek said the hotel has paid for lodging, food and a social worker, with some local donations.

And with nowhere to relocate the Ukrainians, many who have lived at the hotel since the start of the war, Licek is looking at a lost summer season after a number of Czech school camps cancelled bookings due to uncertainty about availability.

“I don’t believe anyone will give us compensation,” Licek said. “We finance everything from our own resources.”