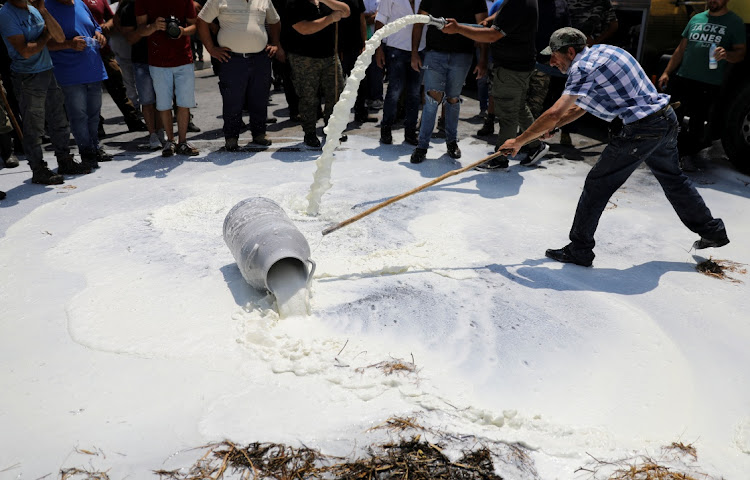 Sheep and goat farmers dump milk during a protest over high prices and production issues related to Halloumi cheese outside the presidential palace in Nicosia, Cyprus, May 18 2022. Picture: YIANNIS KOURTOGLOU/REUTERS

Nicosia — Cypriot farmers dumped tonnes of milk and set bales  of hay on fire outside the presidential palace in the capital Nicosia on Wednesday, in protest at high prices and production issues.

Goat and sheep farmers say noncompliance with regulations on the production of halloumi cheese has left them with a glut of milk that they are unable to sell or use. High prices for animal feed have added to the problems, they say.

Halloumi is traditionally made with goat and sheep milk and is listed as such with a Protected Designation Origin (PDO) status from the EU. But increasingly, cheesemakers have used more cows’ milk, considered more palatable for export markets.

The soft rubbery cheese, a prized Cypriot export, was given its PDO status in 2021. It means halloumi cannot be produced and marketed by that name in any other country.

About 300 farmers, some driving milk tankers, arrived in a convoy at the gated compound in the centre of the city where they poured milk onto the tarmac and set fire to hay placed outside the main entrance.

A representative of the Cypriot presidency said farmers would receive compensation by the end of May.