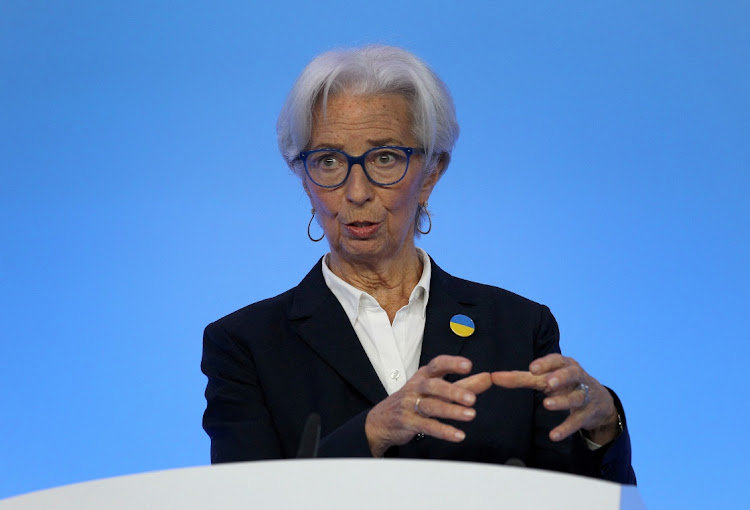 President of the ECB Christine Lagarde wants more time for discussion between the board members and policymakers representing the bank's 19 member countries.

Frankfurt — European Central Bank (ECB) President Christine Lagarde has given national central bank chiefs a bigger say in policy meetings, asking her own board to speak less and set aside more time for debate, sources familiar with the process said.

Lagarde has told chief economist Philip Lane and fellow board member Isabel Schnabel to limit their presentations and leave more space for the central bank chiefs of the ECB's 19 countries to air their views, six sources told Reuters.

Marshalling consensus among different countries has always been a tricky task for the Frankfurt-based central bank and complaints about the structure of the meetings, where a few voices typically dominate, predate Lagarde's tenure.

Such criticism has grown since last summer as Lane and his staff repeatedly underestimated the size and duration of inflationary pressures. The surge in prices, which some ECB policymakers warned were persistent, eventually prompted the bank to change tack and open the door to higher interest rates this year.

Lagarde has now decided to limit board-member presentations to 20 pages and told staff to wrap up seminars by lunchtime on the first day of the ECB’s policy meeting, the sources said.

On top of that, the two-day policy meeting now starts on Wednesday morning rather than the afternoon and the Thursday session begins 30 minutes earlier than previously, all with the aim of leaving more space for debate, the sources said.

The changes, which have not previously been reported, were already in use at the April 14 2022 meeting.

“We are now providing more comprehensive analysis in supporting documents prior to the meeting, so that presentations can be more concise to avoid repetition,” an ECB spokesperson said. “By starting meetings earlier, the Governing Council has given itself more time to reach a shared assessment of the economic outlook and take collective monetary policy decisions.”

As the person who oversees economic forecasts and the author of policy recommendations at the ECB, Lane's presentations and proposals are the centrepiece of its policy meetings, which include an informal dinner on the Wednesday evening attended by the national bank chiefs and the six ECB board members.

Before the changes where introduced, some of Lane's presentations ran to over 60 pages, three of the sources said, leaving little time for discussion.

Though the new directive also applies to Schnabel, the other board member who addresses the meeting and who is head of the ECB's market operations, her presentations on financing conditions tend to be relatively short, three sources said.

Lane, who had inherited the meeting structure from his predecessor under Mario Draghi's presidency, has recently been sending briefing materials to governors ahead of meetings, freeing time for others to speak.

Inflation in the eurozone is now nearly four times the ECB's target and may not fall back below 2% for years, according to a host of public- and private-sector projections.

Some policymakers had publicly warned that price surges could be bigger and more durable than the ECB predicted and disputed Lane's view that the record jump would ease without tougher action. Some policymakers said privately they felt the contrasting views were given short shrift by Lane.

Lane and all other ECB policymakers who have spoken in public have now recognised that high inflation is here to stay at least until next year and rate hikes are likely needed.

In what one source saw as a possible change of approach at the April policy meeting, Lagarde called on Bundesbank chief Joachim Nagel in the early exchanges of the debate, even though Nagel had not yet appeared to ask to speak.

Nagel, who started on the job in January 2022, has repeatedly called on the ECB to curb stimulus and raise rates several times this year as high inflation, now at 7.5%, was at risk of getting entrenched.

“Lagarde said ‘I think Joachim wanted to say something,’” one of the sources said.

The ECB has acknowledged errors in its inflation projections, but has noted that other forecasters looking at the eurozone were similarly wrong and errors in “conditioning assumptions”, particularly for energy prices, accounted for three-quarters of the mistake.

Other central banks including the US Federal Reserve and the Bank of England have also failed to predict the recent price surge, which has been stoked by successive waves of the coronavirus pandemic and Russia's invasion of Ukraine. However, both were quicker to admit that inflation is not as transitory as once hoped.

The errors in the ECB's forecasts forced the bank into an unprecedented policy pivot, with Lagarde first saying that a rate hike this year is highly unlikely, then just months later cementing expectations for a move around midyear.

Frustration that the bank had to switch gears so abruptly as well as at the format of debate at policy meetings have prompted some policymakers to leak details of the policy meetings, the sources said.

“Christine [Lagarde] is really annoyed by the leaks and this is another step in trying to stop them,” one of the sources said.

When she took office in late 2019, Lagarde pledged to make the policymaking process more inclusive after the fractious final months of Draghi's presidency — when a number of policymakers vocally opposed policy decisions.

Her move to restructure meetings is seen as part of this commitment.

Shortening presentations in favour of discussion brings the ECB closer in line with the practices of other central banks, including the Fed.

While the Fed and BoE are well under way with policy tightening, the ECB hasn’t raised borrowing costs since 2011
News
1 month ago