Thousands of civilians have been killed, towns and cities blasted into ruins, and more than 6-million people have fled their homes since the start of the war in February 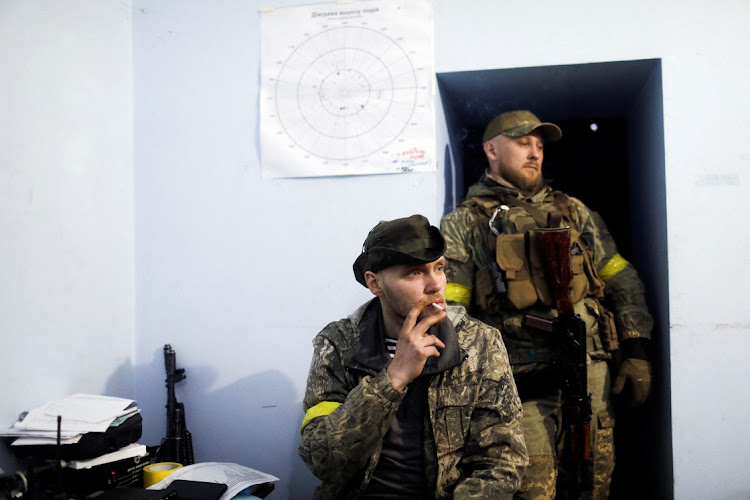 A Ukrainian serviceman smokes inside a basement used as a command post in Ruska Lozova, a village retaken by the Ukrainian forces, amid Russia’s attack on Ukraine, in Kharkiv region, Ukraine, on May 15 2022. Picture: REUTERS/RICARDO MORAES

Ruska Lozova — Ukrainian troops counterattacking against Russian forces in the country’s northeast have pushed them back from the city of Kharkiv and advanced as far as the border with Russia, Ukrainian officials said on Monday.

The developments, if confirmed, would signal a further shift in momentum in favour of Ukrainian forces nearly three months into a conflict that began when Russia sent tens of thousands of troops over the border into Ukraine on February 24.

Moscow meanwhile warned of “far-reaching consequences” should Finland and Sweden go ahead with plans to join the Nato military alliance — a change in the Nordic countries’ long-standing policy of neutrality brought on by concern about Russian President Vladimir Putin’s wider ambitions.

Fighting was reported near Kharkiv, Ukraine’s second-largest city, on Monday in what interior ministry adviser Vadim Denisenko said was “our counteroffensive”.

“It can no longer be stopped...Thanks to this, we can go to the rear of the Russian group of forces,” he said.

Kharkiv, lying about 50km from the border with Russia, had endured weeks of heavy bombardments from Russian artillery. The Russians’ routing from there follows their failure to capture the capital Kyiv in the early stages of the war.

However, thousands of people, including many civilians, have been killed across the country, towns and cities have been blasted into ruins, and more than six-million people have fled their homes to seek refuge in neighbouring states in scenes not seen in Europe since the Balkan wars of the 1990s. Russia denies targeting civilians.

Ukraine’s defence ministry said on Monday the 227th Battalion of the 127th Brigade of Ukraine’s Territorial Defence Forces had reached the border with Russia.

“Together to victory!” it said.

Kharkiv region governor Oleh Sinegubov said the troops had restored a sign on the border.

“We thank everyone who, risking their lives, liberates Ukraine from Russian invaders,” Sinegubov said.

Reuters could not immediately verify Ukraine’s battlefield account and it was not clear how many troops had reached the Russian border or where.

If confirmed it would suggest a Ukrainian counteroffensive is having increasing success in pushing back Russian forces in the northeast after Western military agencies said Moscow’s offensive in two eastern provinces known as the Donbas had stalled.

Nonetheless, the governor of the Luhansk region in Donbas, Serhiy Gaidai, said the situation “remains difficult”, with Russian forces trying to capture the town of Sieverodonetsk.

He said leaders of the Lugansk People’s Republic, the territory in Luhansk controlled by Russian-backed separatists, declared a general mobilisation, adding it was “either fight or get shot, there is no other choice”.

In the south, fighting was raging around the city of Kherson and Russian missiles struck residential areas of Mykolayiv, the presidential office in Kyiv said. Reuters was unable to verify the reports.

In a blow for Russia, which has long opposed Nato expansion, Finland on Sunday confirmed it would apply to join the alliance.

But Russia’s deputy foreign minister, Sergei Ryabkov, said on Monday that Finland and Sweden were making a mistake that would have far-reaching consequences.

“They should have no illusions that we will simply put up with it,” Ryabkov said, quoted by the Interfax news agency.

“The general level of military tension will rise, predictability in this sphere will decrease,” Ryabkov said.

Nato and the US said they were confident both countries would be accepted into the alliance and that reservations from Turkey, which wants the Nordic countries to halt support for Kurdish militant groups present on their territory, could be overcome.

Moscow calls its invasion of Ukraine a “special military operation” to rid the country of fascists, an assertion Kyiv and its Western allies say is a baseless pretext for an unprovoked war.

British military intelligence said Russia had lost about a third of the ground combat force deployed in February, and its Donbas offensive had fallen “significantly behind schedule”.

The most intense fighting appeared to be around the eastern Russian-held city of Izium, where Russia said it had struck Ukrainian positions with missiles.

There was also no letup on Sunday in Russia’s bombardment of the steelworks in the southern port of Mariupol, where a few hundred Ukrainian fighters are holding out weeks after the city fell into Russian hands, the Ukrainian military said.

Alexander Khodakovsky, a commander of separatist forces in Donetsk, said on his Telegram channel on Monday that 10 Ukrainian fighters emerged from a tunnel at the Azovstal steel plant holding white flags. Reuters could not verify the report.

Ukrainian President Volodymyr Zelensky said “very difficult and delicate negotiations” were going on to save Ukrainians in Mariupol and Azovstal.

Ukrainian troops received a morale boost from the country’s win in the Eurovision song contest at the weekend, with some saying it was a sign of battlefield victories to come.

“We have shown that we cannot only fight, but we can also sing very nice,” said Vitaliy, a soldier bunkered down north of Kyiv.

Social Democratic Party slumps to 27.5% in its former stronghold —  its worst-ever result there, exit polls show
News
1 month ago

There has also been renewed fighting around Snake Island, a strategically located islet controlling vital shipping lanes in the Black Sea
World
1 month ago
Next Article