Russia has lost about a third of its ground combat force, according to British military intelligence 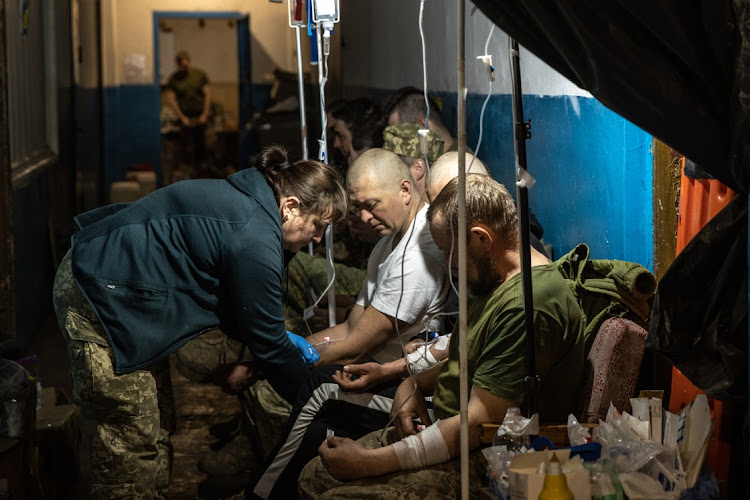 Kyiv — The front lines in the Ukraine war have shifted as Russia made advances in the fiercely contested eastern Donbas region and the Ukrainian military on Sunday waged a counteroffensive near the strategic Russian-held city of Izium.

In the west of Ukraine near the Polish border, missiles destroyed military infrastructure overnight and were fired at the Lviv region from the Black Sea, Ukrainian officials said.

Ukrainian forces have notched up a string of successes since Russia invaded on February 24, forcing Russia’s commanders to abandon an advance on Kyiv and then making rapid gains in the northeast to drive them out of the second-biggest city, Kharkiv.

Since mid-April Russian forces have focused much of their firepower on Donbas after failing to take the capital.

An assessment by British military intelligence issued on Sunday said Russia has lost about a third of the ground combat force deployed in February. Its Donbas offensive has fallen “significantly behind schedule” and is unlikely to make rapid advances in the coming 30 days, the assessment said.

On Saturday night Ukraine received a morale boost with victory in the Eurovision Song Contest, a triumph seen as a sign of the strength of popular support for Ukraine across Europe.

Ukrainian President Volodymyr Zelensky welcomed the win but said the situation in Donbas remains difficult and Russian forces are still trying to salvage some kind of victory in a region racked by conflict since 2014. “They are not stopping their efforts,” he said.

Izium straddles the Donets river, about 120km  from Kharkiv on the main highway heading southeast. Maintaining pressure on Izium and Russian supply lines will make it harder for Moscow to encircle battle-hardened Ukrainian troops on the eastern front in the Donbas.

“The hottest spot remains the Izium direction,” regional governor Oleh Sinegubov said in comments aired on social media. “Our armed forces have switched to a counteroffensive there. The enemy is retreating on some fronts and this is the result of the character of our armed forces.”

But Ukraine's military acknowledged setbacks in an update on Sunday morning: “Despite losses, Russian forces continue to advance in the Lyman, Sievierodonetsk, Avdiivka and Kurakhiv areas in the broader Donbas region.”

Both sides claimed success in military strikes in Donbas.

The Ukrainian military said there was no let-up on Sunday in Russia’s bombardment of the steel works in the southern port of Mariupol, where a few hundred Ukrainian fighters are holding out weeks after the city fell into Russian hands.

Zelensky said talks were under way seeking a way to evacuate wounded soldiers from Mariupol in return for the release of Russian prisoners of war.

A large convoy of cars and vans carrying refugees from the ruins of Mariupol arrived in the Ukraine-controlled city of Zaporizhzhia after nightfall on Saturday after waiting days for Russian troops to allow them to leave.

Iryna Petrenko, a 63-year-old in the convoy, said she had stayed initially to take care of her 92-year-old mother, who subsequently died. “We buried her next to her house, because there was nowhere to bury anyone,” Petrenko said.

One of the aims of Russia’s action in Ukraine was to prevent the former Soviet republic joining Nato.

But Finnish President Sauli Niinisto told Russian counterpart Vladimir Putin on Saturday that his country, which shares a 1,300km border with Russia, wants to join Nato to bolster its own security.

Sweden’s ruling Social Democrats were also poised on Sunday to come out in favour of the country joining Nato, paving the way for an application and abandoning decades of military non-alignment.

Putin told Niinisto it would be a mistake for Helsinki to abandon its neutrality, the Kremlin said, adding that the move could harm bilateral relations.

Germany said on Sunday that it has made preparations for a quick ratification process if Finland and Sweden apply. “We must make sure we will give them security guarantees. There must not be a transition period, a grey zone, where their status is unclear,” foreign minister Annalena Baerbock said.

As well as losing large numbers of men and much military equipment, Russia has been hit by economic sanctions. The Group of Seven industrial powers pledged on Saturday to “further increase economic and political pressure on Russia” and supply more weapons to Ukraine.

In another token of international solidarity, US Republican senators paid an unannounced visit to Kyiv. The delegation discussed further strengthening sanctions on Russia, Zelensky said.

Winners of the Eurovision Song contest traditionally get to host the event the following year. “Our courage impresses the world, our music conquers Europe! Next year Ukraine will host the Eurovision song contest,” Zelensky said in an online message after Kalush Orchestra won with their entry, Stefania.

Windfall for SA mining from Ukraine war may be brief