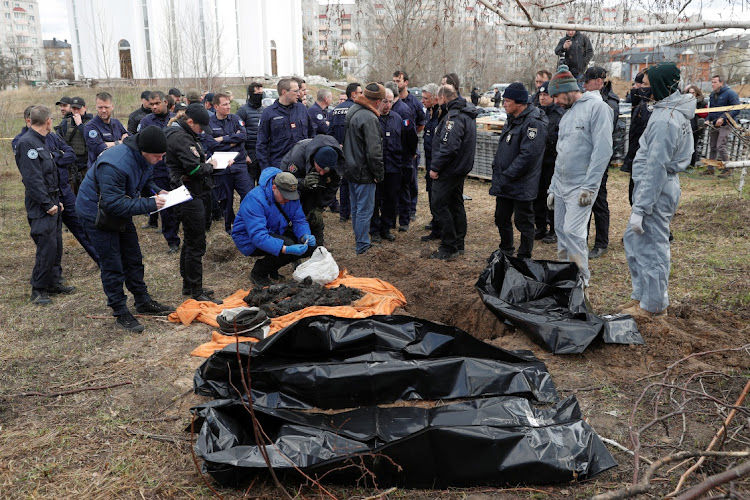 French forensics investigators, who arrived to Ukraine for the investigation war crimes amid Russia's invasion, watch as Ukrainian colleagues explore remains of bodies of burned civilians exhumed from a grave in the town of Bucha, Ukraine on April 13, 2022. Picture: REUTERS/VALENTYN OGIRENKO

It said the other individuals include two operators of a rocket launcher who allegedly shelled settlements in the Kharkiv region and two army servicemen suspected of murdering a Kyiv area resident and raping his wife.

The prosecutor’s office said it had notified the individuals that they are suspects and the investigations are ongoing, adding no charges had been filed with the court. It didn’t name the suspects or provide evidence to support the allegations. It said some of the suspects were held as captives, without specifying where, while other charges were being prepared in absentia.

Ukraine says it is investigating some 7,600 potential war crimes and at least 500 suspects following Russia’s February 24 2022 invasion of its neighbour. Prosecutor general Iryna Venediktova told Reuters that many of those suspects are in Russia, but some have been taken captive by Ukraine as prisoners of war. Speaking in an interview earlier this month, she said that her office intends to follow the chain of command up the Russian political and military hierarchy.

Venediktova added that she plans to pursue prosecutions both in Ukrainian courts as well as at the International Criminal Court (ICC) in The Hague, the world’s permanent war crimes tribunal.

The Kremlin and Russia’s defence ministry didn’t respond to requests for comment. Moscow has rejected allegations by Ukraine and Western nations of war crimes and has denied targeting civilians in what the Kremlin calls a “special military operation” to demilitarise its neighbour.

Ukraine’s probe is at the centre of multiple efforts to investigate potential war crimes related to the conflict, including by the ICC. The probes are at the very early stages, people familiar with them say. The ICC has sent an advance team to the region to establish operations.

Ukraine, which is conducting its investigation while still in the throes of war, is scrambling to assemble teams of specialists with war crimes expertise, evaluating potential crimes and developing its prosecution strategy.

“You can see they are now exhuming the bodies, so [the investigation is at a] very early stage,” a person familiar with the process said. In terms of strategy, Kyiv plans to prosecute as much as it can in Ukrainian courts, but would likely leave any cases involving higher-ranking figures to the ICC, the person added.

The UN has also established its own inquiry into possible violations of international humanitarian law in Ukraine, including possible war crimes, which could feed into any prosecutions by the ICC.

There is also an EU-co-ordinated effort to fast track sharing of evidence between various investigating authorities, including with the ICC. Several European countries have said they will apply universal jurisdiction, the legal principle that some crimes are so terrible they can be heard by foreign national courts, and their prosecutors could launch investigations into Ukrainian atrocities.

For Ukraine, the immediate challenge is the sheer volume of potential evidence and witness testimony that needs to be secured and recorded in a way that is usable in court, legal specialists say. That includes vast amounts of digital imagery as well as material gathered on the ground.

David Schwendiman, a former US federal prosecutor who has helped prosecute war crimes committed during the Balkan wars in the 1990s, praised Ukraine’s prosecutor general as talented and courageous, but said the country doesn’t have experience of an investigation of this scale and will fast track processing potential crime scenes in a way that meets international standards.

Zera Kozlyieva, deputy head of the war crimes unit in the prosecutor general’s office, acknowledged that limited access due to ongoing hostilities and a shortage of war crimes specialists presented challenges. Speaking Thursday on a panel at international affairs think-tank Chatham House, she said that Kyiv is seeking help from international experts.

Images of dead civilians in Ukraine, including of mass graves and bodies of bound civilians shot at close range, have prompted international outrage, with US President Joe Biden calling for Russian President Vladimir Putin to be investigated for war crimes. Ukrainian President Volodymyr Zelensky has accused invading Russian troops of committing “the most terrible war crimes” since World War 2.

According to the UN, as of April 22 more than 2,400 civilians had been killed since the conflict began in late February 2022. But the official count is likely to climb. In the port city of Mariupol alone, local authorities have said thousands of people have been killed.

Under international law, war crimes include intentionally targeting civilian populations, wilfully killing or causing suffering, and widespread destruction among other serious violations of laws applicable in armed conflict. Individuals who commit such crimes can be prosecuted by international tribunals such as the ICC and by states.

Experts for the Organisation for Security and Co-operation in Europe (OSCE) said in a report published earlier in April that they found evidence of war crimes and crimes against humanity by Russia in Ukraine. The experts also said in the report that they’d found evidence of violations of international humanitarian law by Ukraine, particularly in its treatment of prisoners of war, but that Russia’s violations “are by far larger in nature and scale.”

Ukraine has said it checks all information regarding the treatment of prisoners of war, will investigate any violations and take appropriate legal action. Russia has said the report “is based solely on unfounded propaganda theses, contains references to dubious sources and logical stretches in the style of ‘highly likely’”.

The prosecutor general’s office had in recent years established a special unit to investigate potential crimes in Crimea, which Russia annexed in 2014, but Kyiv continues to claim as part of Ukraine and Donbas.

Moscow’s February invasion of its Western neighbour forced Kyiv to scale up what had been a relatively small team of prosecutors.

Venediktova and her team have in recent weeks been evaluating sites where atrocities have taken place, including where Russian troops have recently withdrawn.

On April 12 2022, Venediktova visited Bucha, near Kyiv, where French forensic experts had arrived to help Ukraine authorities establish what happened in the town where hundreds of bodies have been discovered. As the group from the French Gendarmerie’s forensic science department looked on, workers in hazmat suits dug earth from a shallow grave and lifted out a heavy mass wrapped in an orange blanket. Citing witnesses, Venediktova said during the visit that the burnt body parts inside were those of a woman and her two children.

Russia has said that images and footage of dead bodies strewn across Bucha were fake.

Venediktova is also drawing on international legal expertise and seeking technical assistance. She has announced the formation of a task force of law firms and prominent international human rights lawyers, including Amal Clooney, to advise on securing accountability for Ukrainian victims in national jurisdictions as well as strategic guidance on co-operating with the ICC.

Venediktova is in regular contact with Beth Van Schaack, ambassador-at-large for global criminal justice in the US state department, who said the two have discussed what additional assistance Washington could provide. Van Schaack’s office has been helping to deploy specialists on the ground via a joint US-European project.

Van Schaack told Reuters that Venediktova’s requests for assistance include forensics expertise, such as helping determine how victims found in mass graves died and whether potential signs of torture were inflicted before death. Other requests include help identifying the type and origins of particular ballistics used as well as assistance clearing any mines left by Russians, so that her investigators can safely access those areas.

Ukraine’s potentially biggest challenge, said Van Schaack, will be gaining custody of suspects, particularly those higher up the command chain. If they remain in Russia, they may “enjoy impunity for the rest of their days,” she said.