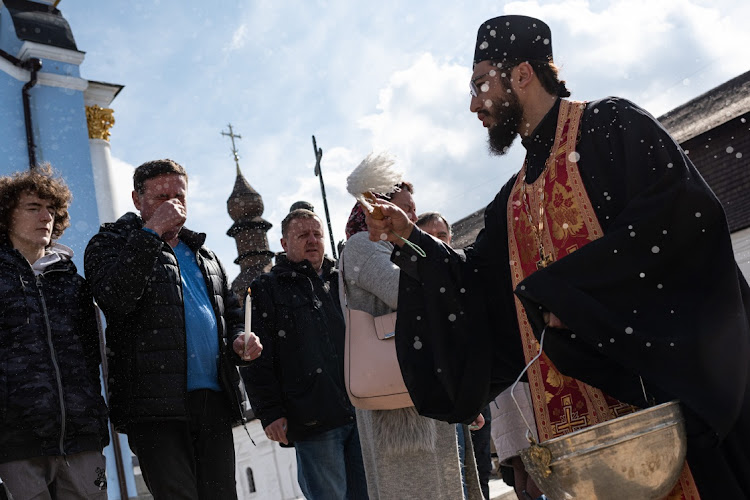 The trip, announced by Ukrainian President Volodymyr Zelensky on Saturday, would be the highest-level visit by US officials since Russian tanks rolled into Ukraine on February 24.

The White House has not confirmed any visit by Blinken and Austin. The state department and Pentagon declined to comment.

As Christians in Ukraine marked Orthodox Easter on Sunday, there was no end in sight to a war that has killed thousands of people, uprooted millions more and reduced cities to rubble.

“I pray that this horror in Ukraine ends soon and we can return home,” said Nataliya Krasnopolskaia, who was spending Easter in Prague and is one of the more than 5-million Ukrainians estimated to have fled the country.

Serhiy Gaidai, governor of the eastern Luhansk region, said Easter celebrations had been shattered by the conflict. He said seven churches in his region had been “mutilated by Russian artillery” in the conflict. Reuters could not independently verify his report.

Zelensky said in an Easter video message from Kyiv’s 1,000-year-old Saint Sophia Cathedral that Ukraine would not be defeated by “wickedness” and prayed for “endurance to those who, unfortunately, would not see the return of their child from the front”.

He had earlier said talks with his US visitors would cover the “powerful, heavy weapons” Ukraine needed to retake territory and the pace of deliveries. He did not specify what equipment he would ask for.

The US and Nato allies have shown growing readiness to supply heavier equipment and more advanced weapons systems. Britain has promised to send military vehicles and said it was considering supplying British tanks to Poland to free up Warsaw’s Russian-designed T-72s for Ukraine.

Moscow, which describes its actions in Ukraine as a “special military operation”, denies targeting civilians and rejects what Ukraine says is evidence of atrocities, saying Kyiv staged them to undermine peace talks.

Turkish President Recep Tayyip Erdogan said after talks by phone with Zelensky that Ankara was ready to assist in negotiations with Russia, after earlier rounds of talks showed no sign of helping end the conflict. He also called for evacuating civilians from the devastated southern city of Mariupol.

Ukraine said Russia was continuing to bombard the Azovstal steel works in Mariupol where Ukrainian defenders were holding out, though Moscow previously declared victory in the city and said it did not need to take the plant.

As the Russian offensive in eastern Ukraine begins to unfold, Pentagon spokesman John Kirby says 18 US howitzers to bolster Ukraine’s defence will be transported “very soon”.

“The place where our civilians and military are located is shelled with heavy air bombs and artillery,” senior Ukrainian presidential adviser Mykhailo Podolyak said on Twitter, calling for “a real Easter truce in Mariupol”.

Capturing Mariupol, the site of the biggest battle of the conflict, would link up pro-Russian separatists who control parts of the eastern regions of Donetsk and Luhansk that make up the Donbas with the southern Black Sea peninsula of Crimea, which Moscow seized in 2014.

Ukraine estimates tens of thousands of civilians have been killed in Mariupol and says 100,000 civilians are still in the city. The UN and Red Cross say the civilian toll is at least in the thousands.

Oleksiy Arestovych, an adviser to Zelensky, said troops in the giant Azovstal steel complex were attempting counterattacks. More than 1,000 civilians are also in the plant, Ukraine says.

Ecumenical patriarch Bartholomew, the spiritual head of Eastern Orthodox Christians worldwide, called for humanitarian corridors in Mariupol and other areas of Ukraine, where he said “an indescribable human tragedy is unfolding”.

Ukraine said Russian forces were continuing their offensive in east Ukraine to try to establish full control over Donetsk and Luhansk with attacks on military and civilian sites.

The governor of Donetsk, Pavlo Kyrylenko, said two children were killed by shelling in his area on Sunday.

Reuters could not independently confirm the reports.

British military intelligence said Ukrainian resistance had been strong, especially in Donbas, despite some Russian gains.

“Poor Russian morale and limited time to reconstitute, re-equip and reorganise forces from prior offensives are likely hindering Russian combat effectiveness,” it said.

Russia said on Sunday its missiles hit eight military targets overnight, including four arms depots in the northeast Kharkiv region and one facility in the Dnipropetrovsk region producing explosives for the Ukrainian army.

Moscow had said on Saturday its missiles destroyed a logistics terminal in the southern city of Odesa containing weapons supplied by the US and European states.

Zelensky said eight people, including a three-month-old child, were killed in the Odesa strike.

Mariupol mayor begs for ‘only one thing’: full evacuation

About 100,000 civilians in the port city are in desperate conditions following nearly two months of heavy bombardment by Russian forces
World
2 months ago

‘Russophobic’ Mark Zuckerberg and 28 others banned from Russia

‘Russophobic’ Mark Zuckerberg and 28 others banned from Russia