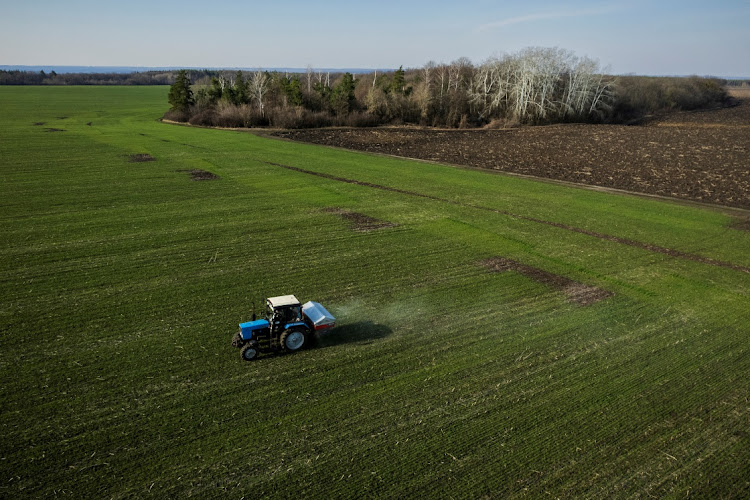 An aerial view shows a tractor spreading fertiliser on a wheat field near the village of Yakovlivka after it was hit by an aerial bombardment outside Kharkiv. File photo: REUTERS/THOMAS PETER

Zurich — Ukraine has insufficient storage capacity even for its reduced 2022 grain harvest, the UN’s World Food Programme said on Tuesday, with the country struggling to export existing stocks during the invasion by Russia.

Jakob Kern, the World Food Programme’s emergency co-ordinator in Ukraine, cited estimates that 20% of planted areas in Ukraine will not be harvested in July and that the spring planting area will be about a third smaller than usual.

Ukraine is the world’s fifth-biggest exporter of wheat and in the top three for maize, barley and sunflower seeds. Wheat production in 2021 was about 40-million tonnes, with another 50-million tonnes for the other three commodities.

A big challenge this year is exporting of existing grain stocks to provide storage capacity for the 2022 harvest and generate cash to buy seeds and fertilisers for the next planting season, Kern told a Geneva news briefing via video link from Ukraine.

Kern cited the country’s agriculture ministry as saying Ukraine used to export almost all its grain and oilseeds — up to 6-million tonnes a month — via seaports that are now blocked by the conflict.

“The minister told us last week that the main concern at this stage is the lack of storage capacity to bring in the 2022 grain harvest. An estimated 15-million tonnes of grains will not have space in the silos around the country,” he said.

If Ukraine cannot export its current stocks, farmers may not be able to afford harvesting costs, let alone plant the next year’s crop, he added.

The lack of Ukrainian grain on world markets has been pushing up food prices around the world. The World Food Programme is spending $70m more a month to buy the same amount of food as last year, Kern said.

Western countries say Russia is now reinforcing and resupplying its troops for an intensified offensive in eastern Ukraine.
World
2 months ago