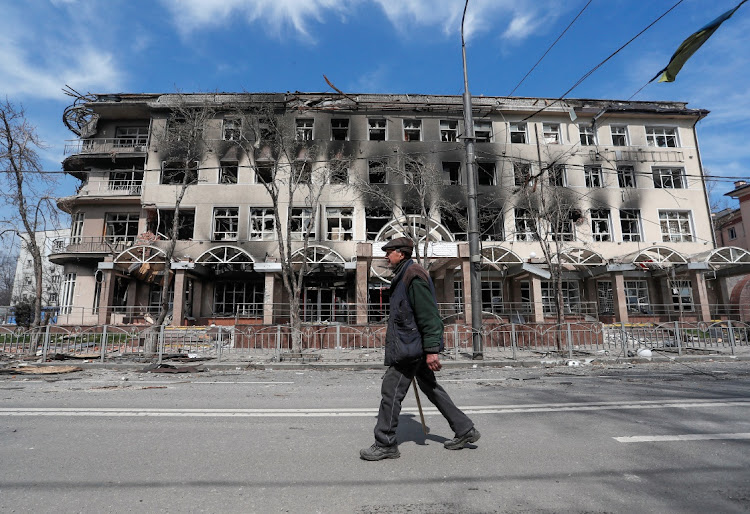 A man walks near a building destroyed in the course of the Ukraine-Russia war, in the southern port city of Mariupol, Ukraine, April 10 2022. Picture: ALEXANDER ERMOCHENKO/REUTERS

Washington — Ukraine’s economic output will probably contract by a staggering 45.1% in 2022 as Russia’s invasion has shuttered businesses, slashed exports and rendered economic activity impossible in large swathes of the country, the World Bank said on Sunday in a new report.

The World Bank also forecast Russia’s 2022 GDP output to fall 11.2% due to punishing financial sanctions imposed by the West  on Russia’s banks, state-owned enterprises, wealthy individuals and other institutions.

The World Bank’s “War in the Region” economic update said the Eastern Europe region, comprising Ukraine, Belarus and Moldova, is forecast to show a GDP contraction of 30.7% in 2022, due to shocks from the war and disruption of trade.

Growth in 2022 in the Central Europe region, comprising Bulgaria, Croatia, Hungary, Poland and Romania, will be cut to 3.5% from 4.7% previously due to the influx of refugees, higher commodity prices and deteriorating confidence hurting demand.

For Ukraine, the World Bank report estimates that over half of the country’s businesses are closed, while others still open are operating at well under normal capacity. The closure of Black Sea shipping from Ukraine has cut off about 90% of the country’s grain exports and half of its total exports.

The World Bank said the war has rendered economic activity impossible in large swathes of the country, and is disrupting agricultural planting and harvest operations.

Estimates of infrastructure damage exceeding $100bn by early March — about two-thirds of Ukraine’s 2019 GDP — are well out of date “as the war has raged on and caused further damage”.

The bank said the 45.1% contraction estimate excludes the impact of physical infrastructure destruction, but said this would scar future economic output, along with the outflow of Ukrainian refugees to other countries.

The World Bank said the magnitude of Ukraine’s contraction is “subject to a high degree of uncertainty” over the war’s duration and intensity.

“The Russian invasion is delivering a massive blow to Ukraine’s economy and it has inflicted enormous damage to infrastructure,” Anna Bjerde, the World Bank’s vice-president for Europe and Central Asia, said in a statement. “Ukraine needs massive financial support immediately as it struggles to keep its economy going and the government running to support Ukrainian citizens who are suffering and coping with an extreme situation.”

The World Bank has already marshalled about $923m in loans and grants for Ukraine, and is preparing a further support package of more than $2bn. The aid has helped Ukraine pay salaries for essential workers and make pension and sovereign debt payments, despite drastically reduced tax revenues, World Bank officials said.