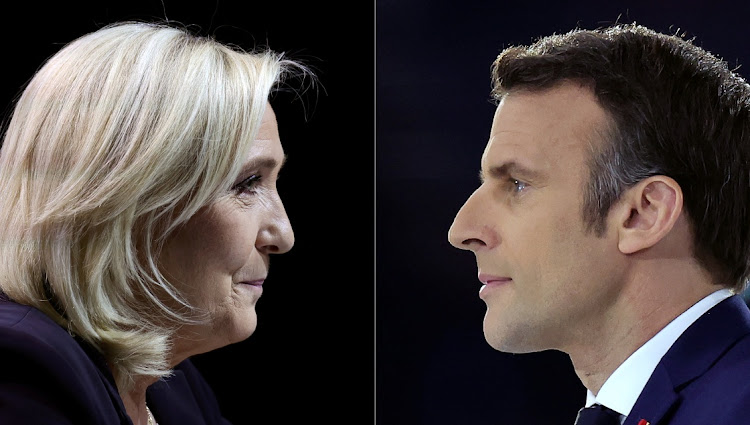 Macron led Le Pen in the first round, the separate estimates by Ifop, OpinionWay, Elabe and Ipsos showed. Macron won 28.1-29.5% of votes while Le Pen won 23.3%-24.4% of voter support, they projected.

That outcome would set up a duel between an economic liberal with a globalist outlook in Macron and a deeply Eurosceptic economic nationalist who, until the Ukraine war, was an open admirer of Russian President Vladimir Putin.

Not for two decades has a French president won a second term.

Barely a month ago, Macron appeared near certain to reverse that trend, riding high in polls thanks to strong economic growth, a fragmented opposition and his statesman role in trying to avert war on Europe's eastern flank.

But he has paid the price for late entry into the campaign during which he eschewed market walkabouts in provincial France in favour of a single big rally outside Paris. A plan to make people work longer has also proved unpopular. He has focused on the Ukraine war in recent weeks.

By contrast, Le Pen has for months toured towns and villages across France, focusing on cost-of-living issues that trouble millions and tapping into deep-seated anger towards the distant political elite.

A more than 10 point lead Macron had enjoyed as late as mid-March evaporated and voter surveys ahead of the first round showed his margin of victory in an eventual second round whittled down to within the margin of error.

A Le Pen victory on April 24 would constitute a similar jolt to the establishment as Britain's Brexit vote to leave the EU or Donald Trump's 2017 entry into the White House.

France, the EU’s second-largest economy, would lurch from being a driving force for European integration to being led by a Eurosceptic who is also suspicious of the Nato military alliance.

While Le Pen has ditched past ambitions for a “Frexit” or to haul France out of the eurozone’s single currency, she envisages the EU as a mere alliance of sovereign states.

Who next holds the Elysee Palace will depend on how those who backed Macron and Le Pen’s rivals cast their ballots.

In past elections in 2002 and 2017, voters on the Left and right have united to block the far-right from power.

However, surveys suggest that the so-called front republicain has crumbled, with many left-wing voters saying they are loath to endorse a leader they deride as arrogant and a “president of the rich”.

“We want change, so why not give her a chance (in round two)?” technician Alex Talcone said in the Paris suburb of Bobigny after voting for hard-left candidate Jean-Luc Melenchon.

Company executives celebrate Macron’s efforts to reduce bureaucracy and taxes, but Le Pen is closing in
News
2 months ago

To win, Le Pen will need to convince younger, economically deprived voters who tend to abstain often, to vote, and centre-left voters to stay home
News
2 months ago