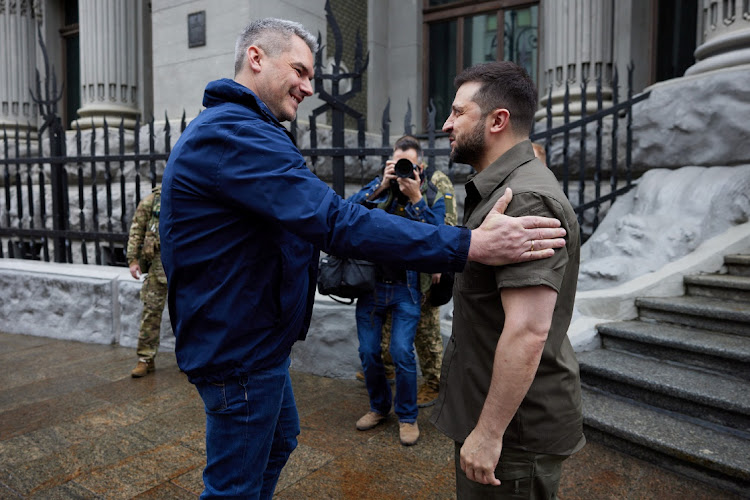 Kyiv/Buzova — Russian forces pounded targets in eastern Ukraine with missiles and artillery on Sunday as Austria's leader planned to meet Russian President Vladimir Putin and Washington pledged to give Ukraine “the weapons it needs” to defend itself against a new Russian offensive.

Austrian Chancellor Karl Nehammer said he would meet Putin on Monday in Moscow for the Russian leader’s first face-to-face meeting with a EU counterpart since Russia’s invasion began on February 24.

“We are militarily neutral, but (have) a clear position on the Russian war of aggression against Ukraine,” Nehammer wrote of Austria on Twitter. “It must stop! It needs humanitarian corridors, ceasefire & full investigation of war crimes.”

Nehammer said he had briefed other European partners regarding his visit to Moscow.

Kremlin spokesperson Dmitry Peskov confirmed to RIA news agency that Putin would be holding talks with Nehammer on Monday.

Russia has failed to take any major cities since it launched its invasion on February 24, but Ukraine says it has been gathering its forces in the east for a major assault and has urged people to flee. 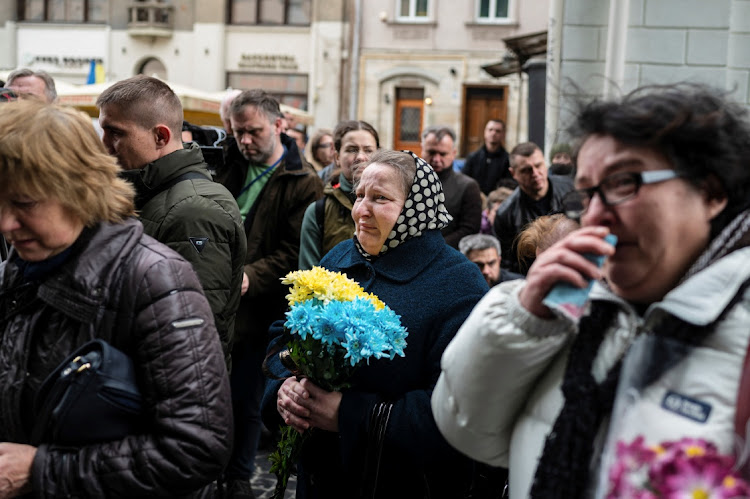 People attend the funeral ceremony of Yuriy Dadak-Ruf and Taras Kryt, killed due to artillery shelling in the Luhansk region, as Russia's invasion of Ukraine continues, in Lviv, Ukraine, April 9 2022. Picture: VIACHESLAV RATYNSKYI/REUTERS

Russia’s defence ministry said high-precision missiles had destroyed the headquarters of Ukraine’s Dnipro battalion in the town of Zvonetsky. Reuters could not immediately confirm the reports.

Since Russia invaded, Zelensky has appealed to Western powers to provide more defence help, and to punish Moscow with tougher sanctions, including embargoes on Russian energy exports.

US national security adviser Jake Sullivan told ABC News: “We’re going to get Ukraine the weapons it needs to beat back the Russians to stop them from taking more cities and towns.”

In excerpts from an interview with CBS, Zelensky said he had confidence in his own armed forces but “unfortunately I don’t have the confidence that we will be receiving everything we need” from the US.

Zelensky said earlier on Twitter he had spoken on the phone with German Chancellor Olaf Scholz about additional sanctions, as well as more defence and financial support for his country. Zelensky also discussed with Ukrainian officials Kyiv’s proposals for a new package of EU sanctions, his office said.

In a video address late on Saturday, Zelensky renewed his appeal for a total ban on Russian energy products and more weapons for Ukraine.

The EU on Friday banned Russian coal imports among other products, but has yet to touch oil and gas imports from Russia.

A grave with at least two civilian bodies has been found in Buzova village near Kyiv, said Taras Didych, head of the Dmytrivka community that includes Buzova, the latest such reported discovery since Russian forces withdrew from areas north of the capital to focus on the east of the country.

Sullivan said on Sunday he expected Russia’s newly appointed general overseeing Ukraine, Aleksandr Dvornikov, to authorise more brutality against the Ukrainian civilian population. He did not cite any evidence.

Moscow has rejected accusations of war crimes by Ukraine and Western countries.

Moscow has repeatedly denied targeting civilians in what it calls a “special operation” to demilitarise” its southern neighbour. Ukraine and Western nations have dismissed this as a baseless pretext for war.

Russia’s invasion has forced about a quarter of Ukraine’s 44-million people from their homes, turned cities into rubble and killed or injured thousands.

Some cities in the east were under heavy shelling, with tens of thousands of people unable to evacuate.

Calls by Ukrainian officials for civilians to flee gained more urgency after a missile strike hit a train station on Friday in the city of Kramatorsk, in the Donetsk region, that was full of people trying to leave.

Ukrainian officials said on Sunday that the death toll from the strike rose to 57, while 109 were wounded. Russia has denied responsibility, saying the missiles used in the attack were only used by Ukraine's military. Reuters was unable to verify the details of the attack.

Residents of the region of Luhansk would have nine trains on Sunday to get out on, the region’s governor, Serhiy Gaidai, wrote on the Telegram message service.

Ukraine deputy prime minister Iryna Vereshchuk said 2,824 people were evacuated on Sunday through humanitarian corridors, including 213 from Mariupol, which has been under siege for weeks.

In a Palm Sunday homily, Pope Francis called for an Easter truce in Ukraine and, in an apparent reference to Russia, questioned the value of planting a victory flag “on a heap of rubble”.

At a sermon in Moscow, Patriarch Kirill, the head of Russia’s Orthodox Church and a close ally of President Vladimir Putin, called on people to rally around the authorities.