Seized superyacht racks up bills, but who will pay them?

The move highlights complexities as authorities target the assets of Vladimir Putin’s allies, and the disruption being brought to some businesses 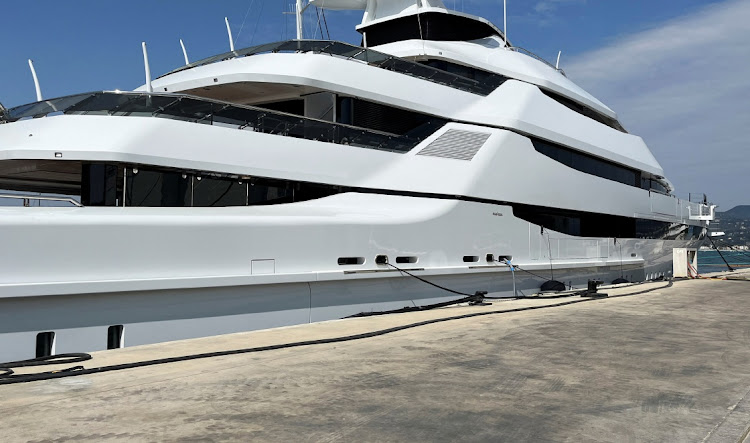 La Ciotat — In a quiet corner of the French Riviera, La Ciotat Shipyards said it was writing bills for mooring fees for the towering white superyacht Amore Vero, but it did not know who to send them to.

Customs agents seized the 86m vessel as its crew prepared to sail out of harbour on the night of March 2, two days after the EU added Igor Sechin, the head of Russian state oil company Rosneft, to its sanctions list for the war in Ukraine.

Frances finance ministry says the yacht belongs to a company controlled by Sechin — one of Russian President Vladimir Putin's oldest allies. The ministry declined to name the firm.

But Sechin — in a statement sent to Reuters by Rosneft — denied this.

Finance minister Bruno Le Maire said France had officially seized the Amore Vero — a measure that officials said gives the state custody over the yacht and leaves costs with the owner.

But authorities have not notified third parties of the vessel’s status, leaving it unclear who is responsible for its upkeep, said two companies involved in servicing the yacht. As bills pile up, an executive at La Ciotat Shipyards said the company was unsure how to get paid.

Boisseau declined to answer further questions. France’s customs agency declined to comment on why it had not informed the shipyards of the yacht’s status.

The questions hanging over the Amore Vero point to the complexities authorities face as they target the assets of Putin’s allies, and the disruption being brought to some businesses.

In the EU, oligarchs’ financial wealth remains largely untouched, but European states have frozen or seized physical assets, including properties and at least 11 superyachts.

John Dalby, owner of Marine Risk Management, which recovers maritime assets on behalf of insurers and banks, said Mediterranean governments had little experience in the legal intricacies of seizing superyachts.

“There's a lack of cohesion in what people are doing: between state actors and other third parties, like creditors,” Dalby said, adding that he had spoken with authorities in the Mediterranean and the US.

He said that creditors of seized yachts — such as fuel suppliers or crew management firms — could ask a court to sell the vessel to recoup their debts. France's customs agency did not comment.

Russians own nearly one in every 10 superyachts, according to specialist website Superyacht Times.

Some of those owned by sanctioned individuals are moored in safe havens — such as Roman Abramovich’s Eclipse and Solaris in Turkey — or are sailing in international waters beyond the jurisdict of sanction-imposing states.

The Amore Vero had been in port in France undergoing a refit by luxury yacht specialist MB92 when sanctions were imposed, Le Maire said.

Authorities had seized rather than merely “frozen” the Amore Vero because its attempt to leave port contravened the EU sanctions regime and broke French law, the minister said.

MB92, asked if it had received full payment for the refit or whether it expected to do so, told Reuters: “We are still waiting for formal notification from customs that will clarify the official status of the vessel.”

Maritime lawyer Pascal Flot said difficulties determining the ownership of megayachts might be one reason French authorities had not notified third parties of the Amore Vero’s status.

The super-rich often control their assets through a web of shell companies in offshore tax havens, Flot said. The Amore Vero flies under a Cayman Islands flag.

The annual running costs of the biggest superyachts can amount to 10% of their value, Flot said, including the crew’s salary, repairs, fuel, food, insurance, berth fees and onshore utilities.

For a vessel like the $540m Sailing Yacht A, owned by coal and fertiliser baron Andrei Melnichenko and detained in the Italian port of Trieste, that could mean millions of dollars each month.

In Italy, frozen assets are managed by a publicly appointed administrator and maintenance expenses are borne by the state property agency. They must later be reimbursed by the owner or the state can sell the asset to recoup its expenses.

Italy’s Agenzia del Demanio declined to comment. Representatives for Melnichenko did not reply to a request for comment.

In France and in Spain, the running costs of a “frozen” or seized yacht remain the owner’s responsibility. However, blocks on their bank accounts meant that sanctioned owners were often unable to make payment, said Rachel Lynch of the seafarer union Nautilus International.

A seized yacht whose ownership could not be linked to a name on the sanctions list had to be released, leaving the state liable for any deterioration in condition or damage during its immobilisation, he said. Owners might also sue for loss of charter earnings or for prohibition of use.

“All those matters need to be carefully dealt with by the seizing state to avoid nasty surprises.” Markogiannis said.