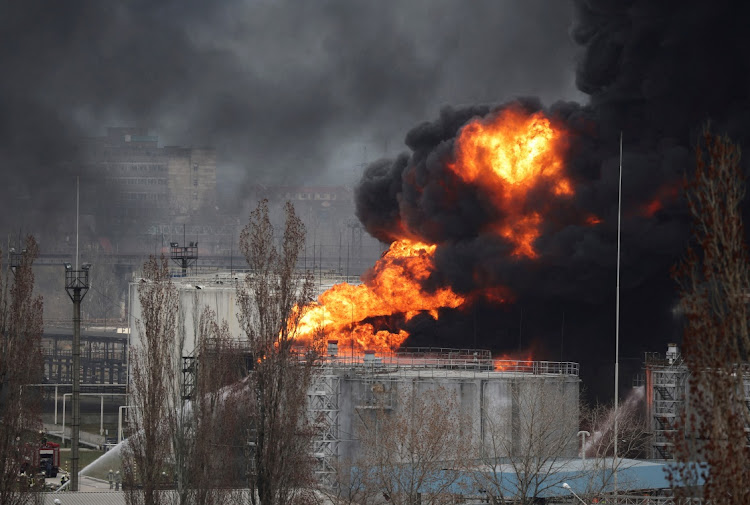 Firefighters battle to extinguish an oil refinery blaze following a missile attack near the port city of Odesa, amid the ongoing Russia's invasion, in Ukraine, April 3 2022. Picture: NACHO DOCE/REUTERS

Odesa/Lviv — Missiles struck near Ukraine’s southern port of Odesa on Sunday with Russia saying it had destroyed an oil refinery used by the Ukrainian military, while attempts to evacuate people from the devastated city of Mariupol were due to continue.

There was little sign of a breakthrough in efforts to negotiate an end to the five-week war, though Russia’s chief negotiator said talks were due to resume on Monday.

In Odesa, the city council said “critical infrastructure facilities” were hit by missiles. No casualties were reported.

Russia’s defence ministry said strikes by its military destroyed an oil refinery and three fuel storage facilities near Odesa. It said the facilities were used to supply Ukrainian troops near the city of Mykolaiv.

Odesa, on the Black Sea, is the main base for Ukraine’s navy. It has been targeted by Russian forces seeking a land corridor to Transdniestria, a Russian-speaking breakaway province of Moldova which hosts Russian troops. 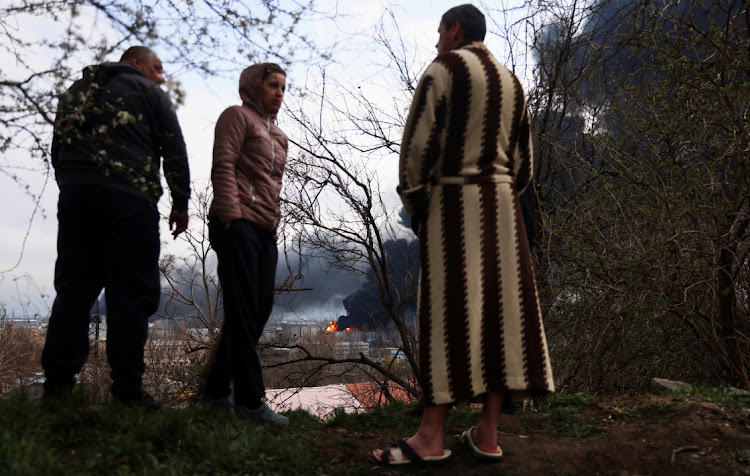 “Smoke is visible in some areas of the city. All relevant systems and structures are working ... No casualties reported,” Vladyslav Nazarov, an officer of Ukraine’s South Operational Command, said on Telegram.

Dmytro Lunin, governor of the central Poltava region, said the Kremenchug oil refinery, 350km northeast of Odesa, had been destroyed in a separate rocket attack on Saturday.

Evacuation efforts in Mariupol and nearby Berdyansk, both also on Ukraine’s southern shores, were due to continue with a convoy of buses being prepared for the operation with help from the Red Cross.

“Seven buses will try to get closer to Mariupol, accompanied by the International Committee of the Red Cross,” Ukrainian deputy prime minister Iryna Vereshchuk said in an online video posting.

The Red Cross abandoned earlier attempts due to security concerns. Russia blamed the Red Cross for the delays.

Mariupol is Russia’s main target in Ukraine's southeastern region of Donbas, and tens of thousands of civilians there are trapped with scant access to food and water. 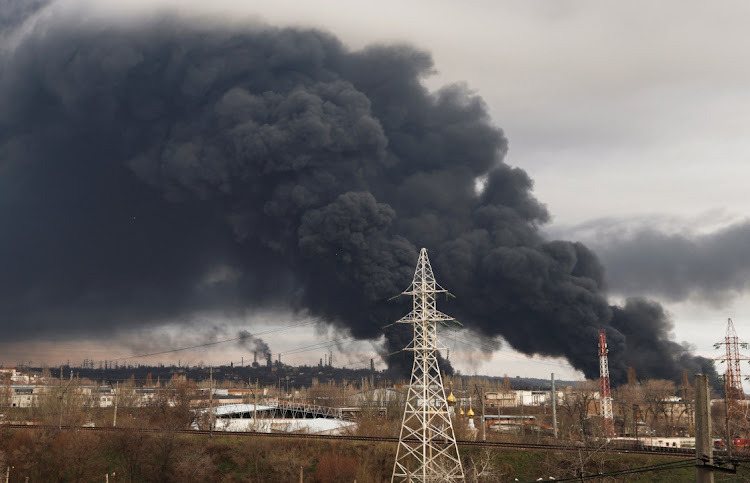 A fire is seen at an oil refinery following a missile attack near the port city of Odesa, amid the ongoing Russia's invasion, in Ukraine, April 3 2022. Picture: NACHO DOCE/ REUTERS

On Saturday, Ukrainian negotiator David Arakhamia raised hope for negotiations with Russia, saying enough progress had been made for direct talks between the two.

Medinsky said that while Ukraine was showing more realism by agreeing to be neutral, renouncing nuclear weapons, not joining a military bloc and refusing to host military bases, there had been no progress on other Russia demands.

“I repeat again and again: Russia’s position on Crimea and Donbas remains UNCHANGED,” he said on Telegram, adding talks via videoconference would continue on Monday.

Russia annexed Crimea from Ukraine in 2014 and has recognised declarations of independence by the self-proclaimed republics of Luhansk and Donetsk in the Donbas area of eastern Ukraine which rose against Kyiv’s rule.

Ukraine said on Saturday its forces had retaken all areas around Kyiv, claiming complete control of the capital region for the first time since Russia launched its invasion on February 24.

Russia has pulled back forces that had threatened Kyiv from the north to regroup for battles in eastern Ukraine.

There was no Russian comment on the claim that the Kyiv region was entirely in Ukrainian hands, which Reuters could not immediately verify.

The mayor of Bucha, a liberated town 37km  northwest of the capital, said 300 residents had been killed during a month-long occupation by the Russian army, and victims were seen in a mass grave and still lying on the streets.

“The bastards!” Vasily, a 66-year-old man said, weeping with rage as he looked at more than a dozen bodies in the road outside his house. “I’m sorry. The tank behind me was shooting. Dogs!”

The Kremlin and the Russian defence ministry in Moscow did not immediately reply to requests for comment when asked on Saturday about the bodies found in Bucha.

Among those killed near Kyiv was Maksim Levin, a Ukrainian photographer and videographer who was working for a news website and was a long-time contributor to Reuters.

British foreign secretary Liz Truss said she was appalled by atrocities in Bucha and voiced support for the International Criminal Court’s inquiry into potential war crimes.

Ukraine’s emergencies service said more than 1,500 explosives had been found in one day during a search of the village of Dmytrivka, west of the capital.

Zelensky warned in a video address: “They are mining all this territory. Houses are mined, equipment is mined, even the bodies of dead people.” He did not cite evidence.

Russia’s defence ministry did not reply to a request for comment on the allegations about mines. Reuters could not independently verify them.

Since the launch of what Putin called a “special military operation” to demilitarise and “denazify” Ukraine, Russia has failed to capture a single big city and has instead laid siege to urban areas, uprooting a quarter of the country’s population.

British military intelligence said Russian naval forces were maintaining a blockade along the Black Sea and the Sea of Azov, but the option of amphibious landings were becoming high-risk for Russia.

It said reported mines, the origin of which remained unclear and disputed, posed a serious risk to shipping in the Black Sea.

Tens of thousands trapped with scant access to food and water in besieged port of Mariupol, Moscow’s main target
World
4 months ago
Next Article

Zelensky makes stirring plea for more aid from US

Zelensky makes stirring plea for more aid from US