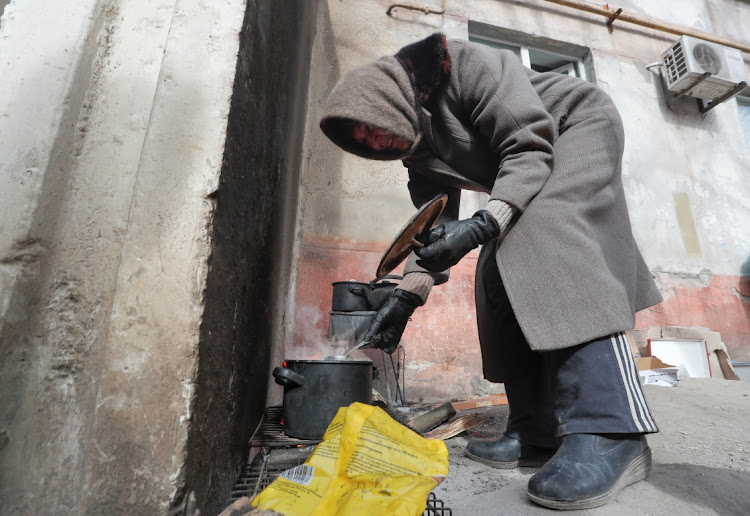 Ukraine defied a Russian demand that its forces lay down arms before dawn on Monday in Mariupol, where hundreds of thousands of civilians have been trapped in a city under siege and laid to waste by Russian bombardment.

Russia’s military had ordered Ukrainians in the city in the country’s southeast to surrender by 5am, saying that those who do so would be permitted to leave through safe corridors.

“There can be no question of any surrender, laying down of arms” in the city, Ukrainian deputy prime minister Iryna Vereshchuk responded. “We have already informed the Russian side about this.”

Russia’s assault on Ukraine, now in its fourth week, has stalled on most fronts. It has failed to seize a single major Ukrainian city or swiftly topple the government of President Volodymyr Zelensky.

But Russia has pounded residential areas, causing massive destruction. Nowhere has it been worse than suffered at Mariupol, a port on the Sea of Azov, home to 400,000 people before the war. Mariupol has been under siege and constant bombardment, with no food, medicine, power or fresh water, since the invasion’s early days.

Some people have been allowed out in private cars, but Russian forces have not allowed aid convoys or buses to evacuate civilians to reach the city.

“Lay down your arms,” Col-Gen Mikhail Mizintsev, director of the Russian National Centre for Defence Management, said in a briefing distributed by the defence ministry, announcing the ultimatum. “All who lay down their arms are guaranteed safe passage out of Mariupol.”

Ukrainian defence minister Oleksii Reznikov praised the city’s “heroic defenders”, saying that by holding out they had helped thwart Russia’s march on other big cities across the country.

“By virtue of their dedication and superhuman courage, tens of thousands of lives throughout Ukraine were saved. Today Mariupol is saving Kyiv, Dnipro and Odesa.”

Greece’s consul-general in Mariupol, Manolis Androulakis, who arrived home on Sunday after a four-day journey since escaping the siege, the last European diplomat to leave the city, said: “What I saw, I hope no-one will ever see.”

He described Mariupol as standing alongside Guernica, Leningrad and Russia’s previous targets Grozny and Aleppo in a list of cities “completely destroyed by war”.

Mariupol is in territory in the east, which Moscow demands be ceded to Russian-backed separatists. Their leader, Denis Pushilin, said it would take more than a week to capture it: “I am not so optimistic that two or three days or even a week will close the issue. Unfortunately, no, the city is big.”

Russia calls the war, the biggest attack on a European state since World War 2, a “special military operation” to disarm Ukraine and protect it from “Nazis”. The West says this is a false pretext for an unprovoked war of aggression to subdue a country President Vladimir Putin describes as illegitimate.

Nearly a quarter of Ukraine’s 44-million people have been driven from their homes, including 3.4-million who fled abroad, according to the UN. This is one of the fastest exoduses on record. A UN tally includes more than 900 confirmed civilian deaths but the true total is unknown.

Thousands of Russian and Ukrainian troops have died. Russia’s artillery-heavy army has suffered large losses in tanks and armour. Five Russian generals have  been killed, a loss of senior commanders in such a short period almost unheard of in modern warfare.

“We are fighting for our salvation against one of the world’s biggest armies, against missiles, bombs and rocket artillery, against planes and helicopters on which the Russians are already writing ‘To Berlin’ because they want to go further, much further, than Ukraine,” Zelensky said in his latest video address on Monday.

Ukrainian officials hope that Moscow, having failed to secure a quick victory, will cut its losses and negotiate a withdrawal. Both sides hinted last week at progress in talks on a formula that would include some kind of “neutrality” for Ukraine, though details were scarce.

The Kremlin repeated accusations on Monday that Kyiv was holding up talks. “There has been no significant progress so far,” said Kremlin spokesperson Dmitry Peskov.

In the capital, Kyiv officials imposed a day-and-a-half curfew from Monday night. While suburbs in the path of Russia’s advance have been reduced to rubble, defenders have managed to prevent Kyiv itself from coming under a full-scale assault. But it has been subjected to deadly shelling and missile strikes nightly. In the latest, authorities said at least eight people were killed by shelling that destroyed a shopping centre.

Apart from Mariupol, the eastern cities of Kharkiv, Sumy and Chernihiv have been hardest hit by Russia’s tactic of flattening urban areas with artillery.

Kharkiv mayor Igor Terekhov said hundreds of buildings, many of them residential, have been destroyed in the country’s second-largest city.

“The city is united ... Kharkiv will survive,” Terekhov said, describing hundreds of buildings destroyed. “It is impossible to say the worst days are behind us. We are constantly being bombed. There was shelling again overnight.”

UN agencies say 3.27-million people have fled Ukraine since the start of the Russian invasion and a further 2-million have been displaced internally
World
4 months ago

Emad Ballack is mobilising support to deliver food, basic necessities and clothing to civilians and security forces in Ukraine
World
4 months ago
Next Article