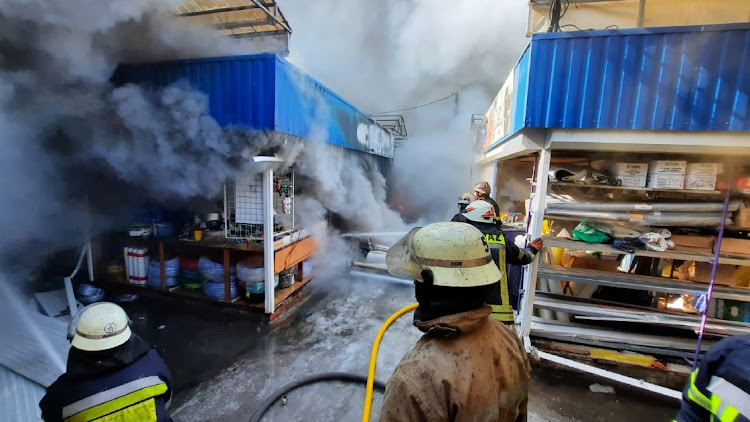 Rescuers work next to a household market damaged by shelling, as Russia's invasion of Ukraine continues, in Kharkiv, Ukraine, in this handout picture released March 16 2022. Picture: REUTERS/STATE EMERGENCY SERVICE

Ukrainian President Volodymyr Zelensky urged American legislators to do more to help his country against Russian invaders in an address before the US Congress in which he pleaded with President Joe Biden to be the world’s “leader of peace”.

“Russia has turned the Ukrainian sky into a source of death for thousands of people,” Zelensky said in his virtual address before showing a video containing  images of death and destruction in Ukraine that ended with the words “Close the sky over Ukraine”.

Zelensky continued his push for the imposition of a no-fly zone over Ukraine, and appealed for more planes and defence systems to respond to the Russian invasion launched in February that has caused large-scale destruction in his country and unleashed a wave of refugees.

Along with Nato, Biden and many US legislators resist a no-fly zone for fear of escalating conflict with nuclear-armed Russia. The White House has not supported a proposal to help transfer Russian-made MiG warplanes to Ukraine, though that idea has some support in Congress.

Zelensky’s address to Washington legislators came a day after he made a plea to Canada’s parliament for more Western sanctions on Russia and the imposition of a no-fly zone over Ukraine.

He received a standing ovation before and after his speech to US legislators. House speaker Nancy Pelosi introduced him with a chant in Ukrainian meaning “glory to Ukraine”. After his speech, Zelensky waved and put his hand on his chest in thanks for the reception.

Biden on Tuesday signed into law $13.6bn in emergency aid to Ukraine for weapons and humanitarian assistance. Biden was expected to announce an additional $800m in security assistance to Ukraine later on Wednesday, said a White House official.

Zelensky invoked past attacks on the US — in 1941 by Japanese forces at Pearl Harbor and in 2001 by Al-Qaeda militants in hijacked airliners — in depicting  Ukraine’s plight. He mentioned Mt Rushmore, the mountainside monument in South Dakota with sculpted faces of four of America’s greatest presidents.

“Right now, the destiny of our country is being decided,” Zelensky said in the speech through an interpreter. He said his country was facing a terror that Europe had not experienced since World War 2.

Zelensky suggested creating a new international institution to protect peace and respond to natural and human-caused disasters. Russia calls its invasion of Ukraine a “special operation”.

Zelensky has sought in recent weeks to build support for his country in speeches to foreign audiences, including the European and UK parliaments.

Support for Ukraine is aligning Republicans and Democrats in an otherwise  sharply divided Congress. Legislators of both parties are urging Biden to do more to help Ukraine. There is some bipartisan support in Congress for sending combat aircraft to Ukraine.

Ukrainian President Volodymyr Zelensky holds talks with premiers Petr Fiala of the Czech Republic, Janez Jansa of Slovenia, Mateusz Morawiecki of Poland, who risked a train ride to Kyiv in show of solidarity on Tuesday. How long will they stay? Here's what they discussed.

On Tuesday, the US Senate passed a resolution unanimously condemning Russia’s President Vladimir Putin as a war criminal.

Foreign leaders seldom address the US Congress in wartime, but British prime minister Winston Churchill addressed Congress in 1941 just weeks after Japan’s attack on Pearl Harbor that drew the US into World War 2. Churchill warned that “many disappointments and unpleasant surprises await us”.

After the Soviet Union broke up, Russian president Boris Yeltsin addressed Congress in 1992. He proclaimed: “We have left behind the time when America and Russia looked at each other through gunsights, ready to pull the trigger.”

Sanctions by the US and allies against Russia and moves to shore up Ukraine’s military have revived memories of the Cold War to which Yeltsin referred.