The Polish Border Guard says 1.5-million people have entered Poland from Ukraine since Russia began its invasion on February 24 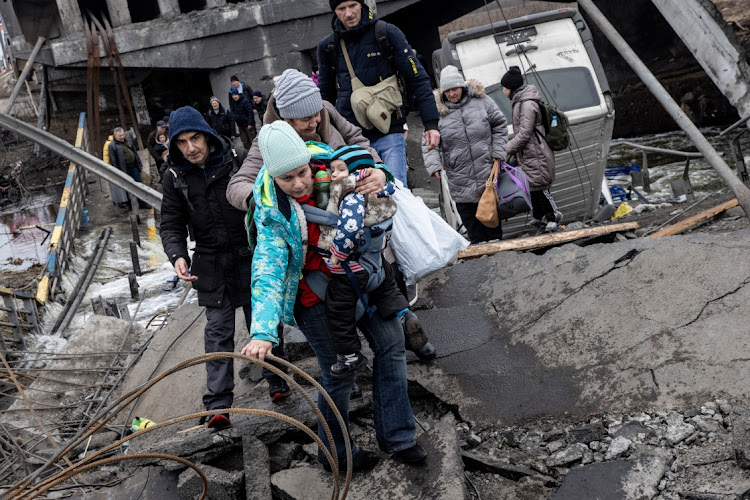 Medyk, Poland/Prague — Eastern Europe's volunteer-driven aid effort to help Ukrainians was coming under growing strain on Friday, with some cities running out of accommodation as the number of refugees passed 2.5-million and fierce fighting in Ukraine raged unabated.

Relief work in front-line states — Poland, Slovakia, Romania, Hungary and Moldova — has mainly been shouldered by ordinary citizens volunteering to drive, cook or house refugees, with the help of non-governmental organisations and local authorities.

But with the war now in its third week and the number of refugees continuing to swell, it is becoming increasingly difficult to provide sufficient help.

In Krakow, Poland's second-largest city, one nongovernmental organisation (NGO) described the situation at the city’s train station as “tragic”.

“There is nowhere to direct the refugees. They are stressed and confused, all kinds of help is needed, and above all, premises,” tweeted Fundacja Brata Alberta, an NGO that in normal times helps individuals with mental disabilities.

In Hrubieszow, a Polish town on the Ukrainian border, Mayor Marta Majewska said she had spent all the town's crisis reserve of 100,000 zlotys ($22,889), as well as 170,000 zlotys from the local province, to run a refugee reception centre.

“I am most worried about electricity bills,” she told Radio Zet. “The city cannot bear it at all.”

In Warsaw, the biggest temporary reception centre was about 70% full by Thursday. Refugees now make up over 10% of the Polish capital's population, mayor Rafal Trzaskowski said.

Close to 4,000 Ukrainian children are now attending school in Warsaw, he added, with city authorities setting up 76 “preparatory classes” in which they learn Polish.

In Przemysl, near Poland's busiest border crossing that has become a transit hub for refugees, vice-mayor Boguslaw Swiezy said he was seeing a decline in the number of volunteers, some of whom are students, others people taking time off work.

The Polish government will start reimbursing local governments' costs for handling refugees from next week, once a new law comes into force, the interior ministry said on Friday.

Romania's capital Bucharest was turning a convention centre and indoor arena, Romexpo, into its biggest refugee shelter yet, while Hungary was studying whether to turn museums, sports arenas and public buildings in Budapest into shelters.

‘I don’t know what to do next’

And the refugees just keep arriving.

Dasha, a 31-year-old psychotherapist from Kyiv, arrived on Friday at Medyka, Poland's busiest border crossing with Ukraine, where temperatures overnight dropped to -9°C.

She left Kyiv on the first day of the invasion and stayed in the western city of Lviv but has now left Ukraine on the advice of her husband, who is in the army reserve.

“It’s tough in Kyiv, they are encircling the city,” she told Reuters, with two little dogs on their leashes.

“I’m going to Wroclaw [in southwest Poland], I have some friends there,” she said before bursting into tears. “I don't know what to do next.”

“My town was bombed this morning … I just can't talk, I am so overwhelmed,” she sobbed, adding she did not know where she would spend Friday night.

The UN bases its relief plans on 4-million people fleeing abroad, but has said it may need to revise the number higher.

The Polish Border Guard said 1.5-million people had entered Poland from Ukraine since Russia began its invasion on February 24.

Russia calls its actions in Ukraine a special military operation to disarm its neighbour and dislodge its “neo-Nazi” leaders. Kyiv and its Western allies say this is a baseless pretext to invade a country of 44-million people.

By the numbers | The Russia-Ukraine military imbalance

The only countries able to get through to Moscow, oppose the invasion and sent arms or aid to Ukraine
Opinion
5 months ago
Next Article