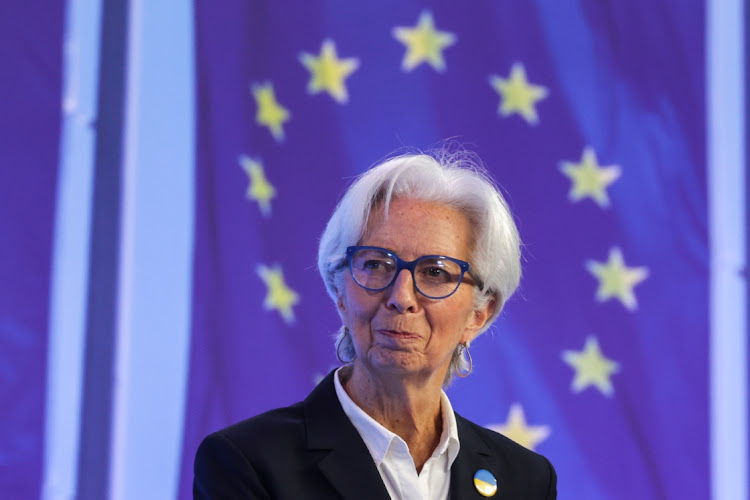 Christine Lagarde, president of the European Central Bank, during a news conference in Frankfurt, Germany, on March 10 2022. Picture: BLOOMBERG/ALEX KRAUS

The European Central Bank will end asset purchases in the third quarter, it said on Thursday, moving ahead with its exit from stimulus as soaring inflation outweighs concern about the economic consequences of Russia’s invasion of Ukraine.

With price rises in the eurozone at a record high even before Moscow began its Ukraine assault on February 24, the ECB’s more hawkish policymakers had been pushing for an early end to stimulus, paving the way for an interest rate hike this year.

While policy doves argued the war justified a pause for thought, February’s record 5.8% inflation rate and the prospect of an even higher reading in March intensified pressure on the bank to act in line with its inflation-busting mandate.

“The Russia-Ukraine war will have a material impact on economic activity and inflation through higher energy and commodity prices, the disruption of international commerce and weaker confidence,” ECB president Christine Lagarde told reporters, calling the conflict a “watershed for Europe”.

“The risks to the economic outlook have increased substantially with the Russian invasion of Ukraine and are tilted to the downside,” she said, conceding that ECB policymakers had aired differing views on what that meant.

But Lagarde said the waning effect of the coronavirus pandemic on the economy, improved labour market conditions and the prospect of an easing of supply chain bottlenecks all showed the eurozone was in fundamentally healthy shape.

The bank confirmed plans to wrap up its €1.85-trillion Pandemic Emergency Purchase Programme at the end of March and said purchases under the older and stricter Asset Purchase Programme (APP) will be smaller than previously planned.

Bond buys in the third quarter will be “data-dependent” the ECB said, but the schedule could still be revised if the inflation outlook changes.

It said any adjustments in interest rates will take place “some time” after the end of asset buys, a change from the previous formulation that purchases would end “shortly before” a rate move.

“Obviously ‘some time after’ is an open time horizon which is data dependent,” Lagarde said after being asked repeatedly what that meant for the timing of a first rate hike.

In a Reuters poll, nearly two-thirds of respondents said the APP would be shut by end-September, with nearly half saying it would be in that month.

Yet the move still came as a surprise for many investors, who expected the ECB to make as few commitments as possible, keeping options open until there is more clarity about the war.

The euro quickly firmed on the decision, seen as a modest victory for conservative policymakers, and bond yields rallied.

Ten-year German yields rose about seven basis points on the decision while the euro was trading at 1.108 versus 1.104 before the decision.

Markets now see around 43 basis points’ worth of interest rate hikes this year, up from around 30 basis points predicted before the meeting.

“All in all, today’s decisions are a good compromise, keeping maximum flexibility in a very gradual normalisation of monetary policy,” ING economist Carsten Brzeski said. “A first rate hike before the end of the year is still possible.”

UK homeless get chance at jobs in labour market squeeze

UK homeless get chance at jobs in labour market squeeze