The US and its European allies have said any attack would trigger severe sanctions against Moscow, but Ukraine wants these imposed now 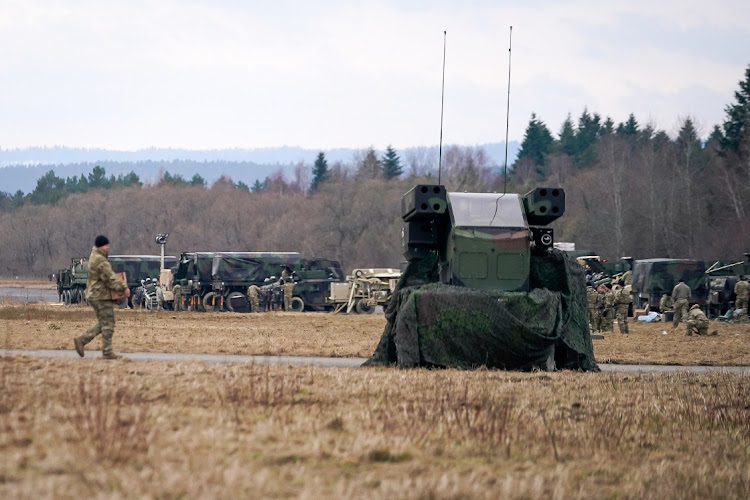 US Army soldiers assigned to the 82nd Airborne Division, deployed to Poland to reassure Nato allies and deter Russian aggression, encamp at an operating base 6km from the Ukrainian border, near Przemysl, Poland on February 21 2022. Picture: REUTERS/BRYAN WOOLSTON

Brussels — The European Union will not impose sanctions on Russia just yet, its foreign policy chief said on Monday, rebuffing a call from Kyiv to take such steps now to avert a war rather than wait until after any possible Russian invasion.

Western countries fear a build-up of Russian troops near Ukraine in recent weeks is a prelude to an invasion, which Moscow denies. The United States and its European allies have said any attack would trigger severe sanctions against Moscow, but Kyiv wants these to be imposed now.

“We believe that there are good and legitimate reasons to impose at least some of the sanctions now to demonstrate that the EU is not only talking the talk about sanctions, but is also walking the walk.”

The EU ministers backed plans announced last month for a €1.2bn financial aid loan package for Ukraine, and also agreed in principle to a long-standing Ukrainian request for a small-scale mission of military instructors to help train officers.

Lithuania’s foreign minister said the EU “should look for more than just an invasion” as the trigger for sanctions because Ukraine is already suffering economic and other impacts from the Russian military build-up on its borders.

“There are certain things that have already begun, they already carry a price, and they should warrant an answer,” Gabrielius Landsbergis told reporters in Brussels.

He also called for the EU to impose additional sanctions on Belarus for hosting Russian troops on its territory, closing loopholes Minsk uses to continue exports of oil and potash.

However, the EU’s foreign policy chief Josep Borrell, as well as some of the assembled foreign ministers, made clear the bloc did not plan to impose sanctions on Russia yet.

Borrell told reporters he would convene an extraordinary EU meeting to agree sanctions only “when the moment comes”.

For now, the EU supports the latest attempts to arrange further talks, Borrell said, after France said US President Joe Biden and Russian President Vladimir Putin had agreed in principle to a summit over Ukraine.

German foreign minister Annalena Baerbock accused Russia of playing an “irresponsible” game with the civilian population of eastern Ukraine and urged it to return to the negotiating table.

Sporadic shelling across the line dividing Ukrainian government forces and pro-Russian separatists in the east has intensified since Thursday, with Western countries saying they fear Moscow is trying to create a pretext to invade.

Kuleba, speaking after meeting his EU counterparts, welcomed the agreement to send military instructors and he said they were not combat troops.

“The details, the parameters and the timeline of this rollout are still to be discussed. But this is critical we open that new phase in our relations,” he said.

An EU diplomat said the mission would be limited in scope and would not happen very soon.

Russia and Belarus crank up pressure on Ukraine with extended drills