East-West tensions have risen since Russia massed troops near Ukraine’s border, with Western countries fearing Moscow is preparing an invasion 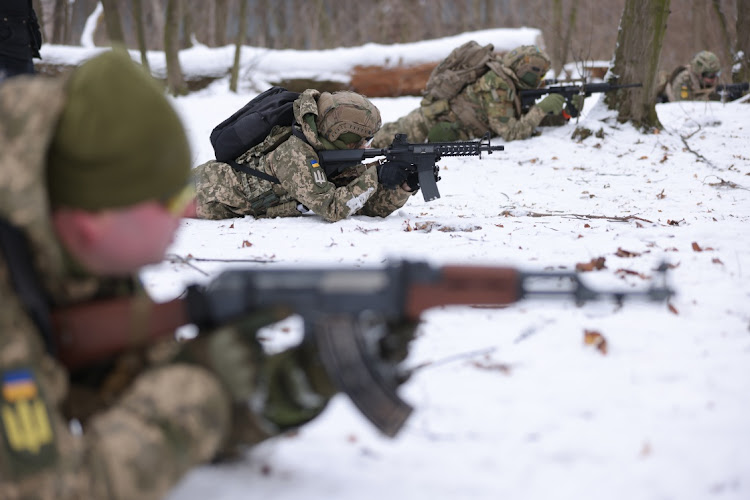 Civilian participants in a Kyiv Territorial Defence unit train on a Saturday in a forest on January 22, 2022 in Kyiv, Ukraine. Picture: SEAN GALLUP/GETTY IMAGES

Brussels — The EU is ready to impose “never-seen-before” economic sanctions on Russia if it attacks Ukraine, Denmark said on Monday, and EU foreign ministers said they would send a unified warning to Moscow.

Divergent interests in the 27-nation EU could hinder efforts to agree a joint position, and the EU is sidelined by direct Russia-US talks, but ministers said it was essential to find unity.

“Knowing Russia’s tactics, I’m sure one of their aims is to splinter the West,” Lithuanian foreign minister Gabrielius Landsbergis said as ministers gathered for regular talks in Brussels. “This is a victory we cannot afford to give to the Russians.”

Danish foreign minister Jeppe Kofod told reporters: “There’s no doubt we are ready to react with comprehensive, never-seen-before sanctions if Russia were to invade Ukraine again.”

He declined to say what sectors would be targeted.

“Russia should know, (President Vladimir) Putin should know that the price of using provocations and military forces to change borders in Europe will be very, very high... We are ready to undertake the most severe sanctions, also more severe than in 2014,” he said.

The EU, along with the US , imposed economic sanctions on Moscow targeting its energy, banking and defence sectors after Russia annexed the Crimean peninsula in 2014.

US Senate Democrats have unveiled a bill to potentially punish Russian officials, military leaders and banking institutions. The EU says it is working with Washington on a sanctions package but has given no details.

German Chancellor Olaf Scholz has urged Europe and the us to think carefully when considering sanctions.

Asked whether cutting Russia off from the SWIFT global messaging system should be an option, German foreign minister Annalena Baerbock said in Brussels the “hardest stick” may not always be the best way to deal with such a situation.

Austrian foreign minister Alexander Schallenberg said everything was on the table but also pointed to Austria’s dependency on Russia for 40% of its gas.

Asked about potential sanctions on the Nord Stream 2 pipeline from Russia to Germany, which is yet to win regulatory approval, he said sanctioning something that is not yet operative was not a credible threat.

US secretary of state Antony Blinken is expected to join the EU meeting online at about 2pm GMT.

The top US and Russian diplomats made no major breakthrough at talks on Ukraine on Friday but agreed to keep talking.

“We are here to do everything we can so that war does not break out,” Luxembourg foreign minister Jean Asselborn said.

For now, the EU does not plan to withdraw diplomats’ families from Ukraine, EU foreign policy chief Josep Borrell said after Washington announced such a move.

The British Embassy in Ukraine said some of its staff and dependants were being withdrawn from Kyiv.