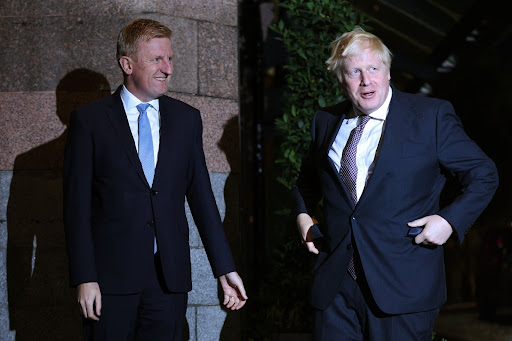 “The prime minister has degraded the office of prime minister and has lost all authority not only within his own party but with the whole country,” Starmer said on the BBC’s Sunday Show.

The chair of Johnson’s Conservative Party, though, stood by his embattled leader, saying the UK must avoid a “divisive leadership conflict” at this point to focus on ending the Covid-19 pandemic and reviving the economy.

Oliver Dowden spoke as some Tory MPs call for Johnson to step down after a string of damaging reports about Downing Street happy hours that enraged many rank-and-file Conservatives.  The events included ones held in April 2021, the evening before Queen Elizabeth attended the funeral of her husband Prince Philip and, because of prevailing coronavirus restrictions, sat alone.

On Sky News, Dowden said Johnson deserved to stay on after making the “right call” on the nation’s Covid-19 vaccine booster programme, but also needed to make a commitment to changing the culture on Downing Street.

“It’s essential we should address the kind of failings that allowed this to happen,” Dowden said on Trevor Phillips on Sunday of the happy hours held while the UK was under lockdown. “He is committed to upping our game.”

Almost three dozen Tory MPs support a no-confidence vote in Johnson, the Sunday Times reported, citing a senior government source it did not identify. That is still well short of the 54 that would be required to trigger a vote on the prime minister’s leadership.

Only a handful have publicly called for Johnson to quit, though. One Conservative speaking up was Tim Loughton, who called Johnson’s position untenable in a statement posted on Facebook.

“Most people have expressed genuinely held views and have been deeply troubled, angered or appalled by recent events involving Number 10,” Loughton said. “That includes people who have previously been great supporters of Boris Johnson as well as Conservative Party members.”

Another Conservative MP, Tobias Ellwood, told the Telegraph that among his constituents emailing about the reports were “many party members saying: ‘I’m simply shocked by this’.”

With his back to the wall, the Times reported that Johnson is considering staff changes and also plans to soon announce a range of measures, from banning alcohol at his office to setting plans to help the National Health Service end its years-long backlog of patients.

Most immediately, he is expected to soon lift most or all of England’s “plan B” coronavirus measures by January 26, as cases tumble to a one-month low and hospital admissions stabilise.

Opinion polls have shown Johnson’s Conservative Party shedding support in the traditionally Labour-voting districts in northern England that the Tories flipped in the last election. Nationally, Labour now holds its biggest lead over the Conservatives since 2013, according to an Opinium poll taken for the Observer.

A weaker Johnson is likely to mean more factionalism, and that might be a good thing for Britain’s democracy or it might lead to gridlock
Opinion
5 months ago