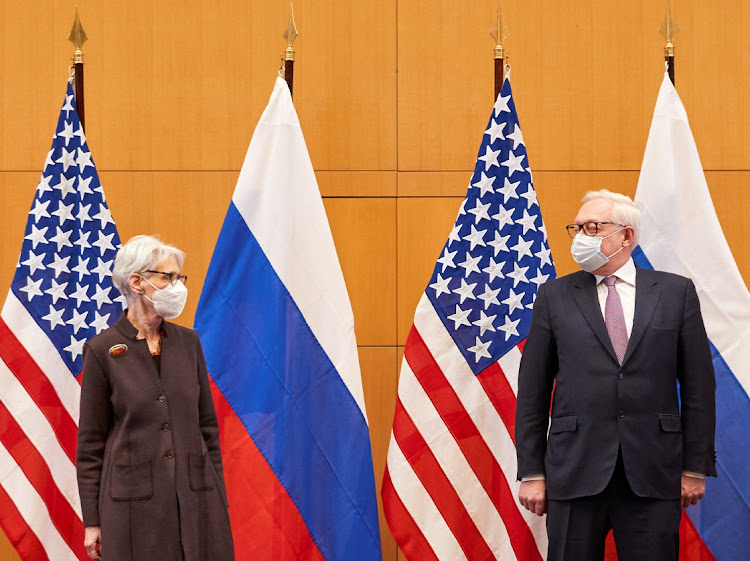 Geneva — Russia and the US gave no sign that they had narrowed their differences on Ukraine and wider European security in talks in Geneva on Monday, as Moscow repeated demands that Washington says it cannot accept.

Russia has massed troops near Ukraine's border while demanding that the US-led Nato alliance rule out admitting the former Soviet state or expanding further into what Moscow sees as its back yard.

“Unfortunately we have a great disparity in our principled approaches to this. The US and Russia in some ways have opposite views on what needs to be done,” Russian deputy foreign minister Sergei Ryabkov told reporters.

Deputy US secretary of state Wendy Sherman said: “We were firm ... in pushing back on security proposals that are simply non-starters to the US.”

Washington and Kyiv say 100,000 Russian troops moved to within striking distance of Ukraine could be preparing a new invasion, eight years after Russia seized the Crimean peninsula from its neighbour.

Russia denies any such plans and says it is responding to what it calls aggressive behaviour from Nato and Ukraine, which has tilted towards the West and aspires to join the alliance.

Ryabkov repeated a set of sweeping demands including a ban on further Nato expansion and an end to the alliance's activity in the central and eastern European countries that joined it after 1997.

“We underscore that for us it’s absolutely mandatory to make sure that Ukraine never, never, ever becomes a member of Nato,” he said.

“We do not trust the other side, so to say. We need ironclad, waterproof, bulletproof, legally binding guarantees. Not assurances, not safeguards, guarantees with all the words 'shall, must', everything that should be put in, 'never ever becoming a member of Nato'. It’s a matter of Russia’s national security.”

Sherman said: “We will not allow anyone to slam closed Nato’s open-door policy, which has always been central to the defence alliance.

“We will not forgo bilateral co-operation with sovereign states that wish to work with the US, and we will not make decisions about Ukraine without Ukraine, about Europe without Europe, or about Nato without Nato.”

The build-up of troops near Ukraine, has raised US-Russia tensions to their highest levels since the end of the Cold War.

Both sides said Russia had stated that it did not intend to invade, something that Ryabkov said could never happen, but Sherman said she did not know if Russia was willing to de-escalate.

The Russian complained that the US side did not show an understanding of the urgency of the situation. While there was no deadline, Russia was not prepared to wait weeks or months, he said.

Ryabkov said Russia needed to see movement by Nato, and failure to provide that would be a mistake that would damage Nato’s own security.

Russia would respond in a “military-technical” way if talks broke down, he said — a possible reference to redeploying intermediate-range nuclear (INF) missiles in Europe, which he said last month could happen if the West declined to respond.

Sherman said no country could change the borders of another by force, calling on Russia to reduce the tension by returning its troops to barracks.

If it walked away, she said, it would be clear it was never serious about diplomacy.

Sherman said the US was interested in talking about a possible deal on INF missiles along the lines of the now-defunct INF treaty between the US and Russia.

She said the US side was also willing to engage with Russia’s proposal to set limits on the size and scope of military exercises.

The US formally withdrew from the landmark 1987 INF pact with Russia in August 2019 after determining that Moscow was violating the treaty, an accusation the Kremlin has denied.

The treaty, negotiated by then-US president Ronald Reagan and Soviet leader Mikhail Gorbachev, banned land-based missiles with a range of between 500km and 5,500km.

Despite the lack of obvious progress, the atmosphere between the two sides appeared cordial.

Sherman called it a frank and forthright discussion, while Ryabkov said it was difficult but professional and that the US had approached the Russian proposals seriously.

He said Russia would decide on the prospects for progress after further meetings with Nato members in Brussels on Wednesday and with the Organisation for Security and Co-operation in Europe in Vienna on Thursday.