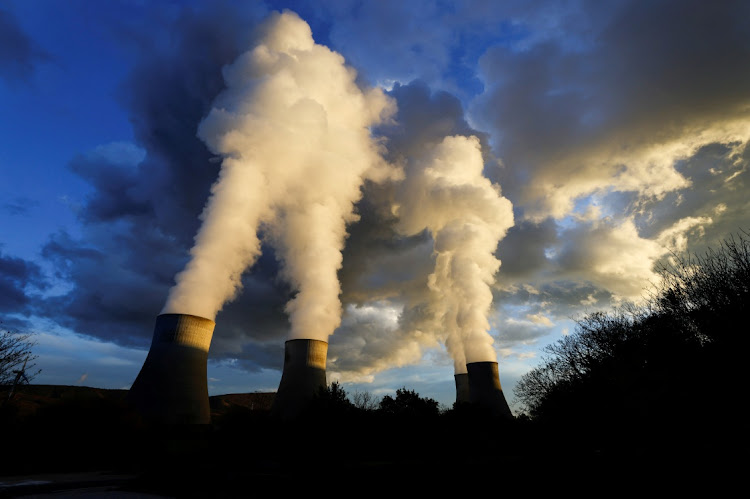 Europe could face a grim winter as nuclear outages in France put the continent’s energy market near breaking point, raising the risk of rolling blackouts in the coldest months of the year.

Electricite de France is halting reactors accounting for 10% of the nation’s nuclear capacity, worsening Europe’s energy shortages and leaving the continent at the mercy of the weather at the height of winter in January and February. Even before the outages, a shortage of natural gas had already forced Europe to rely on burning coal to keep the lights on.

“Europe will have a lot of problems if it gets cold,” said Emeric de Vigan, CEO of energy analysis firm COR-e. “Now it would only take 2°C-3°C below the seasonal normal to get into trouble.”

The French nuclear fleet is a crucial round-the-clock source of power not just nationally but at peak times in markets such as Germany, Italy and Britain. Plant availability was already low as the pandemic delayed works on some reactors, and now EDF is halting two units and extending stoppages at two others after discovering a fault at a plant during regular maintenance. 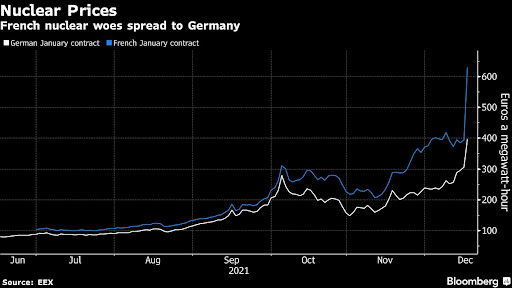 Without these units, about a third of France’s nuclear fleet will be halted at the start of January, forcing the nation, which typically exports electricity, to import more supplies at peak times from neighbouring markets. The crunch will mean Europe — already faced with shortages of natural gas — has to burn more coal, and even oil in places such as Germany and Sweden, another obstacle for policymakers trying to curb carbon emissions.

Europe’s energy crunch could still get worse. An escalation of the tensions between Kyiv and Moscow could lead to further disruptions, with the potential for Russian gas shipments to be curbed or halted altogether in the case of an invasion. Conflict could also further delay the start of the controversial Nord Stream 2 pipeline linking Russia to Germany, which has already suffered repeated delays. Tom Marzec-Manser, an analyst for European gas and LNG at ICIS, said Europe faces tough choices ahead.

The price of power for delivery in January in France soared 60% to a record €630 a megawatt-hour on the European Energy Exchange. In Germany, the equivalent contract surged 25% to an all-time high of €38/MWh.

France may need to stop exports to Britain and Italy, according to Jean-Paul Harreman, an analyst at energy consultant Enappsys. If that happens, it will push up prices in the core markets across the continent.

The French grid operator had already said vigilance would be needed at the beginning of the year in the event of a cold snap. To cope with supply shortages, RTE increased contracts that allow it to briefly cut power of some large manufacturers. After that, it can reduce the voltage on the grid, and then use rotating regional power cuts of less than two hours as a last resort.

“I can see grid managers paying industrial companies to not run if it gets really cold in a short period, they have done so in the past and they can do it again,” De Vigan said.

Before this latest blow, markets were already under severe strain. Gas prices that are more than six times higher than usual have pushed up the cost of generating electricity, and Europe’s wide network of renewable energy sources has not been able to fill the gap due to low wind speeds. High energy prices risk further industrial shutdowns, halts to cross-border power flows and even full on blackouts.

Lobby group wants €800m to build capacity, but critics see the plan as the fossil industry’s attempt to ensure its survival
World
5 months ago

Swiss Re, Munich Re, Hannover Re and others have tightened underwriting and investment policies but they fall short of activists’ demands
Companies
5 months ago
Next Article