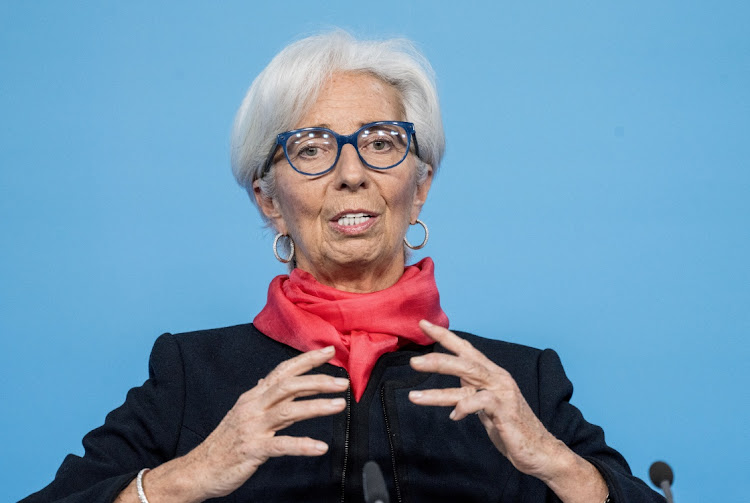 The European Central Bank (ECB) temporarily boosted regular monthly bond buying for half a year to smooth the exit from pandemic stimulus as president Christine Lagarde unveiled forecasts showing a strong economic rebound along with an outlook for faster inflation.

In a statement that acknowledged the developing threat of the Omicron variant, the ECB pledged to briefly double asset purchases to cushion the end of its €1.85-trillion emergency programme in March to avoid what Lagarde called “a brutal transition”. Officials will also revamp that crisis tool to combat future market turmoil.

“The progress of economic recovery permits step-by-step reduction in [the] pace of asset purchases over coming quarters,” Lagarde told reporters during a virtual media conference in Frankfurt on Thursday. “Inflation is expected to remain elevated in the near term but should ease in the course of next year.”

The so-called asset purchase programme will double to €40bn a month, starting in the second quarter, tapering to €30bn before returning to the existing pace of €20bn in October. ECB officials also changed reinvestment rules around the pandemic emergency purchase programme (PEPP), making it easier to deploy support in the event of market jitters. Greece, which is excluded from regular bond purchases because of its low credit rating, may receive extra support under the plan. 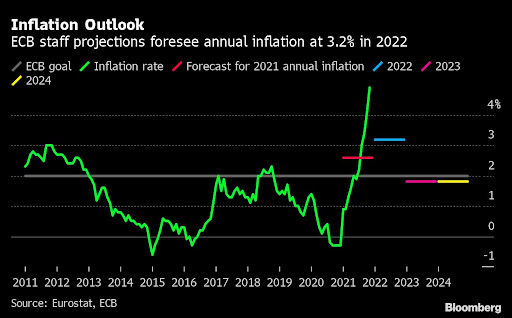 The decision is an acknowledgment that emergency policy settings must come to an end in the face of the euro area’s fastest inflation since the single currency was created and as economic output nears pre-crisis levels. The move also takes into account the heightened uncertainty triggered by the resurgent pandemic, which has halted economic growth in Germany.

The ECB president unveiled updated macroeconomic forecasts that project inflation above the ECB’s 2% goal for most of 2022, averaging 3.2%. Officials then see price growth below the target in 2023 and 2024, at 1.8% in each year. Lagarde said much of the surge is driven by high energy prices and constrained supply, which should pass eventually.

Policymakers said they can reactivate the pandemic tool if needed to combat the sort of crisis whose eruption in the eurozone in 2020 forced them to create it in the first place.

“In the event of renewed market fragmentation related to the pandemic, PEPP reinvestments can be adjusted flexibly across time, asset classes and jurisdictions at any time,” the ECB said in a statement. “Net purchases under the PEPP could also be resumed, if necessary, to counter negative shocks related to the pandemic.”

Italian bonds led declines in the region, lifting the 10-year yield eight basis points to 1% and widening the premium over bunds by four basis points to 131. German yields also climbed, led by the long end where 30-year rates rose above 0% for the first time since November. Money markets kept bets on a first 10-basis-point rate hike by the end of 2022.

The ECB’s announcement follows Wednesday’s decision by the US Federal Reserve to double the pace at which it tapers its own stimulus as it grapples with the biggest surge in consumer prices in three decades. The Bank of England was even more proactive on Thursday, unexpectedly becoming the first Group of Seven central bank to raise interest rates since the pandemic struck.

Unlike the Fed, the ECB hasn’t so far abandoned its insistence that elevated price gains are transitory — driven by supply jams and soaring energy costs that will fade in 2022. Backing that view, IHS Markit said German inflation “might have peaked” as its latest gauge of activity showed Europe’s biggest economy stagnating in December.

“Monetary accommodation is still needed for inflation to stabilise at the 2% inflation target over the medium term,” the ECB said.