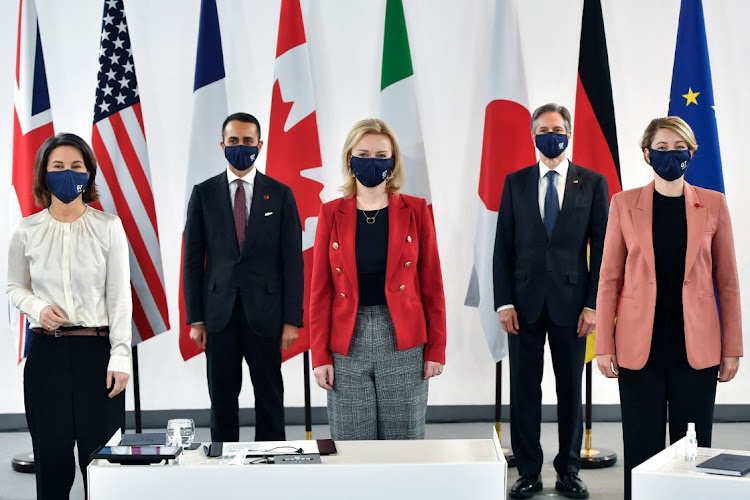 Liverpool — The G7  states will warn Russia  of “massive consequences” if President Vladimir Putin attacks Ukraine, according to a draft statement on Sunday.

At a summit in Liverpool, England, G7 delegates said they were united in their condemnation of Russia’s military build-up near Ukraine and they called on Moscow to de-escalate.

“Russia should be in no doubt that further military aggression against Ukraine would have massive consequences and severe cost,” the draft statement said, confirmed by G7 sources

British foreign secretary Liz Truss had billed the G7 meetings as a show of strength from democracies against “aggressors who seek to undermine liberty”.

There was a “very much a united voice from the G7 nations who represent 50% of global GDP, being very clear that there will be massive consequences for Russia in the case of an incursion into Ukraine”, Truss said on Sunday in Liverpool.

Ukraine is at the centre of a crisis in East-West relations as it accuses Russia of massing tens of thousands of troops in preparation for a possible large-scale military offensive.

Russia denies planning any attack and accuses Ukraine and the US of destabilising behaviour, and has said it needs security guarantees for its own protection.

The G7 comprises Britain, France, Germany, Italy, Japan, Canada and the US, and includes a representative from the EU.

Bloomberg reports Russia’s deployment of troops and military equipment on Ukraine’s border have pushed revived fears of war to the top of the G7’s agenda.

US intelligence has suggested the Kremlin has prepared a plan for an offensive against Ukraine as soon as early 2022 with as many as 175,000 personnel.

President Joe Biden on Saturday warned Russia of “devastating” economic penalties if it attacks Ukraine and said more US and Nato troops would be sent to defend allies.

US secretary of state Antony Blinken and Italian foreign minister Luigi di Maio, who met on the margins of the G7 conference, renewed their support for Ukraine’s sovereignty and called on Russia to “reduce tensions and return to diplomacy”, the state department said.

Ministers also discussed China’s challenge to Western democracies, including what the official described as predatory trade practices towards Europe. To the extent that China has antagonised European countries, it’s a result of its own behaviour, an official said.    With Bloomberg

While a Russian invasion is unlikely, Ukraine, Europe and the US must guard against complacency
Opinion
5 months ago