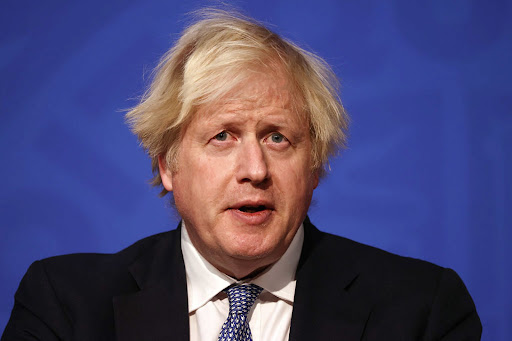 Boris Johnson, engulfed by a string of crises that have angered Tory legislators, could face more ire over a report that he personally breached Covid-19 lockdown rules a year ago.

The Mirror reported on Saturday night that the UK prime minister hosted a Christmas quiz from his Downing Street residence on December 15, when London was under a “no mixing” order.

The news came as two opinion polls show Johnson’s Conservatives falling behind the Labour Party, with a majority of respondents in one survey saying Johnson should resign.

In the Mirror report the prime minister was pictured on screen with at least two aides as he read out questions to staff, who participated via computer from their offices at No 10 in teams of up to six people.

London at the time was under regulations that banned social mixing between households. Christmas work gatherings were prohibited.

The Mirror reported that staff had been invited weeks earlier to participate in a virtual quiz to raise money for charity.

“It’s a virtual, Zoom call,” Zahawi said of the quiz. “Not anything else. I think the nation will understand that.”

“This was a virtual quiz. Downing Street staff were often required to be in the office to work on the pandemic response, so those who were in the office for work may have attended virtually from their desks,” a spokesperson for No 10 said on Sunday. “The prime minister briefly took part virtually in a quiz to thank staff for their hard work throughout the year.”

Conservative MP Steve Baker, though, told Sky it was critical the country’s leaders, from Johnson down, comply with the spirit of regulations, not just the letter.

“It’s pretty obvious now that that hasn’t happened and that is a very bad position to be in,” Baker said.

Johnson’s popularity has slumped in recent weeks after the botched handling of an ethics probe and as the government proposed harsh new “Plan B” restrictions to thwart a new surge in Covid-19 cases as well as the fast-spreading Omicron variant.

Labour raced to a six-point lead over Johnson’s Conservative Party in a Savanta ComRes poll for the Daily Mail taken on December 9-10, a nine-point swing from December 3-5.

A second survey, conducted for the Observer by Opinium, put Labour up by nine points, and showed that 57% of voters say Johnson should resign, up nine points from two weeks ago. Johnson’s approval rating was at -35%, down from -21% two weeks ago.

Parliament is expected to vote this week on the latest restrictions and Johnson could face a rebellion of about 60 Tory legislators, according to people who spoke on condition of anonymity.

The question of whether the string of controversies marks the beginning of the end for Johnson is now being openly debated, even in Tory-friendly papers.

Last week Johnson faced allegations that a Christmas party was held at Downing Street in 2020 that breached Covid-19 restrictions at the height of the pandemic. Video was also leaked showing his staff making light of Covid-19 measures.

The prime minister has said so far that he was not involved in social gatherings at his residence last Christmas. In parliament last week, Johnson said he was “repeatedly assured” that no Covid-19 rules were broken.

Doyle is the latest senior aide named in the saga over a gathering on December 18 2020, after Johnson’s former spokesperson, Allegra Stratton, quit ...
News
6 months ago

The problem with the 10 Downing Street Christmas party last year that the prime minister won’t confirm is that it leaves the impression that those ...
Opinion
6 months ago

A modest cutting back on socialising would be good for retail. If Brits choose to stay home rather than eat out that means more pigs-in-blankets and ...
Opinion
6 months ago