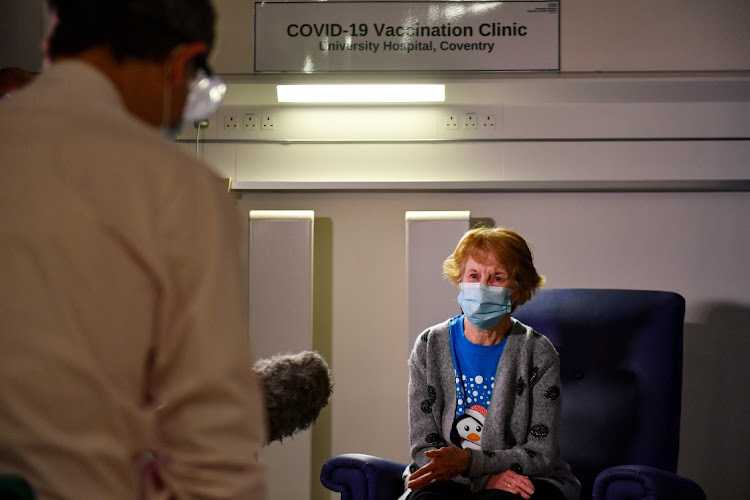 Margaret Keenan speaks to the media after becoming the first person in the UK to receive the Covid-19 vaccine, at University Hospital in Coventry in December 2020. Picture: PA WIRE/BLOOMBERG/JACOB KING

London  — The first person in the world to be given a fully tested Covid-19 vaccine, 91-year-old Briton Margaret Keenan, urged people on Wednesday to get vaccinated, one year on from her shot.

Keenan described receiving the Pfizer-BioNTech Covid-19 vaccine on December 8 2020 as the “best thing that has ever happened”.

“It was wonderful. I cannot believe it now, what happened at the time... I'm so happy I got the jab,” Keenan, known to friends as Maggie, said in a broadcast clip to mark the anniversary. “I encourage everyone to have it.”

Prime Minister Boris Johnson has highlighted Britain’s early success in rolling out Covid-19 vaccines and said it was why he was able to reopen England’s economy in July.

He is now urging officials to scale up the country’s booster programme to a similar level as the initial rollout in light of concern over the new Omicron variant, which has also seen him reintroduce some mask mandates and travel restrictions.

“Vaccines remain our first and best line of defence against the virus,” Johnson said.

Britain has now given nearly 120-million doses of Covid-19 vaccine to its population of 67-million, either as first doses, second doses or as boosters.

Scientists are concerned that Omicron might be more transmissible than the dominant Delta variant and have mutations associated with lower vaccine effectiveness.

Health secretary Sajid Javid has encouraged boosters even if shots are less effective against Omicron than previous variants.

May Parsons, the nurse who vaccinated Keenan, said a lot of people now seriously ill in her Covid-19 wards are unvaccinated. “If you’re unvaccinated, there is still a chance (to get a shot)," Parsons said. “It's not too late.”

Glaxo’s treatment stands up to all mutations in the spike protein of the Omicron variant and not just the key mutations, Glaxo says
News
1 month ago