Galicia’s fisherwomen won’t clam up about this chilly job 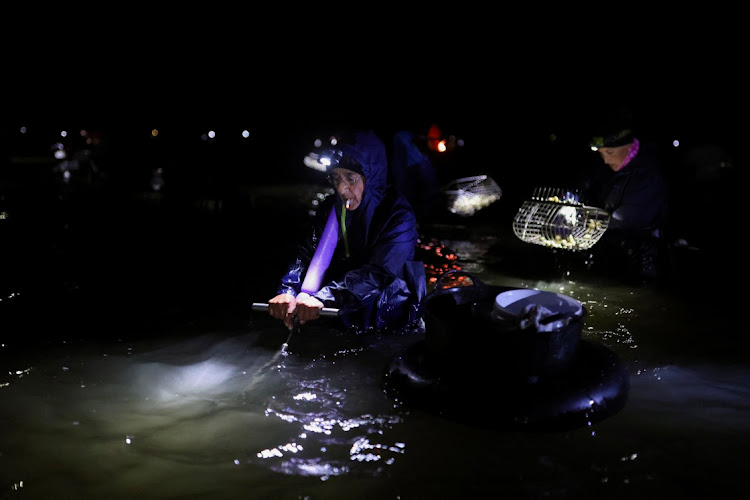 Shellfisherwomen use rakes as they collect clams in the Noia estuary in Galicia, Spain on November 15 2021. Some 4000 women work on foot along the inlets in the region. Picture: REUTERS/NACHO DOCE

Noia, Spain — Just before dawn breaks over the Noia estuary in Spain’s Galicia region, hundreds of women descend by torchlight into the waist-deep waters to gather cockles and clams from the riverbed using techniques that have been passed down through generations.

Wearing windproof jackets over their wetsuits, they dredge up shellfish from the nutrient-rich silt of Galicia’s chilly Atlantic estuaries — known as Rias — using nothing more than long-handled rakes attached to metal baskets.

About 4,000 people, almost all women, work as traditional shell fishers in the inlets that criss-cross the region’s rugged coastline, earning up to €2,000 a month for the six-month season, but for many it is more than a job.

“This work is freedom. You’re like a seagull, you’re free,” said 58-year old Conchita. “It’s always called to me ever since I was a little girl,” she said, reminiscing how she used to skip school to watch boats unloading on the quay.

Mari Carmen Rosende Mayo, 65, who is reluctantly preparing to retire at the end of December after 31 years, feels the same. “When I walk by the sea I forget all my problems. I relax and I have no cares,” she said.

Under the light of her headtorch she deftly picks out the best cockles from her basket and places them in a bucket floating on a rubber ring tethered to her by a short cord.

To ensure the sustainability of shellfish stocks, only licensed fisherwomen can participate and the season is limited to October to March. The practice is strictly regulated by an EU-funded project that promotes the sustainable management of cockles in six Atlantic coastal communities, including Galicia.

At the end of the day each woman’s catch, which cannot exceed a 3kg quota of clams or 16kg of cockles, is weighed and processed before being shipped off.

Mayo has seen perceptions of her work change over time. “They used to say, ‘What’s your job? Are you a fisherwoman? Yuck!’ ... Now many would like to be shell fishers.”

Alida Elena, 35, is one of a new generation of women learning the ropes. “Working at sea infatuates you. As soon as the day is over I can’t wait for the next day to come,” she said.

Back on shore, Mayo gives her tips about areas to avoid and reminisces about having to be rescued once from a nearby estuary when the tide began to rise suddenly. “Apart from that, my experience has been very good, very, very good. It’s beautiful.”