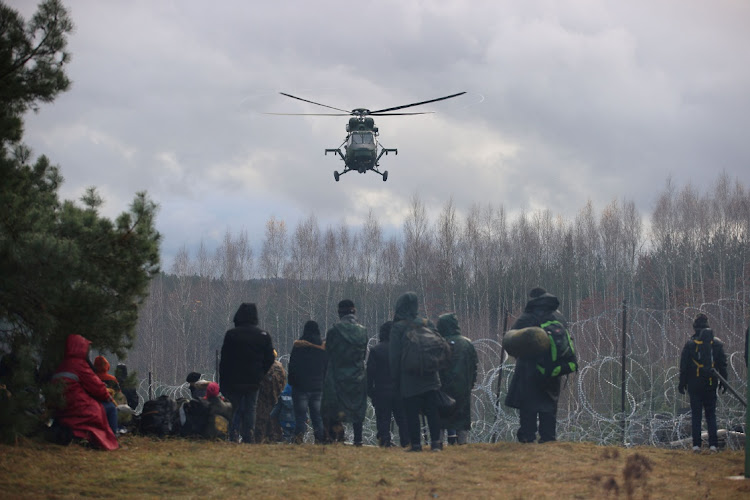 A helicopter hovers above migrants on the Poland-Belarus border. Picture: REUTERS/LEONID SCHEGLOV/BELTA

Kiev — Facebook’s parent company, Meta, has linked the Belarusian KGB to the setting up of dozens of fake social media accounts of people posing as journalists and activists to stir up a migrant crisis on the border of Belarus and Poland.

The fake profiles were used to criticise the behaviour of the Polish authorities, including spreading allegations that Polish border guards were using force and intimidation against migrants, it said.

“These fictitious personas posted criticism of Poland in English, Polish and Kurdish, including pictures and videos about Polish border guards allegedly violating migrants’ rights, and compared Poland’s treatment of migrants [with that of] other countries,” the report said.

“Although the people behind it attempted to conceal their identities and co-ordination, our investigation found links to the Belarusian KGB,” it said.

The Belarusian KGB could not be reached for comment.

Facebook has been under global pressure from regulators, legislators and employees to combat abuses on its services. It told Reuters in September that it is being more aggressive in shutting down  co-ordinated groups of real-user accounts engaging in certain harmful activities on its platform, including attempts to influence elections in countries.

EU countries have accused Belarus of creating a migrant crisis on the bloc’s eastern borders by encouraging thousands from the Middle East and Africa to try to cross into Poland and Lithuania, in revenge for Western sanctions on Minsk.

Belarusian President Alexander Lukashenko denies doing so and pinned the blame for the crisis on the EU.

Rights groups say at least 13 people have died as migrants have camped in freezing conditions at the border. The three EU countries that border Belarus have defended their approach of pushing migrants back without individually assessing their cases or granting them a realistic chance to claim asylum as guaranteed under international humanitarian law.

The Meta report said the company separately removed 31 Facebook accounts, four groups and four Instagram accounts that are believed to have originated in Poland and targeted an audience in Belarus and Iraq.

The report did not link the accounts to the Polish state but said they were intended to discourage migrants from trying to get into the EU.

“These fake personas claimed to be sharing their own negative experiences of trying to get from Belarus to Poland and posted about migrants’ difficult lives in Europe,” it said. “They also posted about Poland’s strict antimigrant policies and antimigrant neo-Nazi activity in Poland.”

As the US and Britain issue warnings, Moscow defends its right to deploy troops on its territory as it wishes
World
8 months ago

Ukraine says Russia may be planning to invade, while Moscow claims its exercises are in response to Nato activit
World
8 months ago

Germany says no to call by Belarus to take in 2,000 refugees

Belarus began moving more than 1,000 migrants to a warehouse near the Kuznica border crossing on Wednesday, away from makeshift camps along the border
World
8 months ago
Next Article