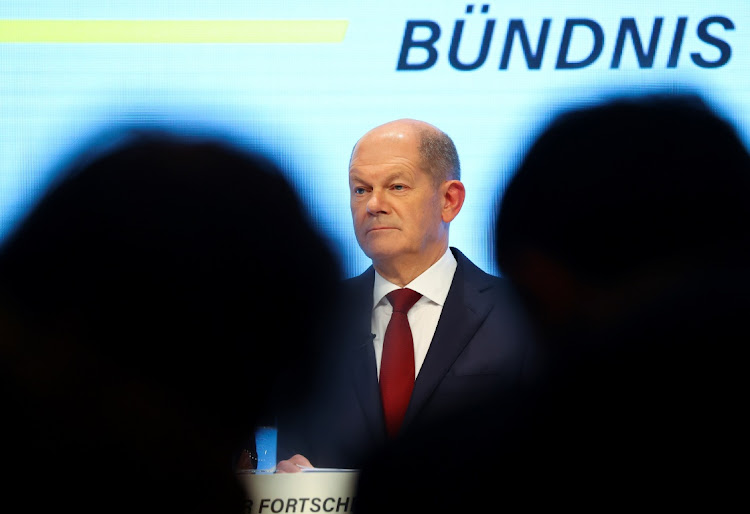 Olaf Scholz delivers a statement after a final round of coalition talks to form a new government in Berlin, Germany on November 24 2021. Picture: REUTERS/FABRIZIO BENSCH

Berlin — German Social Democrat Olaf Scholz said on Wednesday he had reached a deal with the Free Democrats and Greens to form a coalition government that will bring the curtain down on the Angela Merkel era.

According to 177-page agreement struck after two months of talks, the three parties want to accelerate public investment in green technology and digitalisation while returning to strict debt limits from 2023.

The deal will install Germany’s first federal coalition between the Social Democrats (SPD), libertarian Free Democrats (FDP) and the ecologist Greens, and end 16 years of Merkel-led conservative government under the Christian Democratic Union, marking a new era for relations with Europe and the rest of the world.

“We want to dare to make more progress,” Scholz said at a news conference in Berlin, flanked by the FDP and Greens leaders. “We will massively invest in Germany to keep it at the forefront.”

Merkel leaves big shoes to fill. She has navigated Germany and Europe through multiple crises and been a champion of liberal democracy in the face of rising authoritarianism worldwide.

Her critics say she has managed rather than solved problems and leaves her successor tough decisions on many fronts.

The alliance — dubbed a traffic-light coalition after the three parties’  colours — has a majority in the lower house of parliament and expects the government will be sworn in early next month after the parties ratify the coalition pact.

It faces immediate challenges, with Germany tackling its worst Covid-19 surge yet and Europe grappling with the fallout from Brexit and a crisis on the EU’s border with Belarus.