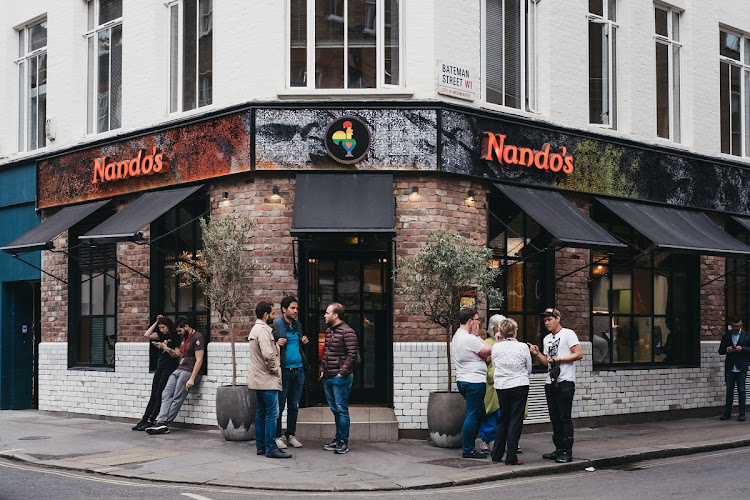 Gateshead, England — Being a successful entrepreneur is not always about being in the right place at the right time.

But while the pandemic could not have been foreseen, the centre’s unlikely location — in an old warehouse complex in a deprived area of the northeastern city of Gateshead — was carefully considered.

“We could have had a shiny office in Manchester or Birmingham within the gay scene ... but actually, we found an old building, we did it up and we flew the [LGBT+] progressive flag and that’s made an incredible impact,” Darrant-Parkes said.

With the British government focused on tackling regional inequality as the economy rebounds from 2020’s deep recession, officials said the Pride Media Centre could provide a model for initiatives elsewhere in the country.

“We’re in, by acknowledgment of the management team here, a very deprived area of the northeast, but I get the sense they’ve sprayed some magic in this part of the world,” said Britain's first LGBTI Business Champion, Iain Anderson.

“If this model could be replicated across the country, that really would be quite fantastic,” Anderson, who cofounded the communications agency Cicero in 2001, told the Thomson Reuters Foundation during a recent visit to the business centre.

With a focus on the media industry, the centre comprises studios for radio and television, but also houses PR firms and marketing companies alongside charities and the owners of the local pub. It is now home to a total of 32 businesses.

Smaller companies can be a motor for growth, particularly in regions such as the northeast that previously relied on fast-disappearing manufacturing jobs, said John Adams, a councillor in Gateshead.

“[It’s about] small businesses coming together, providing a sort of knowledge-rich, innovation-type location for people to work together, learn from each other and make sure that they're all getting commercial advantage from it all,” Adams said.

Until recently, LGBT+ centres were community-led, focusing on helplines and offering support and security to lesbian, gay, bisexual and transgender people.

But from Gateshead to Australia, there has been a shift towards supporting LGBT+ businesses and entrepreneurs.

In July, the Victorian Pride Centre opened in Australia’s second-largest city, Melbourne, as “a hub for LGBTIQ+ groups and organisations to share ideas and resources”, its website says.

Darrant-Parkes said research his team conducted in 2018 suggested there were only four centres in the world that specifically focused on LGBT+ business and media.

Now, however, at least two more are planned to open in Britain over the next year in Kirkcaldy and Perth, both in Scotland.

“Instead of launching a new product or their own business from their spare bedroom, we want to give them a really focused business space,” said Stuart Duffy, founder of LGBT+ community organisation Pink Saltire, which is backing both ventures.

“So as well as having coffee and meeting rooms and facilities for the community, we’re also going to have an enterprise space to help foster people into work or to start thinking about their own enterprise,” Duffy added.

The 1980s and 1990s saw the emergence of what came to be called the “pink pound” — or the spending power of the LGBT+ community — as growing LGBT+ equality in Britain brought marketing opportunities for consumers and companies.

In 1984, the Guardian newspaper ran a feature headlined “Chasing the pink pound,” widely believed to be the first use of the term.

Since then, the LGBT+ community’s economic clout has been gaining recognition around the world.

A 2018 study conducted by Kantar Consulting and LGBT+ social network Hornet estimated the community’s buying power in the US alone at $1-trillion in 2016 — almost equal to that of African-American or Hispanic consumers.

There can be broader benefits for businesses that court LGBT+ customers, too, said Rachel Allison, founder of Axe & Saw, a communications consultancy specialising in diversity and inclusion.

She cited the example of furniture retailer Ikea, which ran the first advert featuring a gay couple in 1994.

“Despite cries to boycott the brand, Ikea has benefited by 10-fold,” Allison said. “[It is] now firmly positioned as a brand that is inclusive and relevant for future generations and thinkers.”

A study by two Finnish universities, which analysed the financial performance of 657 stock market-listed US companies between 2003 and 2016, found that “LGBTI-friendly” firms were both more profitable and were worth more.

The same holds true at the local level, according to Niamh Corcoran, policy adviser at the North East England Chamber of Commerce, who said the Pride Media Centre had helped make Gateshead “a more dynamic and inclusive place to do business”.

Councillor Adams said business centres — LGBT+ or otherwise — were crucial in helping former manufacturing hubs switch to a more service-led economy and bring long-term unemployed people back into the workforce.

“One of the things [the Pride Media Centre has] done … is matching people who are some distance from the labour market with the opportunities that are created at the centre,” he said.

At the business centre, also home to a “streaming studio” popular with YouTubers, Darrant-Parkes said Britain had moved on from the days when non-LGBT+ people would either not work for or shop at a gay business for fear of being presumed to be gay themselves.

“I’d say 60% of our tenants are allies [of the LGBT+ community]. They've seen that [the Pride Media Centre] is a great place to do business. It’s a safe place, a fun place; they're inspired by it.

“And if they can see a better turnover, then that’s a great world to live in.”

Members of Prime Minister Yoshihide Suga’s conservative ruling party, including the gender equality minister, have backed the law, which they say ...
World
1 year ago
Next Article