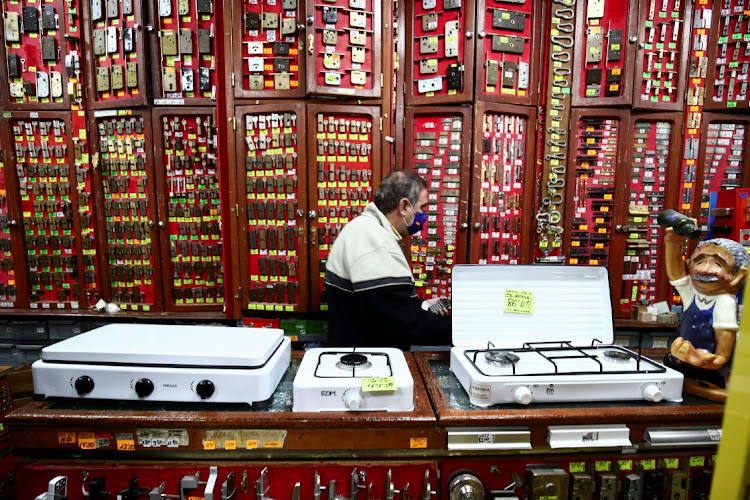 An employee walks past gas cookers displayed for sale at a hardware store in Madrid, Spain, November 8 2021. Picture: REUTERS/SERGIO PEREZ

Madrid — Camping gear such as gas cookers and lanterns are flying off the shelves of hardware stores in Spain as people fearing energy shortages and potential blackouts prepare for the winter.

Despite government assurances that there will be no supply crunch, a surge in electricity prices has fuelled the public’s concerns. The surge has partly been driven by shortages in Asia and Europe, and a switch in pipelines bringing gas from Algeria.

Shoppers told Reuters they are seeking alternatives to their grid-based appliances in case these turn out to be too costly in a supply crisis or stop working with a blackout.

Beatriz Gordillo, a concierge in a central Madrid apartment block, told Reuters she has already bought a battery-powered lamp and candles, and she is considering whether to buy a portable butane gas cooker too.

“I live in the basement and if the lights go out it’s going to be terribly cold,” she said. “I’m nervous. I don’t know what I’m going to do. The price [of the cooker] is a lot for me.”

Shoppers also referenced a campaign by the Austrian government to educate citizens about products to keep at home in the event of blackouts.

Hardware stores in Madrid have put oil lamps and butane gas heaters in their shop fronts, despite the government and energy companies insisting citizens have nothing to fear.

“We absolutely guarantee quality electricity and gas supply and that should serve to calm people who might be worried by rumours,” environment & energy minister Teresa Ribera said at a public event last week.

Joan Batalla, the Spanish Gas Association’s president, told Reuters he is aware of anxiety around supply but Spain has a more diversified gas portfolio than most European countries, with supply from 14 countries.

However, some Spaniards are taking no chances.

“We don’t know where it’s coming from, but the demand is brutal,” said Alberto Gonzalez, the owner of the Ayala hardware store in an upmarket Madrid neighbourhood as he took delivery of a dozen portable gas cookers from a manufacturer.

Previously it would take Gonzalez eight months to sell half a dozen portable gas cookers, whereas his most recent delivery sold out in an hour and a half, he said.

French sports retailer Decathlon told Reuters last week it has noticed a “generalised” increase in demand for camping equipment in Spain, such as cookers and camping gas.

Leroy Merlin, one of Spain’s largest hardware store networks, told Reuters that since October 25 the demand for lanterns has risen 230%.

Maximino Sordo, another hardware store owner, said he has finally shifted the lamps and gas cylinders that had been gathering dust in his store for years. “Because some have said we could all run out of electricity, people are panicking,” said Sordo.