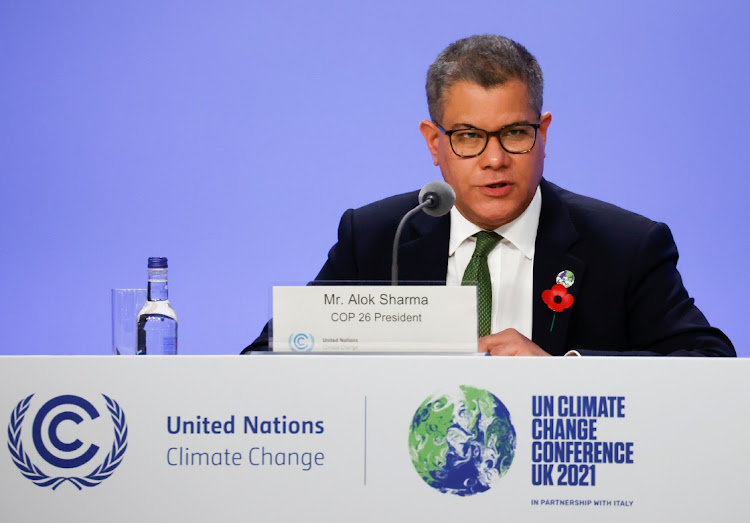 Glasgow — The president of the UN climate talks said on Tuesday there was still a mountain to climb towards a goal of capping the global temperature rise at 1.5°C, as a research group said existing pledges would allow the Earth to warm far beyond that.

Britain’s Alok Sharma told reporters that COP26 officials would soon publish the first draft of the so-called cover decision, which summarises the commitments of more than 190 countries, in a bid to focus minds in the three days remaining.

“We are making progress at COP26 but we still have a mountain to climb over the next few days,” he said.

“Frankly, on some vital issues there is still too far between us,” said Sharma, echoing what some developing nations’ delegations have been claiming of the G20 and developed world.

The Climate Action Tracker (CAT) research group put a sobering number on the size of that mountain, saying that all the national pledges submitted so far to cut greenhouse gases by 2030 would allow the Earth's temperature to rise 2.4°C from pre-industrial levels by 2100.

Scientists say 1.5°C — the aspirational goal set down in the 2015 Paris Agreement — is the most the Earth can afford to avoid a catastrophic rise in the intense heatwaves, droughts, storms, floods and crop failures that it is already experiencing.

To meet this goal, the UN wants to achieve “net zero” — where no more greenhouse gases are emitted than can simultaneously be absorbed — by 2050.

And it says that will be impossible unless emissions, mostly of carbon dioxide from burning coal, oil and gas, are cut 45% from 2010 levels by 2030.

CAT explicitly warned against assuming that longer-term “net zero” pledges would be met, since most countries have not yet implemented the short-term policies or legislation needed.

“It’s all very well for leaders to claim they have a net-zero target, but if they have no plans as to how to get there, and their 2030 targets are as low as so many of them are, then frankly, these ‘net zero’ targets are just lip service to real climate action,” said Bill Hare, CEO of Climate Analytics, one of the organisations behind the CAT.

Sharma acknowledged as much, saying: “The world needs confidence that we will shift immediately into implementation, that the pledges made here will be delivered, and that the policies and investment will swiftly follow.”

A key pillar of climate action is carbon pricing and trading — mechanisms that force polluters to pay a market price for their emissions, or pay others to offset them, by planting trees that bind carbon or investing in cleaner power.

COP26 is supposed to create a global framework for carbon pricing, but the problem has defeated the past two climate summits, and is in danger of proving insurmountable in Glasgow too.

“There’s a higher chance of getting a deal this time, but it could be very weak,” said Gilles Dufrasne, a policy officer with Carbon Market Watch. “Having no deal might hence be an acceptable outcome.”

Many campaigners including Greenpeace oppose the use of carbon offsets under any circumstances, saying they lessen the incentives for polluters to change their habits, and risk paying for changes elsewhere that would have happened anyway.

“Net zero does not mean zero,” warned Teresa Anderson, climate policy coordinator for ActionAid International. “In the majority of cases, these corporations ... are planning to carry on business as usual” for long periods, she said.

But some say things could be worse, noting how US President Joe Biden had promptly returned the world's second-biggest greenhouse gas emitter to the Paris Agreement, from which his predecessor Donald Trump had withdrawn, and pushed a $555bn climate package through Congress.

While it is far from clear how far the world will have moved on by then in trying to stop global warming, US Democratic legislator Alexandria Ocasio-Cortez said on Tuesday that the US certainly had.

“We're just here to say that we're not just back. We're different and we're more just. And we are more open-minded to questioning prior assumptions of what is politically possible,” she told a side event at the climate conference.

“And I would argue that it's a fundamentally different approach.”

Nigerians resort to burning charcoal again despite risks to health and ...

Nigerians resort to burning charcoal again despite risks to health and ...