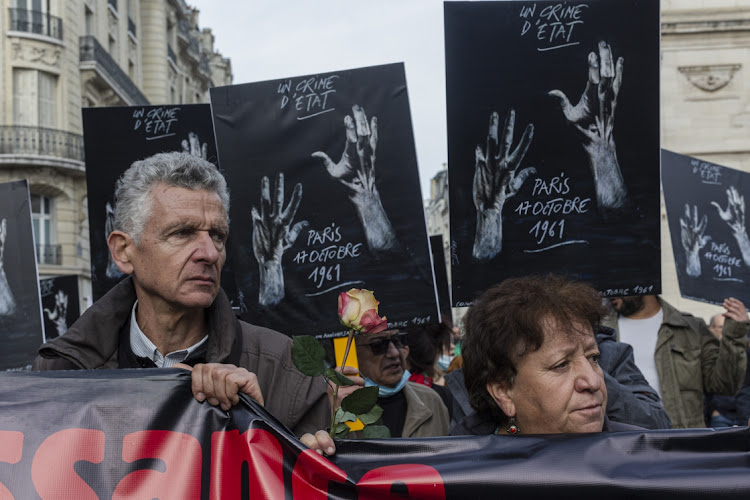 Members of France’s Algerian community march through Paris on Sunday to mark the 60th anniversary of a crackdown on protesters in the city. President Emmanuel Macron said the 1961 march, a protest against a curfew imposed on Algerians in and around Paris, was repressed ‘brutally, violently and in blood’. Picture: SAM TARING/GETTY IMAGES

Paris  — French President Emmanuel Macron on Saturday denounced as an “unforgivable crime” a bloody crackdown on Algerian protesters by police in Paris 60 years ago, the strongest recognition by a French president of a massacre in which many bodies were thrown into the River Seine.

On October 17 1961, under the orders of Paris’s notorious then-police chief Maurice Papon, police attacked a demonstration by 25,000 pro-National Liberation Front (FLN) Algerians protesting against a curfew imposed on Algerians.

The march was repressed “brutally, violently and in blood”, Macron’s office said in a statement, adding that about 12,000 Algerians were arrested, many were wounded and dozens killed.

Macron attended a ceremony commemorating the anniversary at the bridge at Bezons, west of Paris, from where some Algerians had started their march and where many bodies were recovered from the Seine. 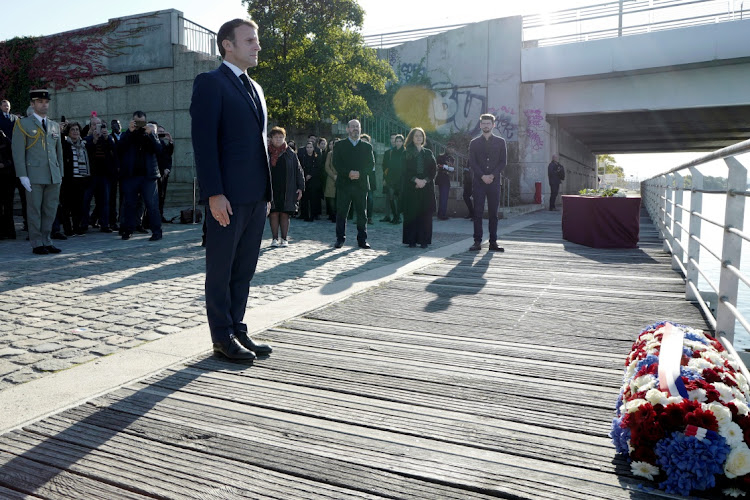 French President Emmanuel Macron stands at attention after laying a wreath near the Pont de de Bezons, Bezons bridge, during a ceremony commemorating the 60th anniversary of the massacre of October 17 1961, in Colombes near Paris, France, October 16 2021. Picture: RAFAEL YAGHBZADEH/REUTERS

Speaking at the Saturday commemoration of the 60th anniversary of the bloodshed, Macron told relatives and activists that the crackdown on the protest under Papon was an “unforgivable crime”. Papon was awarded the Légion d’honneur by former president Charles de Gaulle the same year as the Algerian killings.

He acknowledged several dozen protesters were killed, “their bodies thrown into the River Seine” and paid tribute to the memory of the victims.

“He admitted the facts: the crimes committed that night under the authority of Maurice Papon are inexcusable for the republic,” the Élysée Palace statement said.

The massacre, which took place during the war against French rule in Algeria, was long denied or concealed by French authorities. The first commemorations of the event were organised in 2001 by the mayor of Paris.

The precise number of victims was never established, with some historians putting it at more than 200 dead.

This year’s commemoration takes place amid diplomatic tensions between Paris and Algiers.

Early in October Algeria recalled its ambassador to Paris, citing comments attributed to Macron, who was quoted in the Le Monde newspaper as saying Algeria’s rulers had rewritten the history of its colonisation based on “a hatred of France”.