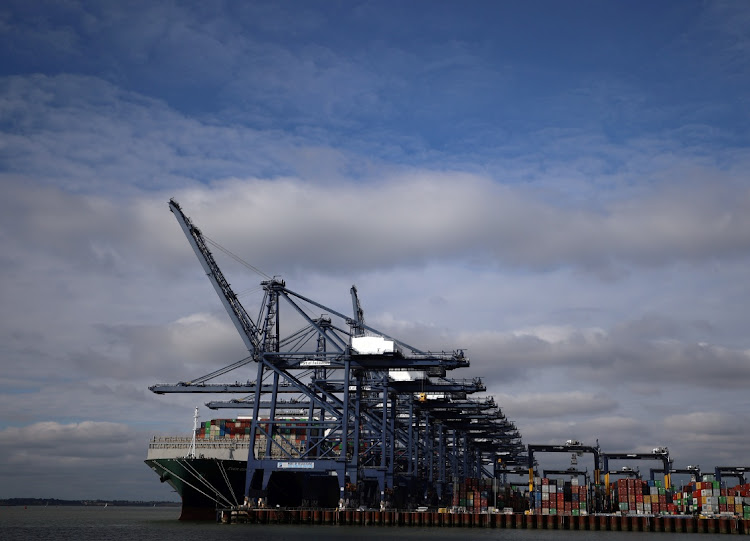 A view shows stacked shipping containers at the port of Felixstowe, Britain, on October 13 2021. REUTERS/HANNAH MCKAY

Sirens blared as cranes lifted containers from the Ever Genius, a ship stretching about 400m along a berth this week at the UK’s port of Felixstowe. The warning shrieks for British dockworkers might well have been alarms for the global economy.

Handling more than a third of the UK’s ocean freight, Felixstowe is battling a collision of incoming full containers and outgoing empties. Logjams like it are worsening around the world, including on the US West Coast, where Los Angeles port terminals will run 24 hours a day at the urging of President Joe Biden. A tropical storm in the Pacific, meanwhile, threatens to further slow shipping from Shenzhen to Singapore.

For the UK, the supply crunch is more acute because it is more dependent on trade than many other advanced economies and because Brexit exacerbated a trucker shortage. The shipping crisis is converging with spiking energy costs at just the wrong time if Christmas, as Prime Minister Boris Johnson promises, will be better than 2020’s locked-down holidays.

If goods shipped to the island nation from Asia are not on the water by now, experts doubt whether they will make it by December 25. The average door-to-door transit time for ocean cargo to the UK from Asia has risen to more than 70 days, up from about 55 a year ago, according to Hong Kong-based Freightos, an online shipping marketplace.

The congestion at Felixstowe is causing such long delays that Copenhagen-based AP Moller-Maersk, the world’s largest container carrier, has found it faster to reroute some larger vessels to mainland Europe to offload cargo onto smaller ships that return to UK ports. Felixstowe has just two berths for the industry’s biggest ships, but plenty of smaller docks, according to Maersk.

In a statement on Wednesday, Maersk said it is working closely with Felixstowe operators to help “alleviate the situation and steadily continue the evacuation of empty containers from the yard to make possible the discharge of full containers”.

The chief culprit is not so much overwhelmed port infrastructure but a lack of truck drivers to move the containers — a labour shortfall estimated at 100,000. The government has acknowledged that just 20 UK visas have been issued to heavy goods vehicle (HGV) drivers from abroad who took up the emergency offer of employment.

Felixstowe issued a statement this week saying the vast majority of import containers are cleared for collection within minutes of arriving and that there are more than 1,000 unused haulier bookings most days. It also said the situation “is improving and there is more spare space for import containers this week than at any time since the beginning of July when supply chain impacts first started to bite”.

Jon Swallow, cofounder of Felixstowe-based Jordon Freight, which moves goods between Britain and the EU, does not see the situation easing yet. “It’s definitely not getting better, that’s for sure,” he said. “There’s still no sign on the horizon of any EU drivers changing their minds. They’re busy doing other stuff in Europe. If demand continues, there is no solution.”

It is not just the boxes that are piling up at the UK’s busiest gateway for containerised goods — so are the headaches, the delivery uncertainties, and the shipping costs for importers and exporters.

Gary Grant, founder and executive chair of the UK toy shop The Entertainer, said he has 30 containers stuck at Felixstowe which are incurring storage costs. This compares to normal times when he never paid such fees because the containers were offloaded from the ships and transferred to warehouses as soon as they arrived in port.

“One container alone has already cost me £1,300 in storage costs. Some of my containers have been stuck at Felixstowe for three weeks when ordinarily we would clear them within two days,” he said in an interview. “So our costs are rising as we can’t get the containers out and it’s slowing down the availability of stock.”

Although The Entertainer’s shops are currently “rammed full of toys” as it had brought products in earlier, anticipating congestion problems, he expects “by the time we get to mid- to late November there will be widespread shortages of toys”.

“People are already starting to shop early for toys and in the end it’s customers that create shortages,” he said. J Sainsbury has pushed out its toy sale, usually held in October, to later in November to make sure it is stocked enough to meet anticipated demand at a time when the supply chain congestion is causing delays in shipments.

Britain may have to rely on a Dunkirk-style removal of goods from Europe.

Other retailers told Bloomberg customers should expect gaps on shelves because it will be harder to replenish fast-selling lines quickly. In a bid to prevent shortages of key items for Christmas, such as toys and decorations, retailers could deprioritise the delivery of other, potentially less essential items at this time of year, such as bedding and pillows.

Andrew Opie, director of food and sustainability at the British Retail Consortium, said retailers are trying to find alternative routes “but further disruption may be unavoidable”.

“This comes on the back of a very challenging 18 months for supply chains due to Covid-19 and the disruption to global shipping and transport logistics,” he said.

ParcelHero, a home-delivery service, said Britain might have to rely on a “Dunkirk-style” removal of goods from Europe, a reference to the hundreds of civilian boats that helped rescue English troops from the European mainland in World War 2.

“Retailers are going to have to reprioritise their orders from overseas, and shoppers will need to pounce on items online and in-store as early as possible, in case shortages escalate further,” said David Jinks, head of consumer research at ParcelHero.

Across the Felixstowe complex, which is run by Hutchison Ports, containers were stacked five high in yards that looked close to capacity.

The walk to find evidence of supply shortcomings was not long: some shelves of household goods at a nearby Lidl supermarket were empty late on Wednesday, with the store posting a sign saying it was sorry that “some products may be delayed due to recent unforeseen events”.

System deters investment in energy efficiency because rates are based on property values, business groups say
World
8 months ago

The EU’s chief Brexit negotiator is likely to offer to cut as much as 50% of the customs checks in Northern Ireland and up to 80% of the sanitary ...
World
8 months ago
Next Article